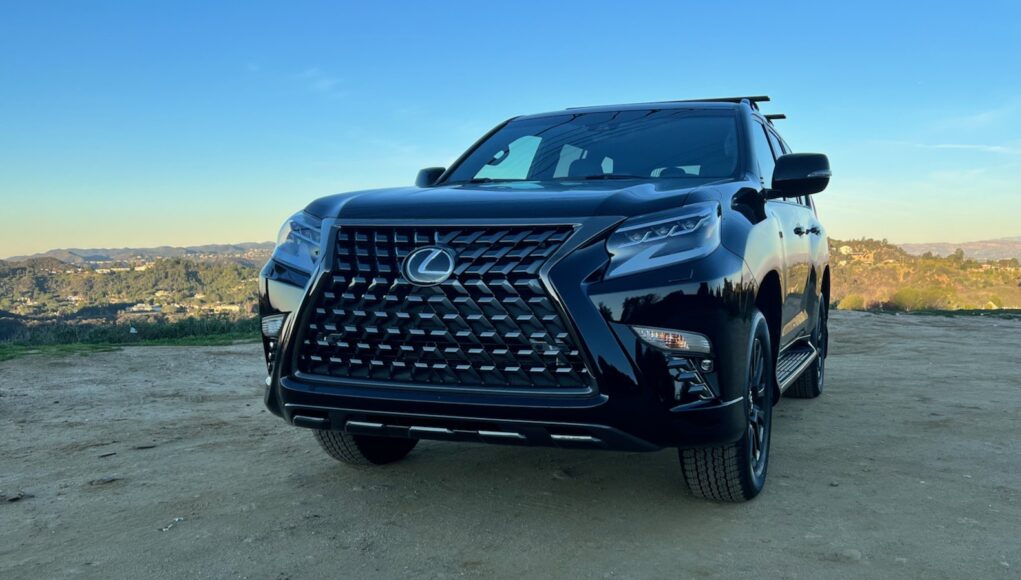 If you’re looking for a rugged and luxurious SUV that is just at home on the trails as it is in a mall parking lot, the Lexus GX 460 is for you. For the 2022 model year the GX has received a few updates to make it feel and look a bit more modern, but under the skin it’s still the same rugged and old-school SUV.

The big update for the 2022 GX is the new 10.3-inch touchscreen with Apple CarPlay and Android Auto connectivity. The infotainment system can be operated either by your fingers or the touchpad on the center console, but you’ll definitely not want to use the touchpad. Buyers can also select the new Black Line Special Edition Package that adds gloss black wheels, black window trim, black roof rails and dark tinted taillights, in addition to a few additions inside. Lastly the 2022 GX also now comes standard with parking assist, navigation, and power folding and heated mirrors. And that’s pretty much it for the GX, which is great for off-roading enthusiasts, but there are some compromises for buyers that possibly want a more car-like driving experience.

Unlike most luxury SUVs, the GX is based on a truck platform, which gives it the rugged capability, but also has some design and comfort compromises. Under the hood it’s powered by an old school 4.6-liter V8 with 301 horsepower and 329 pound-feet of torque, that’s mated to a six-speed automatic transmission. With just over 300 hp and only six-gears, the GX 460’s powertrain doesn’t feel as modern as some of its rivals. Acceleration is merely adequate, since it takes 7.8 seconds to reach 60 mph and the transmission doesn’t react as fast as we’d like. The good news is that GX can tow up to 6,500 pounds with the optional tow kit.

On the road the GX 460 has a rough ride thanks to its solid rear axle. Encountering any bumps or potholes on your drive throws the GX 460 off balance a bit. If smooth and comfortable are to traits you want, you’ll want to look at something else. On pavement the GX’s ride and handling leave you feeling a bit jolted. Throw in the vague steering and the GX is not very fun to drive. There’s too much body roll and its brakes also don’t feel up to the task to bring the big SUV to a stop.

Once the road ends the GX stands out with its lockable limited-slip differential and low-range 4WD mode. The V8’s torque also provides a good amount of power to help you climb over the rocks with ease.

Inside the GX’s interior feels luxurious, but you can easily see how old the GX is as well. The current generation GX has been around for 12 years, so it’s easy to see where it’s not very modern. There isn’t a digital gauge cluster and there are plenty of buttons and switches that feel dated. The CD changer also falls in line with how old the GX is.

There are three rows of seats, but the third row is strictly for children, since there’s very little legroom back there. Also if you need to carry any sizable amount of cargo, you’ll not like the fact that there’s very little cargo space with the third row up. There’s only 11.6 cubic feet of space behind the third row, which falls short compared to some of the GX’s rivals. The front seats are comfy, but the second row seats aren’t comfortable at all, since they are pretty hard.

On the safety front, the 2022 GX comes standard with automatic emergency braking, lane-departure alert, blind-spot monitoring, adaptive cruise control and automatic high beams. The GX has a hydraulic power steering system instead of the electric systems you see on the latest models, which is why it doesn’t offer a lane-keeping assist system. The adaptive cruise control also doesn’t work below 32 mph, which can be annoying in heavy traffic.

At the end of the day, the Lexus GX 460 knows what it is and what it’s not. It’s a rugged SUV with a body-on-frame design that makes it the perfect companion when the pavement ends. On the road, its old-school platform is not as efficient or sporty as some of the GX’s newer rivals. This makes the GX more of a niche player than a mainstream SUV, since most buyers rarely ever go off-road, so they will never experience the GX’s strong points.