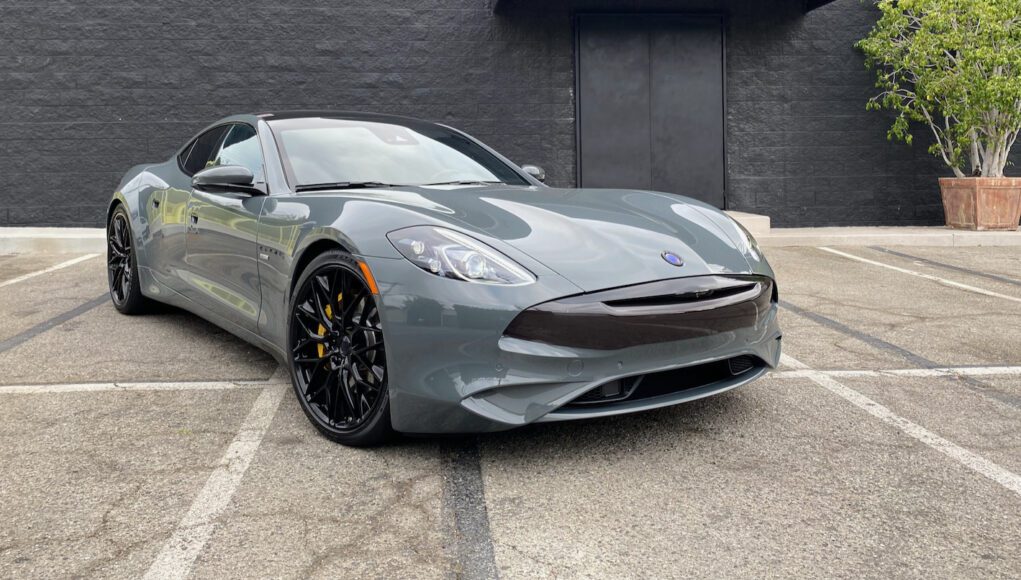 What do we have here? Well it’s the Karma GS-6, which is basically the same as the Revero GT. Not only does the GS-6 get a new name, but it’s also now a bit more affordable.

Now that the GS-6 is more affordable, the plug-in hybrid sedan has a better chance of stealing buyers from Tesla, Mercedes-Benz and Porsche. The good news is that Karma has also confirmed that it will introduce a fully electric GS-6 soon.

The Karma GS-6 is an extended range electric vehicle, since it has a small gas engine that acts like a generator when the battery is depleted. There are two motors at the rear, one for each axle, that generate a combined 536 horsepower and 550 pound-feet of torque. The GS-6S boosts the torque rating to 650 lb-ft.

In electric mode the GS-6 can travel up to 80 miles thanks to its 28-kilowatt-hour battery pack. Once those 80 miles are up, a BMW sourced 1.5-liter three-cylinder engine charges the battery and the electric motors. Thanks to the small gas engine, the total driving range is 360 miles.

The engine doesn’t directly power the wheels, so you can think of the GS-6, just like the retired Chevy Volt an BMW i8. Speaking of the i8, the GS-6 has the same engine.

The GS-6 features a 6.6-kW charger and when it’s plugged into a Level 2 charger, it only takes four hours to recharge it. A 45-kW DC fast-charger can charge it up to 90% in only 35 minutes.

With the gas engine adding the power, the fuel efficiency of the GS-6 drops to an EPA-estimated 26 miles per gallon. It jumps to 70 MPGe in battery mode.

You’ll notice that the GS-6 has paddle shifters, but the plug-in hybrid does not have a traditional transmission with gears to select from. Instead the paddle shifters are used to toggle better the GS-6’s three driving modes and three regenerative braking levels. The left paddle shifter lets you select between: Stealth, Sustain and Sport modes. The Stealth mode is the fully electric mode, while the Sustain mode maintains the current battery level, by activating the generator when you reach about 25 mph. The Sport mode uses the range extender to provide an even more fun driving experience.

A plug-in hybrid is the best compromise for buyers that want an electric car, but worry about range anxiety. This is what makes the GS-6 great, since it has more than enough electric range for your daily commute and then if you want to go on a longer trip, you can simply fill up the gas tank and keep going down the road.

In electric mode, the GS-6 is a sporty electric sedan with a 0-60 mph time in 4.5 seconds, which drops to 3.6 seconds for the GS-6S. The GS-6 hugs the road thanks to its low center of gravity. What body roll?  It’s nicely weighted steering and Brembo brakes are perfect.

Inside the interior feels and looks luxurious with its high quality leather and carbon fiber trim. There’s a 10.2-inch touchscreen with Apple CarPlay and Android Auto, but it doesn’t have a navigation system. That may seem a bit weird that a car in this price range doesn’t have a navigation system, but when was the last time you relied on one, thanks to Apple CarPlay and Android Auto.

In front of the driver, there’s a digital instrument cluster, which can be operated via capacitive controls on the steering wheel. The small pads aren’t exactly easy to use, since it’s easy to tap the wrong setting.

There isn’t a bad seat in the house, even in the rear. It’s a bit snug, but we managed to fit two six-feet tall friends without either of them complaining about a lack of legroom. We also like the comfy supportive seats.

At the end of the day the Karma GS-6 is a great plug-in hybrid sedan for EV buyers that want a stylish electrified sedan, but aren’t quite ready to go fully electric. But at the same time, this is also what hurts the GS-6, since it’s competing with several fully electric sedans, like the Tesla Model S, Lucid Air and Porsche Taycan.

Luckily a fix is coming soon, since the all-electric GSe-6 is slated to arrive by the end of the year.