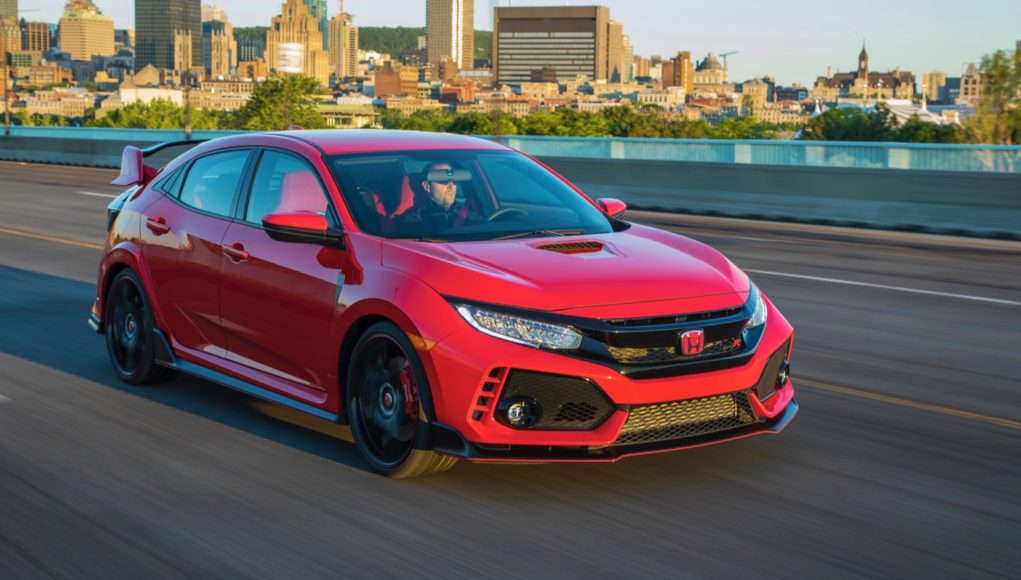 Just do a simple Google search for “hot-hatch” and you’ll likely see countless stories about the VW GTI. Why is that? Well it’s been the benchmark of the segment since it arrived in the US in 1983. Today there’s a few more options, like the new Veloster N, but one model is ready to take the crown, the Honda Civic Type R.

Many buyers may not know what “Type R” means, since it’s been almost a decade since Honda sold the only other Type R, in the US, the Acura Integra Type R. Well as its name suggests, the Type R is all about the racetrack. With its 306-hp turbocharged engine, nearly perfect chassis and in your face styling, the Civic Type R is ready to battle other hot-hatches, like the GTI, Golf R, and Veloster N.

Starting with the already good Civic hatchback, the Civic Type R dials up the performance to a 10 with its 2.0L turbocharged four-cylinder engine with 306 horsepower and 295 lb-ft.of torque. The four-cylinder is mated to an excellent six-speed manual transmission that sends its power to the front wheels. You might think that much power going to the front wheels would come with a lot of torque steer, but Honda’s engineers managed to get rid of that thanks to its dual-axis struts. A mechanical limited-slip front differential has also been added to keep the front wheels from spinning. The Civic Type R also gets a unique rear suspension and three-way adjustable solenoid-valve adaptive dampers have been added.

On the outside you’ll immediately notice how much meaner the Civic Type R looks compared to the standard Civic hatchback. Its face is similar, but the hood scoop, wider fenders, massive rear wing and sportier exhaust help it stand out. The look is a bit polarizing and definitely not for those that prefer to blend in, in a crowd. It’s more “boy racer” than the more mature Golf R.

Inside the biggest upgrade are the bright red and black front seats that are wrapped in a suede-like material. The seats are wide and heavily bolstered to keep you from sliding around when the road gets twisty or your flinging the Civic Type R around on a racetrack. In the rear the full bench seat has been swapped out with two bucket seats. There aren’t options on the Civic Type R, since it only comes in one trim level – Touring. That means the interior is packed with features, like a navigation system, 7-inch touchscreen and a 12-speaker 540-watt audio system with Apple CarPlay and Android Auto compatibility.

The interior doesn’t feel as luxurious as the Golf R with its Audi-esque feel, but then again the Golf R is not a track car like the Civic Type R. The Civic Type R is missing the Honda Safety Suite, which means that you don’t get features, like emergency braking or adaptive cruise control.

During our trek around the hills in the Santa Monica Mountains, in Los Angeles, the Civic Type R proved it has what it takes to battle and come out on top against its rivals, like the Golf R, Subaru WRX STI. The chassis is unflappable and the even with all that power going to the front wheels, the lack of torque steer made us forget all about which wheels were pulling the Civic Type R out of a corner. It easily out handles the Golf R and it will probably beat the Subaru WRX Type RA around the track.

The Civic Type R is an excellent performer when you’re charging up a back country road, but since it is a Honda, it still has a big dose of practicality thrown in. The Civic Type R is rated at 22 mpg in the city and 28 mpg on the highway, which isn’t that bad considering the engine is pumping out over 300 horsepower. To compare the Civic Hatchback Sport with the six-speed manual is rated at 29/38 mpg, but it only brings 180 horsepower to the table. There are also three driving modes that adjust the suspension, throttle response and steering: Comfort, Sport and +R. As you’d expect the +R mode is the sportiest setup, but if you’d prefer a calmer drive home from the office, the Comfort mode actually calms things down a lot.

After spending time with the 2019 Honda Civic Type R, it’s easily the most fun front-wheel drive car we’ve driven in a long time. It brings back fond memories of Honda’s past, like the original NSX and Integra Type R. It’s styling may not be for everyone, but one lap behind the wheel and you’ll be hooked.