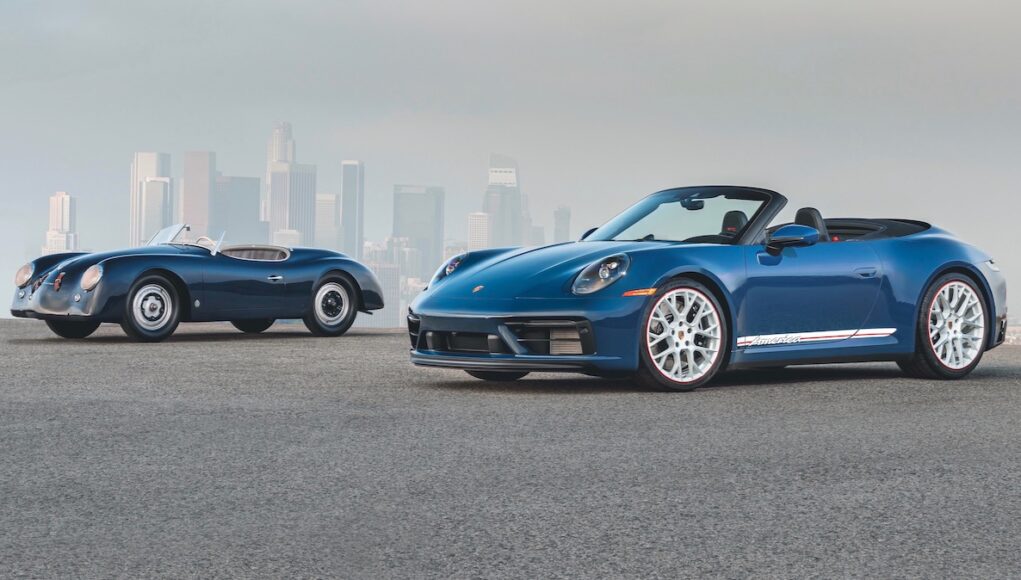 The first Porsche cars sold in the U.S. began with the 356, in 1950 when they were imported by Max Hoffman. Following the sales success of the 356, Hoffman convinced Porsche to develop a lightweight and more affordable version for the U.S. market. This gave birth to the 1953 356 America Roadster. 70 years later and Porsche is celebrating the 356 America Roadster with the special 2023 Porsche 911 GTS America Edition.

On the outside this special 911 receives its distinct look from Porsche Exclusive Manufaktur. It’s painted in Azure Blue 356, which was inspired by the 356 America Roadster. The windshield frame is painted in Black and it rides on special white RS Spyder Design wheels. There are also white decals with Guards Red accents that read “America” while the model designation on the rear features “911 Carrera” in white and “GTS” in Guards Red.

Inside there’s Guards Red stitching and Pebble Grey throughout.

The 911 Carrera GTS Cabriolet America is powered by a twin-turbocharged 3.0-liter boxer six-cylinder engine with 473 horsepower and 420 pound-feet of torque. It also gets the Porsche Active Suspension Management (PASM) Sport that lowers the ride height by 10 mm while adding helper springs to the rear axle. Other add ons include a Sport Exhaust and the Sport Chrono Package, while rear axle steering and Porsche Ceramic Composite Brakes (PCCB) are available.