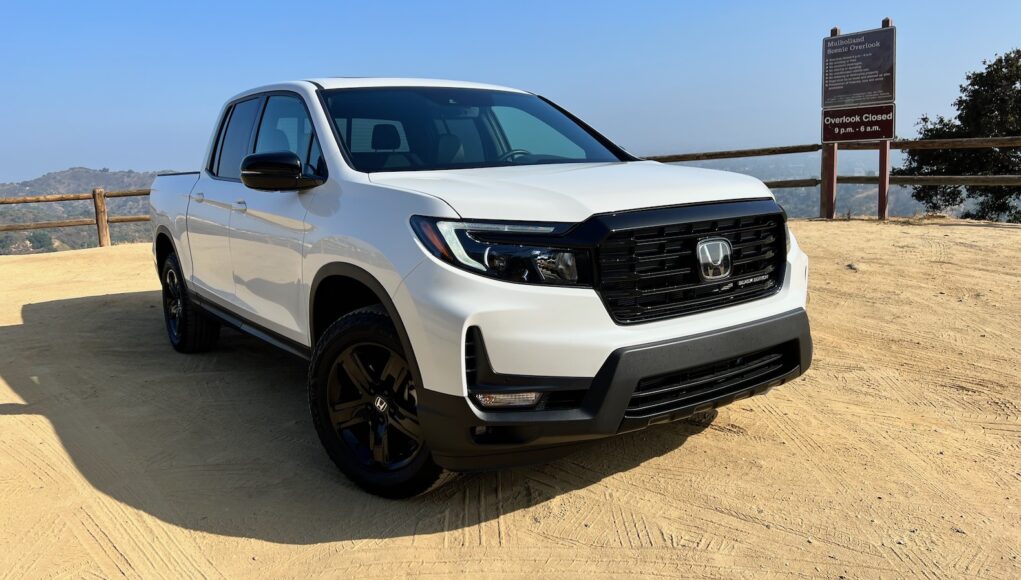 It looks like unibody based pickups might be the next big thing, with the introduction of the Ford Maverick and Hyundai Santa Cruz. But we can’t ignore the 2022 Honda Ridgeline, which up until now has been the only truck based on a crossover platform available. The midsize Ridgeline is a stand out with its refined driving dynamics, spacious interior and neat tricks in its bed.

The Ridgeline is based on the same platform as the Passport and Pilot SUVs. When the current Ridgeline debuted, it was criticized for not looking as rugged as truck buyers prefer. Fortunately Honda gave the Ridgeline a big facelift last year to give it a more truck-like face to make it look less like a crossover. The styling updates were a big upgrade, but we wish Honda would take it a step further, lets hope a more rugged Ridgeline TrailSport is in the works.

Inside the Ridgeline’s interior is nearly identical to the Passport and Pilot. This means that it feels more car-like inside than other midsize rivals, like the Nissan Frontier and Toyota Tacoma. That’s great for most buyers, since the Ridgeline’s interior is more comfortable than any of its rivals. Although the Ridgeline has a similar footprint as other midsize pickups, its interior is more spacious, especially in the second row. The Ridgeline is also pretty wide, since it’s 5.3 inches wider than a Ford Ranger, which means there’s a lot more shoulder room. One cool feature is the rear seat that can be flipped up to provide enough room for a full-size bicycle.

One of our biggest gripes with the Ridgeline is its 8.0-inch infotainment system, which has dated graphics, a weird menu structure and reacts slowly. The small digital screen in the gauge cluster also looks dated, making the Ridgeline feel like it needs a major interior refresh to make it look and feel more modern.

At the rear the bed measures 5 feet 3 inches, which is on par with other short beds that come with midsize crew cab pickups. Where the Ridgeline stands out is with its in-bed trunk – a 7.9 cubic space below the bed’s floor that can store suitcases and other gear. The Ridgeline also has a cool Dual Action Tailgate that allows it to either drop down like a traditional truck or swing out like a door. Lastly if you like to tailgate, the top spec Ridgeline comes with a fun Truck-Bed Audio System that essentially turns the bed into a big speaker. The audio system can be powered on at speeds below 10 mph, which means that if you’re cruising in a parade, you can blast your favorite tunes.

Under the hood there’s only one powertrain to choose from. The Ridgeline is powered by a 3.5-liter V6 with 280 horsepower and 262 pound-feet of torque, that’s mated to a nine-speed automatic transmission and a torque-vectoring all-wheel drive system. Honda did offer a front-wheel drive version, but that option has been discontinued. The V6 is smooth and the powertrain is more responsive than you get with the V6-powered Tacoma.

The Ridgeline is rated at 18 mpg city, 24 mpg highway and 21 mpg combined, which is only slightly better than the Toyota Tacoma’s 18/22/20 mpg rating.

The Ridgeline is easily the best handling midsize pickup with its smooth ride and controlled body motions. Since it’s based on the same platform as the Passport and Pilot, it shouldn’t be a surprise that the Ridgeline drives more like a crossover than a body-on-frame pickup. The Ridgeline feels more agile than the Tacoma and Ranger pickups with an overall driving experience that feels far more refined.

Since the Ridgeline isn’t based on a rugged body-on-frame platform there are some downsides. It only has 7.6 inches of ground clearance and can only tow up to 5,000 pounds. Several of its rivals can tow over 7,000 pounds. Also although the all-wheel drive system does perform well, it still is not match for a traditional four-wheel drive system when you’re hitting the trails. Lastly there aren’t any skid plates or underbody protection to keep you from damaging the Ridgeline.

At the end of the day, the Honda Ridgeline offers mostly everything that truck buyers want with a level of refinement that is unmatched in the midsize truck segment.