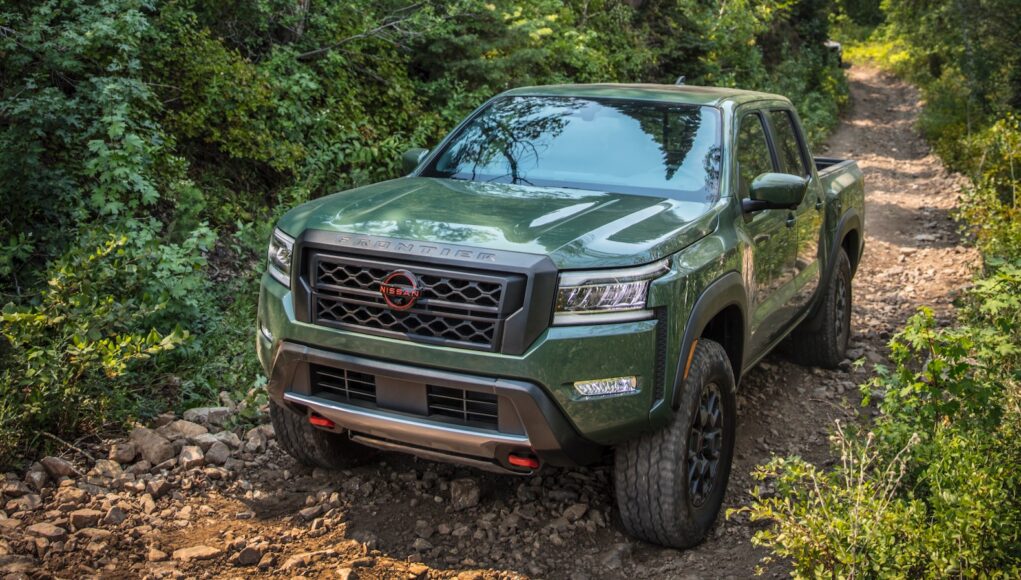 It’s hard to believe that the last generation Nissan Frontier stuck around for over 15 years, but now we finally have a new one. The 2022 Frontier looks and feels far more modern than its predecessor, which makes it much better rival to other popular midsize pickups, like the Ford Ranger and Toyota Tacoma.

The 2022 Frontier definitely looks the part with its blocky styling – making it look tougher than the last Frontier. At the front the headlights look modern, helping the Frontier stand out from its rivals. Overall the new look is major step forward, easily making it one of the best looking midsize pickups. If you opt for the Pro-4X version, the Frontier looks even more rugged with its beadlock-style wheels, Hankook all-terrain tires, step rails and a sport bar over the bed. Buyers can also choose from two configurations, the extended King Cab and Crew Cab body styles with five- or six-foot cargo box lengths.

Under that new sheetmetal, the 2022 Frontier keeps the same frame as the last generation. The Frontier gets revised spring and damper tuning, a rear anti-roll bar, new urethane jounce bump stops and new hydraulic body mounts. The Pro-4X or Pro-X versions add Bilstein dampers. One old school thing that managed to stick around is the hydraulic rack-and-pinion steering system, instead of an electric power steering system. The steering can be a bit heavy at times, but Nissan says that the steering gear ratio has been increased by 16 percent.

Under the hood there’s only one engine to choose from, the same 3.8-liter V6 from the outgoing Frontier. It generates 310 horsepower and 281 pound-feet of torque. The V6 is mated to a nine-speed automatic transmission. Around town the powertrain feels refined, while the acceleration is ok. The naturally aspirated engine doesn’t have the low end torque that you get with a turbocharged engine, like you’ll find in the Ranger.

The Frontier Pro-4X is the version to get if you like hitting the trails. It easily tackles the trails, but unlike the Chevy Colorado ZR2 or Toyota Tacoma TRD Pro, the Pro-4X doesn’t make a compromise on paved roads. While some trucks offer a full time automatic 4×4 system, the Frontier only offers high- or low-range part-time four-wheel drive. The Frontier can tow up to 6,720 pounds and haul a payload up to 1,600 pounds. Those specs aren’t class leading.

Inside there are even bigger improvements with a more modern interior that’s a vast improvement over the last Frontier. The interior features a simple layout with updated tech and improved controls. There is a bit of more hard plastic than we expected, but the materials are on par or better than what you’ll find in the Chevy Colorado, Ford Ranger or Toyota Tacoma. The interior is spacious and comfortable, but we don’t understand why the steering column doesn’t telescope.

On the tech front, there’s a 7-inch digital display that’s flanked by analog gauges in front of the driver and you can choose either an 8- or 9-inch touchscreen infotainment system. Wireless charging, a Wi-Fi hotspot and an 10-speaker Fender audio system are also available. As expected Apple CarPlay and Android Auto are included, which improves the embedded navigation that looks a bit old. The backup camera also looks dated.

The packaging for the driver assistance safety tech is a bit odd, since the Frontier only comes standard with forward collision warning. You have to add the $990 Technology Package to get adaptive cruise control, automatic emergency braking, lane-departure warning, blind-spot monitoring and rear parking sensors. You’ll notice a lane-keeping assist system isn’t available due to the old-school power steering system.

The 2022 Nissan Frontier is a vast improvement over its predecessor with its rugged good looks, more modern interior and refined powertrain. It easily stands out from its aged rivals, like the Chevy Colorado, GMC Canyon and Toyota Tacoma.