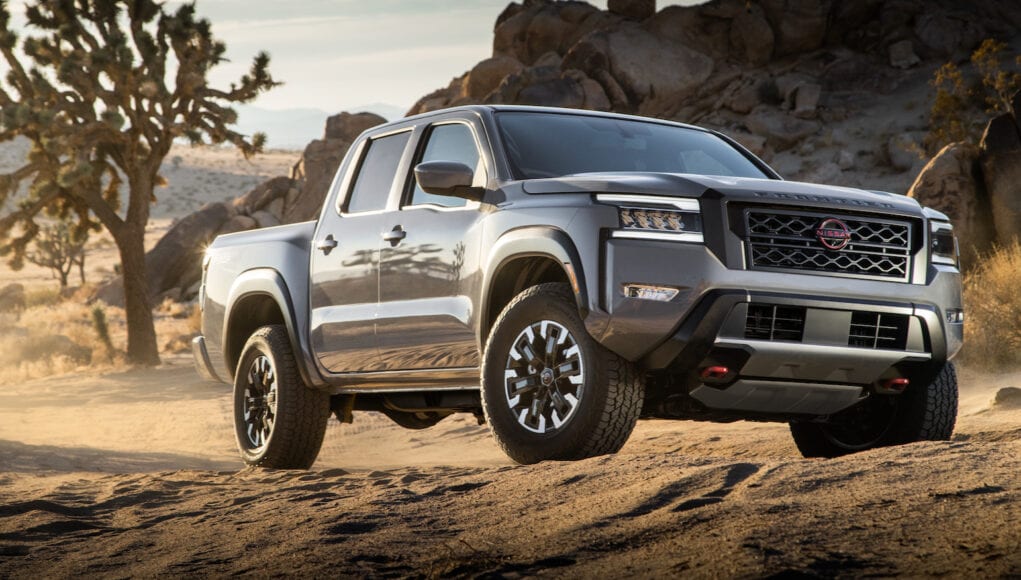 Nissan has unveiled the 2022 Nissan Frontier, which is the first new Frontier in 16 years. The big news is that the Frontier is now almost completely all-new with the exception of its frame, which dates back to 2005.

On the outside the new Frontier borrows many styling cues from the larger Titan. It now looks modern and more rugged. Nissan says that the more aggressive styling is inspired by the Nissan Hardbody truck from the 1980s and 1990s.

The Frontier will be offered in extended King Cab and crew-cab body styles with five- and six-foot cargo box lengths.

The 2022 Frontier is about the same size as its predecessor, with its length increases a few inches and its width increasing a tiny bit.

Although the Frontier’s frame carries over, its suspension has been upgraded with revised spring and damper tuning, a rear anti-roll bar and new urethane jounce bump stops. There are also new hydraulic body mounts. If you select the Pro-4X or Pro-X, you’ll also get Bilstein dampers. There are a still old school parts, like its hydraulic rack-and-pinion steering system, but its steering gear ratio has been increased by 16 percent. The four-wheel drive system also doesn’t offer a full-time all-wheel drive mode.

Under the hood there’s only one engine available, a 3.8-liter V6 with 310 horsepower and 281 pound-feet of torque, that’s mated to a nine-speed automatic transmission.

Inside the upgraded interior gets a 7-inch display that’s flanked by analog gauges in front of the driver and an 8-inch infotainment touchscreen. Higher trim levels get a larger 9-inch display, but both systems have Android Auto and Apple CarPlay.

The interior also has other available features, like a heated steering wheel, a Wi-Fi hotspot, a nine-speaker Fender audio system, a wireless charging pad and a 360-degree camera system with a front-facing off-road mode.

The 2022 Nissan Frontier will arrive this summer.