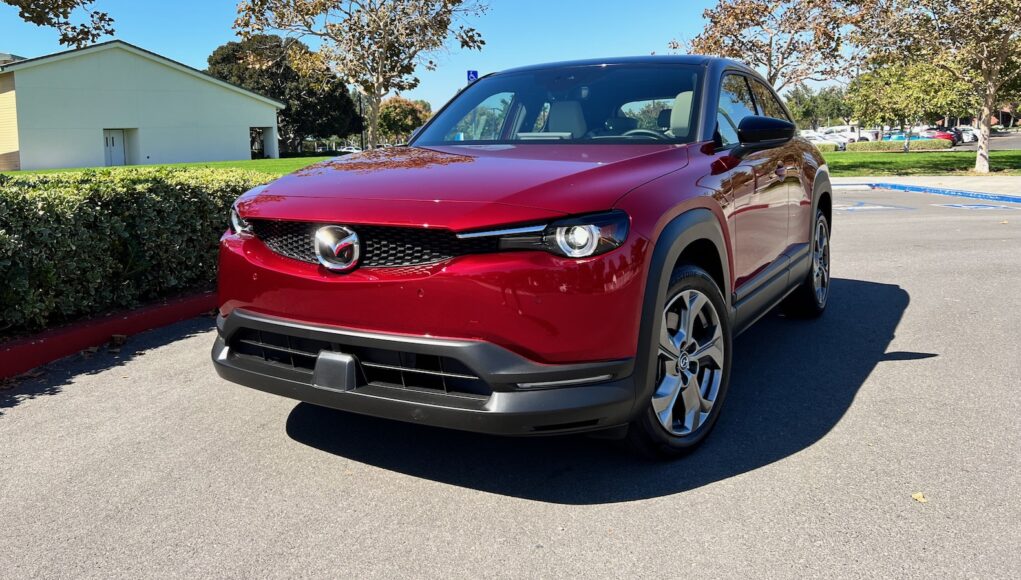 What we have here is Mazda’s first electric car for the U.S. – the 2022 MX-30. It’s an electric crossover that shares its platform with the CX-30, but it stands out with its unique styling and sustainable interior. With the growing number of electric models entering the market, how does the MX-30 compare? Is it a worthy rival to other attainable electric crossovers, like the Chevy Bolt, Hyundai Kona Electric or Kia Niro EV?

Mazda invited us to Irvine, California to spend some time with the MX-30 and although it does have some shortcomings, there were also a few good surprises as well.

The MX-30 is smaller than the CX-30 and gets rear-hinged “freestyle” doors that function similar to the BMW i3. It’s clear that the MX-30 was designed for urban dwellers that probably don’t have kids yet. Why? Well getting into the front two seats is easy, but getting in the rear involves a bit more effort and once you’re back there, you’ll notice that headroom and legroom suffers a bit. The rear seat feels a bit claustrophobic, but for short trips the MX-30 will be up for the task.

Since the MX-30 shares its platform with the gas-powered CX-30, the overall layout of the MX-30 is closer to the CX-30 than what we expect from an electric car that was designed from the ground up to be one. In the front there’s an electric motor, which sits where the gas engine is in the CX-30, but it’s missing the front trunk (frunk) that we’re used to in electric vehicles. There’s also a lot of unused space under the hood, which Mazda says will be used by the MX-30 plug-in hybrid, which is coming next year.

The MX-30 is labeled as a crossover, but it only features a single motor that powers the front wheels. The electric motor generates 143 horsepower and 200 pound-feet of torque. As you’d expect that much horsepower isn’t going to get you away from a stop light every fast. In our initial tests the MX-30 was able to hit 60 mph in around nine seconds. The MX-30 can take off from a stop fast due to the instantaneous torque, but the electric motor tops out fast. If you’re expecting acceleration like the Mustang Mach-E or Tesla Model Y, you’ll be disappointed, but the MX-30 isn’t designed to be a performance oriented electric crossover. Instead it’s a small electric crossover that’s designed for your every day commute.

Speaking of your commute, the MX-30 won’t be able to take you much farther than around town, since it only has a 100 mile range due to its small 35.5 kWh battery. Mazda says that it designed the MX-30 to be more attainable with a smaller and cheaper battery for buyers that don’t want to spend the extra premium for an EV that has a range twice as much as the MX-30. If you think about it rationally, the MX-30 can easily fill your needs, since according to Mazda most drivers don’t drive over 100 miles a day, it’s closer to a third of that.

It remains to be seen if Mazda can position the narrative to focus more on driver’s day to day needs and not long road trips. The MX-30 can probably do what you need it to do during the week, but if you want to take a road trip on the weekend, the 100 mile range is going to come up short. One of the biggest reasons why car buyers don’t buy electric vehicles is range anxiety and unfortunately the MX-30 doesn’t kill those fears.

Range issues aside, the MX-30 drives just like you expect from a Mazda, which is great. The MX-30 isn’t fast, but it’s driving dynamics are actually better than the CX-30. We can credit this to better weight distribution, since most of the weight has been positioned rearward compared to the front heavy CX-30. Mazda also says that the MX-30 is 45 percent more rigid than the CX-30 and it also gets stiffer tires that improve the steering response.

On the back roads in Irvine, the MX-30 feels more planted to the road than the CX-30 and it’s steering feedback is better than some of its rivals. Push the pedal to the floor and the MX-30’s powertrain responds immediately. You can kind of think of the MX-30 as the MX-5 of the small electric crossover segment. It doesn’t have as much power as its rivals, but the overall driving experience is far more engaging, especially compared to the Nissan Leaf.

Inside the snug interior stands out with its sustainable materials, like cork. Mazda applied cork to the center console and doors to give it a unique touch. Some of the materials are made of 20 percent recycled materials and the door trim is made from recycled PET bottles. The interior looks and feels modern with its 8.8-inch infotainment display and a 7-inch touchscreen for the climate controls. The lower screen is easy to use, but using the infotainment system means that you have to use a rotary dial on the center console. It’s one of the low points of the MX-30, since it’s not easy to use. Simple things like entering a location or switching the layout of the screen takes too much effort.

There’s also an available 12-speaker Bose audio system and the MyMazda app lets you turn on the climate control from your phone before you’re ready to go so the interior is comfortable right from the start of your trip.

The MX-30 is offered in two trim levels: base and Premium Plus Package. It starts at $34,645, including the destination fee. The good news is that Mazda’s EVs are still eligible for the full $7,500 federal tax credit and if you factor in the rebate in California, the MX-30 effectively starts in the mid-$20k range. We only mention California here since that’s the only state that the MX-30 will be available in initially. Mazda says that it plans to expand availability to other states, but it hasn’t announced which ones.

Mazda has pretty modest goals for the MX-30, since it only plans to sell 560 units in its first year. It’s not known if that low number is due to production restraints or the fact that Mazda doesn’t expect huge demand for the fully electric MX-30. The MX-30 plug-in hybrid will likely be more appealing to EV buyers, but we don’t know how much further it will be able to drive thanks to its rotary range extender engine.

The good news is that the MX-30 is just the beginning of Mazda’s electrification plans, since its planning to offer three electric vehicles by 2025. Mazda is also working on five plug-in hybrid and five hybrid vehicles, which are part of its plans to become carbon neutral by 2050.