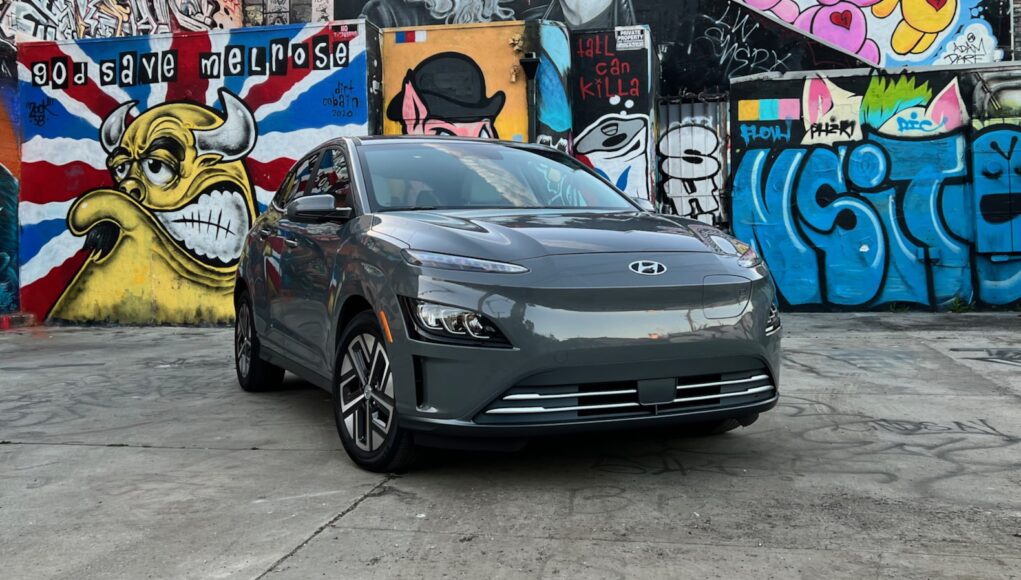 Electric car buyers are getting a lot more choices lately with all the recent EV introductions. While many buyers probably wish they could afford a Tesla Model Y or even the Ford Mustang Mach-E, there are some more affordable options, like the Hyundai Kona Electric. The Kona Electric easy to swallow $35,245 starting price means that it actually starts below many of its rivals, like the Chevy Bolt EUV, Kia Niro EV and Volkswagen ID.4.

The Kona Electric is powered by a single 201 horsepower electric motor that powers the front wheels and a 64.0-kWh battery pack. Around town the Kona Electric feels more lively than the regular Kona, thanks to the immediate torque that the electric motor provides from a stop. It’s not as sporty as the Mustang Mach-E, but it is fun to drive. The only downside is that the Kona Electric is not available with all-wheel drive. The big battery mounted in the floor also helps the Kona Electric feel more planted to the road at higher speeds. Speeding around corners is not as fun as other EVs, since there is a noticeable amount of body roll. Plus the steering can be a bit vague.

While some automakers like Mazda think it’s ok to release an EV with only 100 miles of range, Hyundai is taking the more popular approach. The Kona Electric has a driving range up to 258 miles. There are four modes for the regenerative braking system, with the most aggressive setting allowing for almost one-pedal driving. The regen system doesn’t bring the Kona Electric to a full stop, but it does slow the EV considerably.

You can recharge the Kona Electric using a 100kW DC fast charger up to 80 percent in 47 minutes, while a Level 2 charger will take over 9 hours to fully recharge it.

Inside the Kona Electric’s interior is nearly identical to the gas-powered version. The only big difference is the button system that replaces a traditional shift lever. There are two infotainment screens available. The standard version uses an 8.0-inch screen, while the Limited trim level gets a nicer 10.25-inch touchscreen. The only weird thing is that wireless Apple CarPlay and Android Auto are available with the smaller screen, the larger screen requires that you still plug your phone in. The Kona Electric also comes standard with a 10.25-inch digital instrument cluster. Other available tech features, include wireless phone charging, the Hyundai Digital Key and an eight-speaker Harmon Kardon audio system.

The Kona Electric’s interior is comfortable, but the big issue is the amount of space inside. The interior feels tight with less headroom and legroom than a Chevy Bolt. There’s only 33.4-inches of rear legroom compared to 36.0-inches in the Bolt. Cargo space is also not plentiful with only 19.2 cubic feet of space behind the second row.

On the safety front, the Kona Electric comes standard with automatic emergency braking, a blind-spot monitor with collision-avoidance assist, lane keeping assist, and rear-cross traffic avoidance assist. Adaptive cruise control with stop and go functionality is only available on the Limited trim level, which starts at $43,745.

At the end of the day the 2022 Hyundai Kona Electric is the perfect EV for buyers on a budget. It’s easy to swallow starting price and 268 mile range are appealing, plus it does without the weird styling of some other EVs.