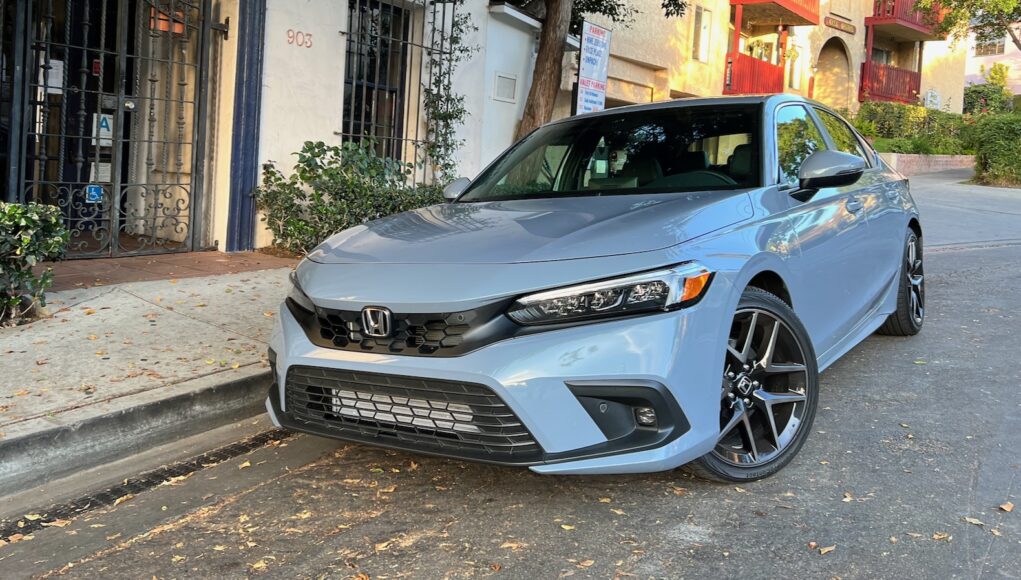 The Honda Civic has been a one of the best compact cars you can buy for years and although the last generation was well received, it’s over the top styling did turn off some buyers. Well Honda fixed that with the recent introduction of the 2022 Civic sedan, which looks and feels like a baby Accord – that’s a good thing. Now we have the introduction of the new hatchback, which is positioned as a sportier and more versatile alternative to the sedan. In short, you won’t be able to find a better all around small hatchback.

The entire Civic lineup has grown up for the 2022 model year. It now looks more conservative, but also more sophisticated than the last generation. From the B pillar forward, the Civic hatchback is nearly identical to the sedan, although it gets a unique grille. At the rear the roofline has a nice look at the flows into the rear. At the rear it’s less crazy than before, but also sportier than the sedan. All of the extra cladding, fake air scoops and the rear wing have been deleted to give it a cleaner look.

Compared to the 10th generation Civic hatchback, the new one has a 1.4-inch longer wheelbase at 107.7-inches, making it the longest in its class, which improves the rear legroom. That long wheelbase gives the hatch a more spacious interior than its Mazda3 or Toyota Corolla hatchback rivals. The track width has increased by 0.5-inches. Honda also swapped out rear hatch with a piece that is made out of a resin material, instead of aluminum or steel, which is lighter. The hatch also has a larger opening than before. There’s 24.5 cubic feet of cargo space with the rear seats up.

While we do welcome the more grown up styling, we’re even more impressed with the upgraded interior. The entire 2022 Civic lineup has a new, upgraded interior with a minimalistic design that’s inspired by Hondas from the past. The horizontal dashboard is clean and the air vents are now hidden behind a mesh pattern. The materials have also been upgraded to give it almost a luxury feel.

Honda also upgraded the tech with a standard 7-inch touchscreen and a 7-inch digital gauge cluster. Higher trim models get a 9-inch infotainment system and a 10.2-inch gauge cluster. Apple CarPlay and Android Auto are standard, while the Sport Touring model connects wirelessly to either option. The top trim also has wireless charging.

The infotainment system is an improvement over the last system, but it’s not hugely different. If you’ve driven the Accord, you’ll see the similarities. The system reacts fast, but it doesn’t look or feel years ahead of the last one. The graphics could look better.

Under the hood there are two engines to choose from. The LX and Sport models are powered by a 2.0-liter four-cylinder engine with 158 horsepower and 138 pound-feet of torque. If you want to have more fun, the EX-L and Sport Touring models are powered by a 1.5-liter turbo with 180 hp and 177 lb-ft. The LX and EX-L models come standard with a continuously variable transmission, but the good news is that both the Sport and Sport Touring are available with either a six-speed manual or a CVT.

The CVT is better than your typical CVT. It reacts fast and doesn’t have the annoying drone that some CVTs have when pushed hard. It’s unobtrusive and a good match to either engine. But what excites us more is the available six-speed manual, which makes the Civic hatch more fun to drive. The manual has short throws and is easy to put it through the gears. If you want a more engaging driving experience you’ll want to get the manual.

While the engines carry over from the previous generation, Honda did make a lot of other changes under the skin to make it more fun to drive. There’s a new steering rack, a new front suspension, stiffer springs, upgraded stabilizer bars and new dampers. The 2022 Civic hatchback now feels more planted to the road with less body roll. In the past we’ve said the Mazda3 handles better than the Civic, but that’s no longer the case. The steering is perfectly weighted with good feedback and the firm ride isn’t punishing.

At the end of the day, the Civic hatchback would be our choice if we had to choose between the sedan and hatchback versions. The hatch looks sportier, it’s available with a six-speed manual and it’s more versatile. Good luck trying to find a better small car. Now we just have to wait for the next Civic Type R.