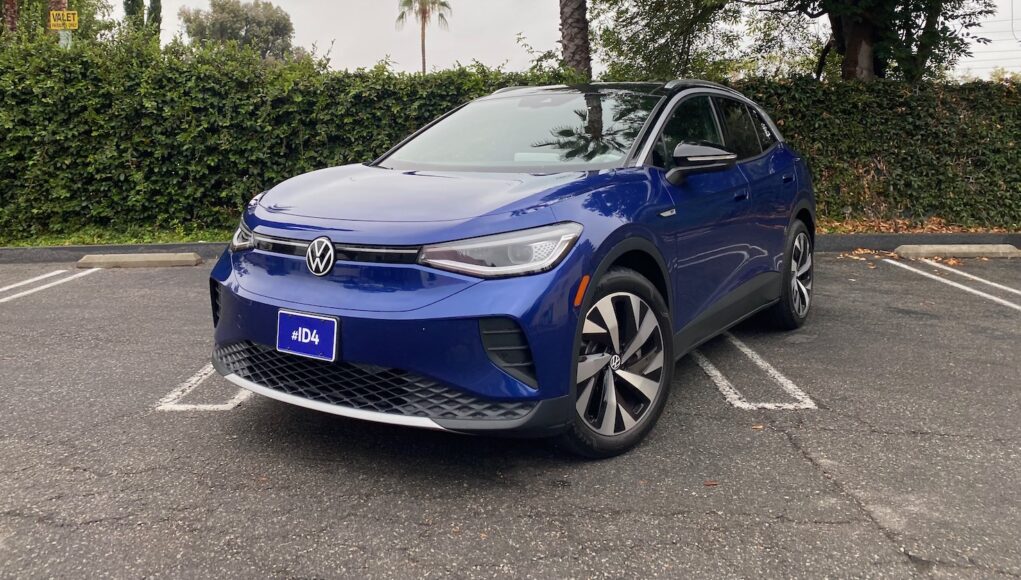 Volkswagen is just getting started with its goal to take on Tesla. VW recently introduced the first of its new EVs, the ID.3 hatchback in Europe. Sadly it isn’t coming here, but it’s second model, the ID.4 SUV is ready to take on the growing number of electric SUVs in the U.S. The ID.4 is an electric SUV that is aimed at the masses with its 250 mile range and easy to swallow $40k starting price.

The ID.4 is the second fully electric model that VW has offered in the US, following the e-Golf, which has been discontinued. Compared to the old e-Golf, the ID.4 will easily appeal to more buyers. Why? Simply because SUVs are all that buyers want on these shores. The ID.4 already has a long list of rivals, including the Ford Mustang Mach-E, Hyundai Kona Electric, and the Hyundai Ioniq 5. Soon it will also go head to head with the upcoming Toyota bZ4X and Subaru Solterra.

The ID.4 will also likely steal some buyers with internal combustion engine, like the Toyota RAV4 and Honda CR-V.

On the outside the ID.4 is a stylish compact crossover with some modern design touches, like its LED headlights and grille-less face. Overall the styling of the ID.4 has a more rounded shaped than the other boxier SUVs in VW’s lineup. The only thing we wish the ID.4 had is the frunk (front trunk) like other EVs.

Inside the ID.4’s interior is packed with tech features, which gives it a futuristic look. There aren’t the traditional knobs and buttons and instead there are capacitive touch switches. Behind the steering wheel there’s a digital instrument cluster, which reminds us of the old BMW i3. It even has a similar knob that’s used as the gear selector. You simply twist the gear selector one direction for drive and the other for reverse. To put it in park, you just need to push a button at the end of the selector.

The capacitive touch switches do look modern, but sadly they aren’t as easy to use as simple buttons and knobs. We also don’t understand why VW decided to only put two window switches on the driver’s side door. That means that if you want to lower or raise the rear windows, you have to first hit a separate button and then press one of the switches. It’s a bit frustrating to use.

Buyers have two options for the center touchscreen, which is available in either 10- or 12-inch sizes. The graphics look modern, but operating the system can be a bit cumbersome. It’s difficult to do simple things, like changing the radio station.

The ID.4 has a small footprint, since it’s shorter than the Honda CR-V or Toyota RAV4, but that doesn’t mean that interior space is an issue. The ID.4 has a long wheelbase, which gives it a lot of legroom in the back. Any friends that are over 6-feet tall will easily fit in the ID.4. But that shorter overall length does hurt the cargo space a bit, with 30.3 cubic feet of space behind the rear seats and 64.2 cubic feet with the rear seats folded. Both the CR-V and RAV4 have more cargo space than the ID.4.

There are two powertrains to choose from, either a single motor version or a dual motor version that gives it all-wheel drive. The rear-wheel drive ID.4 has 201 horsepower and 229 pound-feet of torque. The base Pro version has 260 miles of range, while the Pro S has a 250 mile range.

The ID.4 AWD has 295 horsepower and even with the second electric motor, the range doesn’t take a big hit. The AWD Pro has a 249 mile range, while the AWS Pro S can travel up to 240 miles on a single charge.

Recharging the ID.4 using a Level 2 charge will take about 7.5 hours, while a DC fast charger (125-kW) can charge the battery from 5% to 80% in about 40 minutes. That’s a bit slower than the Hyundai Ioniq 5, which can be charged from 10% to 80% in only 18 minutes. To make it easy to charge, VW is throwing in three years of free charging at Electrify America stations.

If a high performance EV is something you’re looking for, the ID.4 isn’t for you. Instead the ID.4’s performance is on par with other compact SUVs. Around town the ID.4 feels zippy with its smooth power delivery, making it feel a bit more lively than the CR-V or RAV4. Push it hard and the ID.4 simply feels adequate. Hopefully VW will introduce a sportier version in the US.

On the road, the ID.4 has a firm ride and thanks to its low center of gravity, the ID.4 is fun to drive on a curvy back road. That firm ride does let some of the road’s imperfections ruin the overall experience and we did notice a bit more road noise than we expected. Lastly we really wish the ID.4 had a heavier regenerative braking mode to give it the one-pedal driving feature that some other EVs offer.

At the end of the day, it’s pretty clear that Volkswagen is going after mainstream EV buyers with the 2021 ID.4 electric SUV. Its stylish exterior stands out in the brand’s lineup, plus it has a spacious interior and up to 260 miles of range.