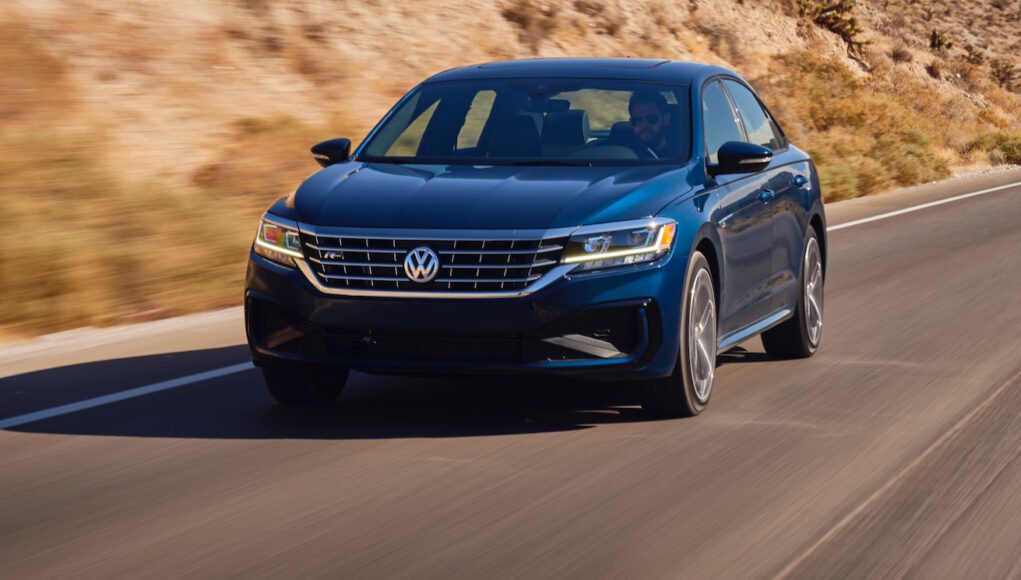 It’s no secret that the sedan segment is continuing to shrink due to the growing popularity of crossovers and SUVs. While the segment has seen its market share dwindle over the past few years, there are still some good options, like the Honda Accord and Toyota Camry. But what about the VW Passat? The current generation was designed for American tastes with its big spacious interior.

The 2021 VW Passat is a classic example of a midsize sedan that seeks to provide a big comfortable interior, reasonable gas mileage and a slightly stylish exterior. The Passat looks more like a traditional sedan than the sleeker Accord and Camry. While the Camry and even the Sonata feature somewhat polarizing designs, the Passat tries harder to not offend. But that non-offensive styling also works against it, since the Passat doesn’t really stand out compared to its rivals.

Inside there’s a lot more space than you would probably expect, since the Passat’s cabin is one of the most spacious in its class. There’s 39.1 inches of legroom and 37.8 inches of headroom in the back seats. You can easily fit three passengers in the rear seat as well. Everything is laid out well in the front, since the dashboard isn’t overly styled, but while it’s easy to adjust the climate control settings or change the audio, the interior feels a bit dated.

The Passat comes with a small 6.3-inch touchscreen infotainment system, which is tiny compared to its rivals that feature 8- or even 10-inch screens. The infotainment system does come with Apple CarPlay and Android Auto compatibility. In front of the driver, there’s traditional analog gauges, since the Passat doesn’t come with the digital cockpit that you can get in the Atlas or Jetta. Instead there’s small digital display between the gauges, which isn’t different than VW models from over a decade ago.

We also aren’t too keen on the materials used, since there is way too much hard, cheap feeling plastic throughout the interior. VW interiors used to feel a class above the rest, but the Passat’s feels the opposite.

The Passat is only available with one engine, a 2.0-liter turbocharged four-cylinder engine with 174 horsepower and 206 pound-feet of torque. The four-cylinder is mated to a six-speed automatic transmission. Around town the Passat’s engine packs enough power to get you moving down the road, but it’s not nearly as sporty as the optional engines you can get with the Accord or Camry.

The Passat is rated at 24 mpg city, 36 mpg highway and 28 mpg combined. Those specs fall short of what you get with the base engines in the Accord and Camry, which get 33 mpg and 32 mpg combined, respectively.

On the road the Passat places more of an emphasis on comfort than sport with its suspension that feels a bit floaty and its steering that is a bit too light. The suspension is also easily disturbed if you hit a bump in the road. The Passat is easy to drive midsize sedan, but if sporty is something you want, you’ll want to look elsewhere.

The 2021 Passat is offered in three trim levels: S, SE and R-Line. The pricing starts at $24,990, including destination.

If you’re in the market for a midsize sedan that has a spacious interior and easy to swallow starting price, the Passat is a great choice. But if you are interested in it, you have to act fast, since VW has confirmed that 2022 will be the Passat’s last year in the U.S.