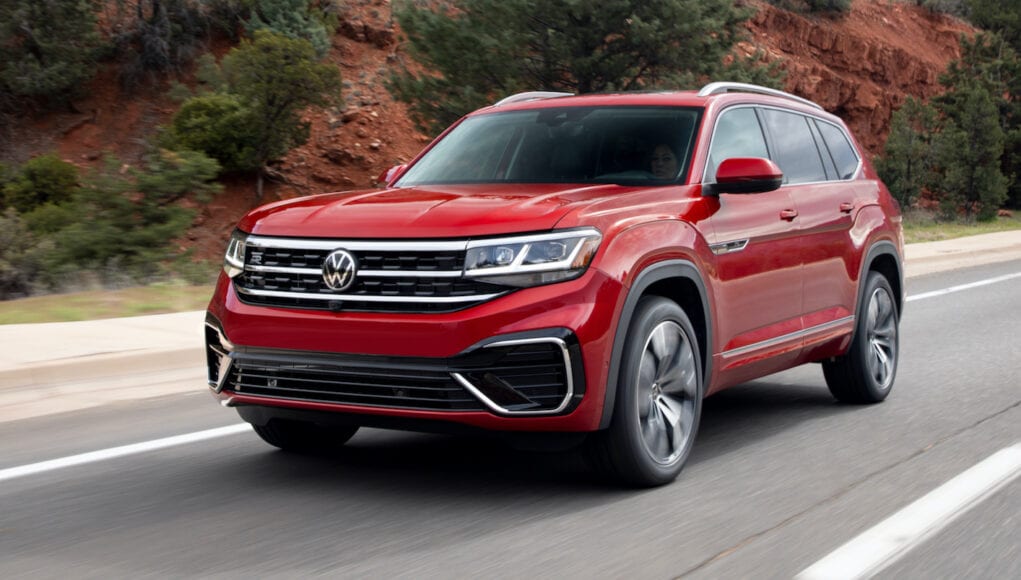 The three-row crossover segment is one of the most competitive segments, with nearly every automaker vying for your family’s attention. For a crossover to be able to succeed in this segment it has to be able to hold all your family’s gear, be able to fit at least seven people comfortably and also it doesn’t hurt if there’s a bit of style thrown in. Volkswagen knows this all too well, which is why it’s given the 2021 Atlas a refresh for the new model year.

When the VW Atlas debuted, it arrived with a blocky face to give it an imposing SUV look, to hide its car based underpinnings. Now VW has decided to soften things a bit with a new face that’s more rounded and pleasing to look at. The Atlas’s new face is similar to the new two-row Atlas Cross Sport and the updated Tiguan. The facelift gives the Atlas a bit more style to help it compete with its top rivals, like the Ford Explorer and Toyota Highlander.

At the rear the updates are smaller, with the biggest changes being a new bumper and restyled taillights.

VW also decided to upgrade the 2021 Atlas’s interior with a new steering wheel, an 8-inch infotainment system that’s standard on all trim levels except the base S. But overall the interior feels pretty much the same, which isn’t a bad thing. The interior isn’t very stylish, and feels less luxurious than the Kia Telluride and Mazda CX-9. There’s still a bit too much hard plastic and other cheap feeling materials. But it does come with the tech features buyers demand, like Apple CarPlay, Android Auto, and satellite radio. A Fender audio system is also available and wireless charging for your cell phone.

The Atlas’s interior is spacious and thankfully the second row seats have can tilt and slide to give more legroom to passengers in the third row. Average sized adults won’t complain too much if they are sitting way in the back, which is better than we can say about a lot of three-row crossovers. There’s also ample space behind the third row. Fold both rows of seats down and the Atlas will be able to swallow a lot of gear. We were able to fit a 75-inch TV with ease. During a 300-mile road trip no one complained about being uncomfortable or cramped.

Under the hood there are two engines to choose from. The standard engine is a 2.0-liter four-cylinder with 235 horsepower, but if you want more power there’s the 3.6-liter V6 with 276 hp. Both engines are mated to an eight-speed automatic transmission and you can choose from front- or all-wheel drive.

Our tester was powered by the V6, which provides an adequate amount of power to get the large Atlas moving down the road. The powertrain isn’t too sporty, but we had no problem getting it up to speed even with the Atlas packed to the gills with an apartment’s worth of knick knacks. The V6 does have some flat spots in its power curve though, which will require you to give it more throttle. The transmission also can be a little slow to downshift, but choose the S position the transmission becomes a bit more lively.

Although the Atlas is built on VW’s MQB platform, which is also the basis for the much loved Golf GTI, the Atlas choose comfort over sport. On the road the Atlas’s suspension is tuned to swallow the road’s imperfections, which means that it feels more like it’s floating down the road. It’s electric steering isn’t too light, which is a good thing.

If you’re in the market for a three-row crossover, you’re likely overwhelmed with the number of choices. Now VW has made it even harder for you to choose with the updated 2021 Atlas, which has prettier face, the same spacious interior and the tech features you demand.