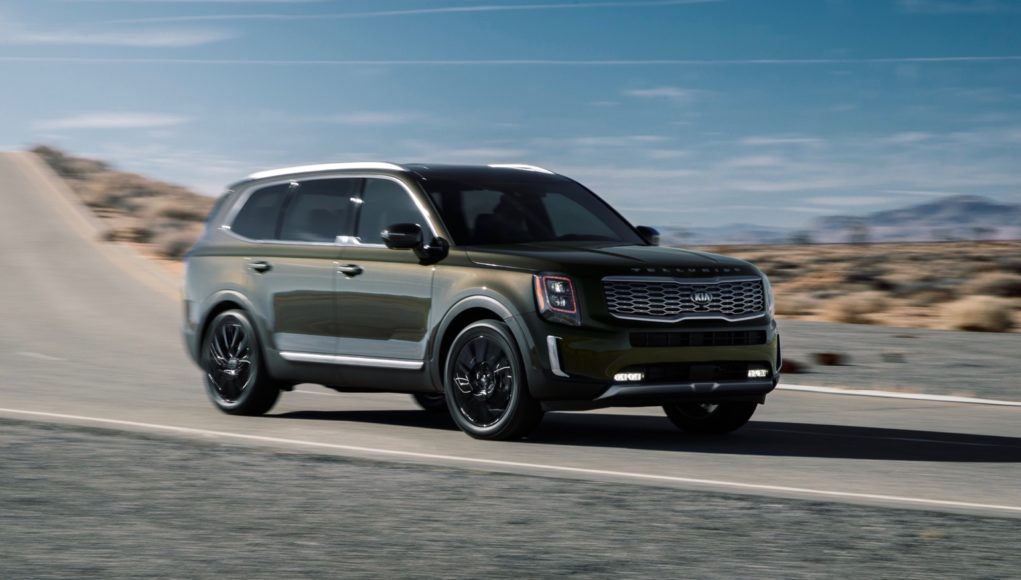 Today three-row SUVs are the vehicle of choice for most families, since everyone loves to hate on the minivan. For years Kia has offered three rows of seats in the Sorento, but the third row has only really been suitable for children. Well Kia knew that it needed something bigger and that’s where the 2020 Telluride comes in. It’s based on the same platform as the Sorento, but the Telluride’s extra length gives it more interior space than you’ll get with the Sorento.

The Telluride is almost eight inches longer than the Sorento, with most of that extra length going between the wheels, giving it more space for those riders that are forced to ride in the third row.. Kia didn’t just make the Telluride bigger than the Sorento, but it’s also bigger than some of its rivals, like the Honda Pilot and Toyota Highlander. That extra space gives you room for up to eight passengers if you choose the second row bench seat or seven if you opt for captain’s chairs.

Under the hood the Telluride is powered by a 3.8L V6 that generates 291 horsepower and 262 lb-ft. of torque, that’s mated to an eight-speed automatic transmission. Front-wheel drive is standard, but all-wheel drive is optional. Although the Telluride does have almost 300 horsepower, we do wish the Telluride was available with the same twin turbocharged 3.3L V6 engine that gives the Stinger so much life.

The front-wheel drive Telluride is rated at 20 mpg in the city and 26 mpg on the highway, while if you opt for all-wheel drive those specs decline slightly to 19/24 mpg.

On the outside the Telluride’s boxy styling gives it a more rugged, adventurous look than the Sorento, but underneath the Telluride is based on a unibody platform, which it also shares with the Hyundai Palisade. So don’t expect it to be able to match the capabilities of more rugged SUVs, like the Toyota 4Runner. Even if the Telluride isn’t able to tackle the dirt roads as well as a 4Runner or Jeep Grand Cherokee, its rugged and boxy styling is a breath of fresh air compared to some other large crossovers that simply look like raised minivans.

Inside the Telluride is available with a long list of luxury features, like Nappa leather seats, dual sunroofs, heated and ventilated second-row seats, a head-up display and a 10.25-inch touchscreen infotainment system with Apple CarPlay and Android Auto. The spacious interior does feel luxurious initially, but upon closer examination you’ll realize that the wood is fake and there’s a bit more hard plastic than we’d like to see. While some materials could be better, the Telluride still manages to ooze a bit more style than you’ll get in the Sorento.

There is still one area where the Telluride can’t beat a minivan, the cargo compartment. While the interior does have enough room for up to eight passengers, you’ll have a hard time carrying luggage for that many people. With the third row seat up, there’s only room for about two carry on suitcases, so you’ll have to pack light.

On the road, the Telluride places a higher emphasis on comfort than sport. The V6 does an adequate job of getting the large SUV down the road, but don’t expect any surprises. It would be nice if the Telluride was offered with the same V6 as the Stinger, since that would also make it a rival to the new Explorer ST. The Telluride’s suspension does a good job of keeping body roll in check, but it’s still tuned pretty soft. Even with its heft, the Telluride never feels too large or heavy. Its steering is on point and the suspension makes it feel more like a car than a big SUV.

With the arrival of the 2020 Telluride, Kia finally has a real three-row SUV that can compete head on with the segment’s heavyweights, like the Ford Explorer, Honda Pilot and Toyota Highlander. Where it ups the ante is in the styling department. The Telluride may be a soft crossover underneath the skin, but its rugged looks give a cool factor that you won’t get with the Pilot or Highlander.