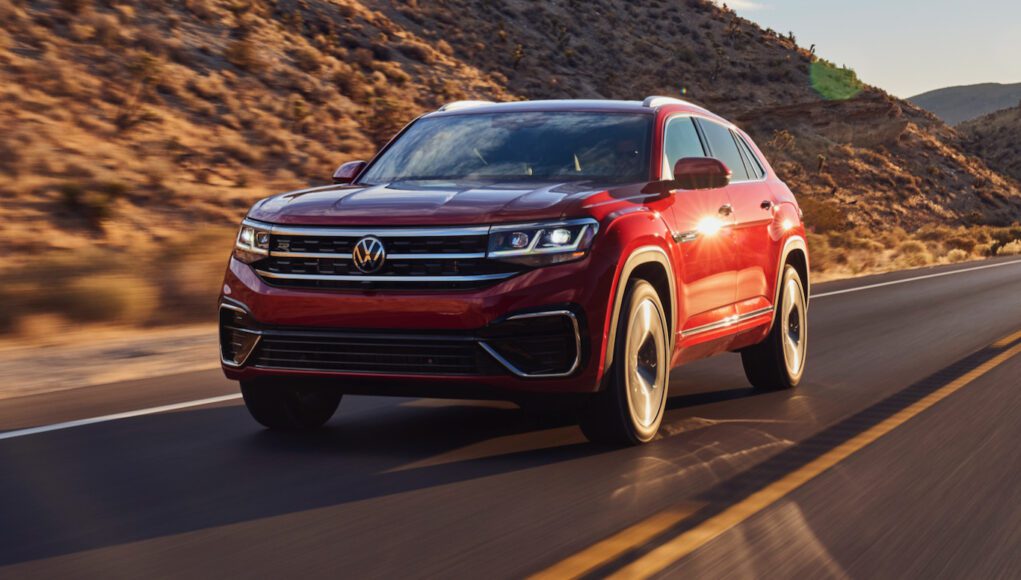 In the last few years Volkswagen has been tweaking its US lineup to appeal more to buyers here than it has in the past. The biggest effort is with its SUV lineup, which includes the three-row family focused Atlas. The Atlas has been a success for the brand and to build on that VW recently added the Atlas Cross Sport to the lineup, which is a smaller five-passenger version of the larger Atlas.

The Atlas Cross Sport succeeds as a crossover coupe, where many others do not. The Atlas Cross Sport starts with the handsome styling of the larger Atlas, but at the rear it gets a more stylish rump. It also looks sporty with its available 20- and 21-inch wheels and styling stand outs, like its flared fenders that give it a more muscular look.

While some crossover coupes take a hit when it comes to passenger room and cargo space, the Atlas Cross Sport is very spacious. There’s 40.4-inches of rear legroom and 37.8-inches of rear headroom. On a long road trip, our friends in the rear were impressed with how much room they had. Behind the rear seat there’s 40.3 cubic feet of cargo space, which increases to 77.8 cubic feet with the rear seats folded. With the rear seat up, the Atlas Cross Sport can hold more of your gear than the Chevy Blazer and Nissan Murano.

The interior does get the latest tech features, like a nice 10.3-inch digital gauge cluster and a standard 6.5-inch touchscreen, while a large 8.0-inch screen is optional. We do wish the Atlas offered the more modern climate control interface that’s offered in other VW models, like the 2022 Tiguan.

The V6-powered Atlas Cross Sport with all-wheel drive is also not very fuel efficient with its 17 mpg city, 23 mpg highway, and 19 mpg combined rating. That’s below its rivals, like the Chevy Blazer, Honda Passport, and Nissan Murano. It can also tow up to 5,000 pounds, which puts in the middle of its rivals.

Check out our full review of the 2021 Atlas Cross Sport here.