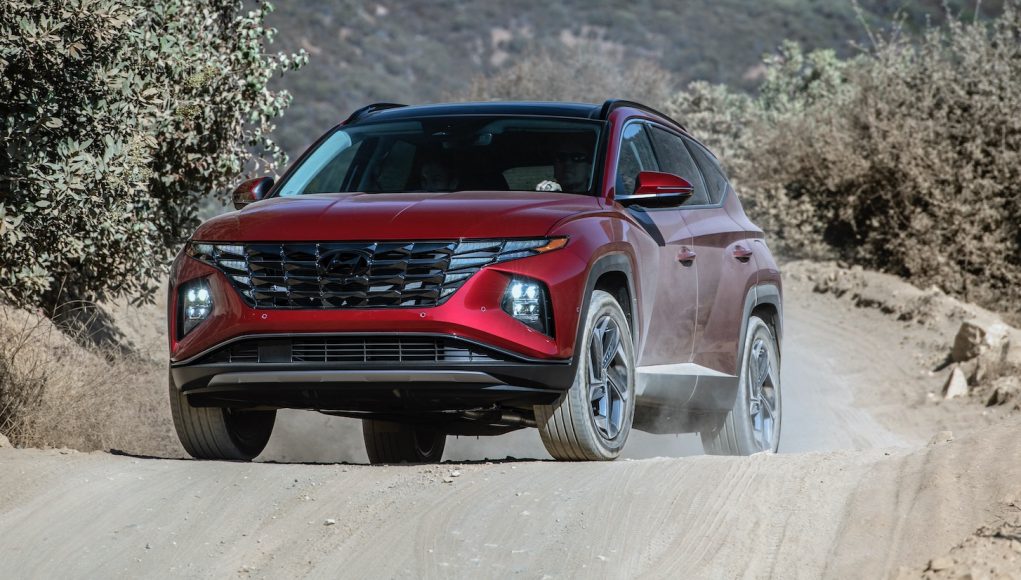 The Hyundai Tucson has been around for years, but it hasn’t garnered as much attention as heavy hitters, like the Honda CR-V and Toyota RAV4, but that’s changed. Hyundai has given the 2022 Tucson a major redo with a big emphasis on style, more than we’ve seen in the past. The new Tucson is finally ready to be noticed.

Hyundai’s latest design language has yielding some bold designs, like the new Elantra and Sonata. The bold “Parametric Dynamic” design language helps Hyundai’s newest models stand out more and that’s the same with the new Tucson. Starting with its face, the Tucson has a big grille with a dark chrome finish that integrates the LED daytime running lights and turn signals. The headlights are placed in the lower bumper, which definitely gives the Tucson a distinctive look at night. Moving past the new face, there are lots of crisp character lines and at the rear the new taillights are connected by a full-width light bar.

Overall the look of the new Tucson will help it stand out from its many rivals with more style than you get with the CR-V or RAV4.

The 2022 Tucson has also grown a bit, since it’s now 6.1-inches longer, 0.6-inches taller and 0.6-inches wider than the last Tucson. 3.4-inches have also been added between the wheels, which gives it 41.3-inches of rear seat legroom. That extra length means that passenger volume and cargo space have also increased, to 108.2 cubic feet and 38.7 cubic feet, respectively. The interior now feels roomy and rear seat passengers will also love the reclining seat backs in addition to the extra legroom.

Inside the Tucson’s interior is a bit more restrained than the exterior, but it feels more luxurious than before with some unique styling details. For example it has thin horizontal air vents that wrap around the dash with the line continuing onto the doors. The base Tucson gets an 8-inch touchscreen, while a 10.3-inch display is offered. In front of the driver the lower trim levels get analog gauges and a 4.2-inch display in between them, but a 10.3-inch digital instrument cluster is optional on the SEL and standard on the Limited version.

The 10.3-inch display looks great and is easy to operate with modern graphics. The only issue is that it’s not available with wireless Apple CarPlay, like the smaller 8-inch screen is. The Limited version also gets a touch-sensitive panel for the audio and climate controls, while lower version get actual buttons and knobs. The buttons are easy to use, but we do wish it had an actual volume knob, which is something that even Honda had to add back in its vehicles.

The Tucson also comes with other great tech features, like the Digital Key, which lets you operate the Tucson via a smartphone app and Remote Park Assist that lets drivers park and and retrieve the Tucson from the outside of the vehicle.

Under the hood the Tucson comes standard with a naturally-aspirated 2.5-liter four-cylinder that’s mated to an eight-speed automatic transmission. The four-cylinder has 187 horsepower and 178 pound-feet of torque, which is slightly less power than you get with the RAV4. Just like before, all-wheel drive is optional.

Around town the engine gets the Tucson moving down the road easily, but we definitely wouldn’t call the Tucson sporty. It’s definitely slower than the turbocharged CR-V and even the non-turbocharged Mazda CX-5. The light steering could also use a bit more feedback and when the road gets twisty, there’s a bit too much body roll. Although we wish the Tucson had sportier driving dynamics, the suspension does a great job of soaking up bumps in the road.

For buyers that want more power and fuel efficiency, there’s the new Tucson hybrid, which is powered by a turbocharged 1.6-liter four-cylinder and an electric motor. The hybrid powertrain generates 261 horsepower, which adds that “sport” that we’re missing from the standard engine. The Tucson hybrid gets 38 mpg city, 38 mpg highway and 38 mpg combined with front-wheel drive. If you want more, there’s also the Tucson Plug-in hybrid, which is powered by the same hybrid powertrain, but thanks to a larger battery, it can travel up to 33 miles in electric mode.

We also have to wait and see if Hyundai is also working on a more powerful Tucson N.

The Tucson is ready to battle the Honda and Toyota with a price that starts at $26,135, which is cheaper than the CR-V and RAV4. The base Tucson SE comes standard with 17-inch wheels, LED headlights, automatic emergency braking, and lane keeping assist. Moving up to the SEL will cost you $27,685 and the fully loaded Limited starts at $35,885. The Limited trim level is the one to get if you can afford it, since it comes standard with a panoramic sunroof, a 360-degree camera, leather seats ventilated front seats, blind spot cameras that show you what’s next to you in the gauge cluster and heated rear seats.

The 2022 Tucson’s new bolder look may not be for everyone, but we have to give Hyundai props for finally making a stylish Tucson. It’s interior also got a major upgrade with a more luxurious feel and great tech features, which makes the new Tucson feel more sophisticated and grown up.