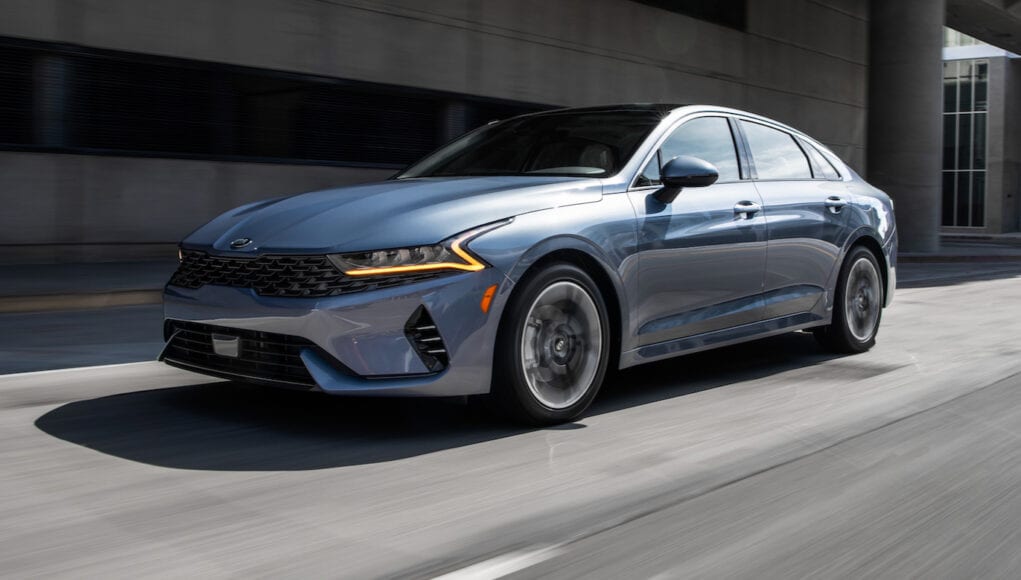 The Kia Optima is out and now you can say hello to the Kia K5. After 20 years in the US, Kia has decided to change the name of its midsize sedan to the generic Kx naming strategy that it uses in South Korea. In its home market, the Forte is called the K3, the Cadenza is called the K7 and the K900 is branded as the K9. But although the name has changed, the Kia K5 continues as one of the more stylish midsize sedans, just like the last two generations of the Optima.

The 2021 K5 is a handsome sedan with unique styling elements, like the amber LED daytime running lights, a full-width light bar at the rear and a new slim version of the brand’s “Tiger Nose” grille. We like the way the K5 looks, since it’s not only stylish but also exudes more class than before. It also looks better than its cousin, the Hyundai Sonata. From the side the K5 also looks like it has a liftback, like the Stinger, which gives it a sleeker look, but instead it has a conventional trunk.

The K5 is offered in five trim levels: LX, LXS, GT-Line, EX and GT. The base LX rides on small 16-inch wheels, while the LXS, GT-Line, EX trim levels get 18-inch wheels and the top spec GT gets nice 19-inch wheels. For buyers that want a sportier look, you’ll want to go for the GT-Line or GT, which get a more aggressive face with a unique grille and larger vents, while the rear gets a small decklid spoile and larger vents.

The K5 LX, LXS, GT-Line and EX models are all powered by a 1.6-liter turbocharged four-cylinder with 180 horsepower and 195 pound-feet of torque that’s mated to an eight-speed automatic transmission. The LXS and GT-Line models can also be equipped with all-wheel drive, which will rival the AWD versions of the Nissan Altima, Subaru Legacy and Toyota Camry.

The 1.6-liter packs enough power to zoom around town with ease, but we wouldn’t call the engine very sporty. The transmission also does a good job of being in the appropriate gear and thanks to the fact that all the torque is delivered starting at a low 1,500 rpm, the transmission doesn’t have to be too aggressive when passing.

For buyers that want more power, there’s the GT with its turbocharged 2.5-liter four-cylinder with 290 hp and 311 lb-ft. of torque that’s mated to an eight-speed dual clutch automatic. It’s rated at 24 mpg city, 32 mpg highway and 27 mpg combined.

Around town the K5 is a solid midsize sedan that places greater emphasis on comfort than sport. Its steering is a bit too light, but it can be tightened up a bit in the Sport mode. The suspension also does a good job of keeping the bumps on the road from ruining your morning commute and when you come around a corner there’s very little body roll. Overall the K5’s driving dynamics feel more refined than the Camry, but it’s not as fun to drive as the Honda Accord or Mazda6.

Inside the stylish interior could easily be mistaken for a luxury car. It looks modern with its available larger 10.2-inch touchscreen (an 8-inch touchscreen is standard). The materials look great and the switchgear is similar to the much loved Stinger. What is interesting though is the fact that it has a traditional PRNDL shifter instead of the electronic gear selector dial in the Korean-spec K5. The Sonata also has a similar system, so we’re not sure why Kia decided to go with the old school shifter in the US-spec K5.

Space in the front is great with lots of headroom, but the sloping roofline does eat some of the rear headroom a bit. In the rear the space is a bit tighter than its rivals. The K5 has 35.2-inches of rear legroom compared to 40.4 in the Accord and 38.0 in the Camry.

One odd issue is that the larger 10.2-inch screen isn’t available with wireless Apple CarPlay and Android Auto, but the base 8-inch screen is. Either way the infotainment screen is responsive and easy to use. There’s also an optional wireless charging pad that’s located in a vertical slot that keeps your phone more secure than in similar horizontal systems.

On the safety front, the K5 comes standard with automatic emergency braking, lane keeping assist and automatic high beams. The LXS gets blind-spot monitoring and rear cross-traffic alert. The GT-Line and EX get adaptive cruise control as part of the Premium Package.

The 2021 Kia K5 is a great, stylish midsize sedan that feels like a luxury sedan. It now stands out more than ever at a time when it needs to, since buyers are choosing crossovers instead of sedans. At the end of the day, the K5 is a sleek sedan that brings a new level of luxury and style to the crowded segment.