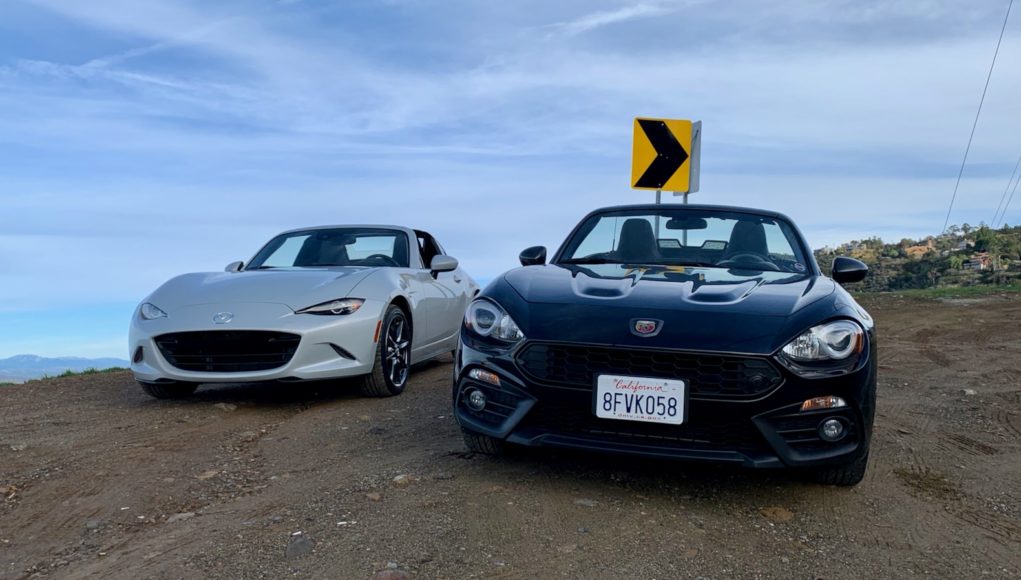 The Fiat 124 Spider and Mazda MX-5 Miata may have different badges on the hood, but these two fraternal twins are two of the best bargains on the market if you are in the market for a fun, attainable roadster that’s easy on the wallet. But which one is better? The Fiat 124 Spider is the meaner looking of the two, while the MX-5 Miata has a more classic, understated look.

Although their exteriors do look quite different, there are quite a lot of similarities between the two. They both ride on the same 90.9-inch wheelbase and have the same control-arm front and multilink rear suspension, but they both have different springs, dampers and anti-roll bars. On the outside, the Fiat 124 Spider is 5.5-inches longer than the MX-5 Miata and it takes design cues from the original 124 Spider, like its headlights, grille and side character line.

Under the hood there are bigger differences between the two. The 2019 MX-5 Miata is now powered by a naturally-aspirated 2.0L four-cylinder that generates 181 horsepower and 151 lb-ft. of torque. That’s an improvement of 26 horsepower and 3 lb-ft. compared to last year’s model. The Fiat 124 Spider Abarth is powered by a turbocharged 1.4L four-cylinder with 164 horsepower and 184 lb-ft., while the non-Abarth version generates 160 horsepower. Both models send the power to the rear wheels via either a six-speed manual or six-speed automatic transmission.

Inside the MX-5 Miata and 124 Spider have nearly identical interiors. Besides the different badges, if you look closely you’ll notice different gauges and door panels. The 124 Spider also has thicker rear glass, an acoustic windshield and more sound deadening material. That extra material gives the 124 Spider a quieter interior than the MX-5 Miata, but at the expensive of a few extra pounds to lug around.

Styling differences aside, to really determine which one is better we took the twins up Pacific Coast Highway to Malibu Canyon to see how well the two performed. The latest MX-5 Miata is as pure as they come. The small roadster may not sound too impressive on paper with only 181 horsepower on tap, but thanks to its 2,339 pound curb weight and 53/47 weight distribution, the MX-5 Miata is a joy to fling around the corners. You feel so connected to the MX-5 Miata.

Since Fiat started with the same platform as the MX-5 Miata, the question is if Fiat was able to improve and essentially make a better Miata with the 124 Spider. The biggest difference is the turbocharged engine, which generates less horsepower than the Mazda, but also 33 more lb-ft. of torque. Comparing the two, you will notice the extra torque under the hood of the 124 Spider, but it also has a lot of turbo lag. Below 2,500 rpm the 124 Spider’s 1.4L engine is only partially awake. On the other hand the MX-5 Miata’s acceleration is more linear thanks to the power upgrades this year.

Running through the gears in either model is a joy, but the MX-5 Miata’s six-speed transmission feels a bit more refined. The 124 Spider Abarth’s quad tailpipes do add a nice bite to its soundtrack.

In the canyon’s we noticed that the 124 Spider’s suspension does have a bit less body roll than the MX-5 Miata, while its extra length and weight make it feel a little less playful. The MX-5 Miata’s engine is more responsive, since it doesn’t have to deal with any turbo lag. Mash the pedal to the floor and the MX-5 Miata just goes. Running the MX-5 Miata through its six gears is also easier.