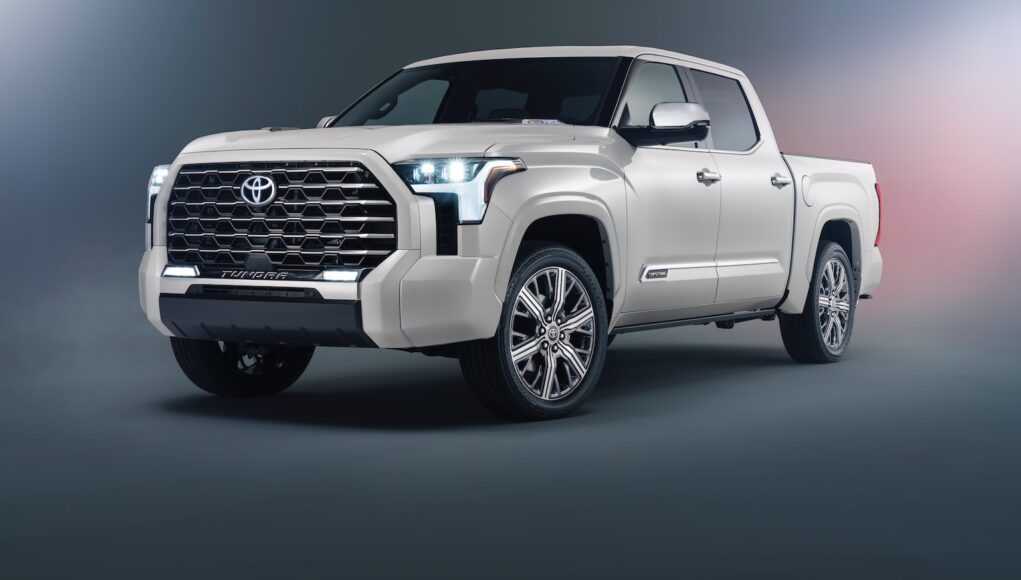 Full size pickups continue to get more and more luxurious, bringing in even bigger revenue for automakers. Toyota knows this and has unveiled the 2022 Tundra Capstone, which will be the most luxurious version of the Tundra when it arrives this spring.

The Tundra Capstone serves as the flagship in the Tundra lineup with several special touches. At the front there’s a unique grille and the exterior gets plenty of chrome, like its chrome mirror caps and chrome “TUNDRA” tailgate inserts. The Capstone also gets unique 22-inch chrome wheels.

Inside there are semi-aniline leather seats with a unique black and white color combination. The center console and passenger side dash get Dark Walnut American with an open-pore finish and a Capstone logo on the dash that illuminates when the doors are opened. To provide an even quieter interior the Capstone gets acoustic glass on the front doors. A panoramic sunroof is also standard.

The Capstone is also packed with the top tech features, including a 10-inch color head-up display and a 14-inch touchscreen infotainment system.

The Tundra Capstone will only be offered in the CrewMax body style with a 5.5 foot bed. Under the hood it’s powered by the i-Force Max hybrid powertrain with 437 horsepower and 585 pound-feet of torque.

Toyota hasn’t announced the pricing for the Tundra Capstone, but it will obviously be priced higher than the 1794 version, which starts at $59,385.