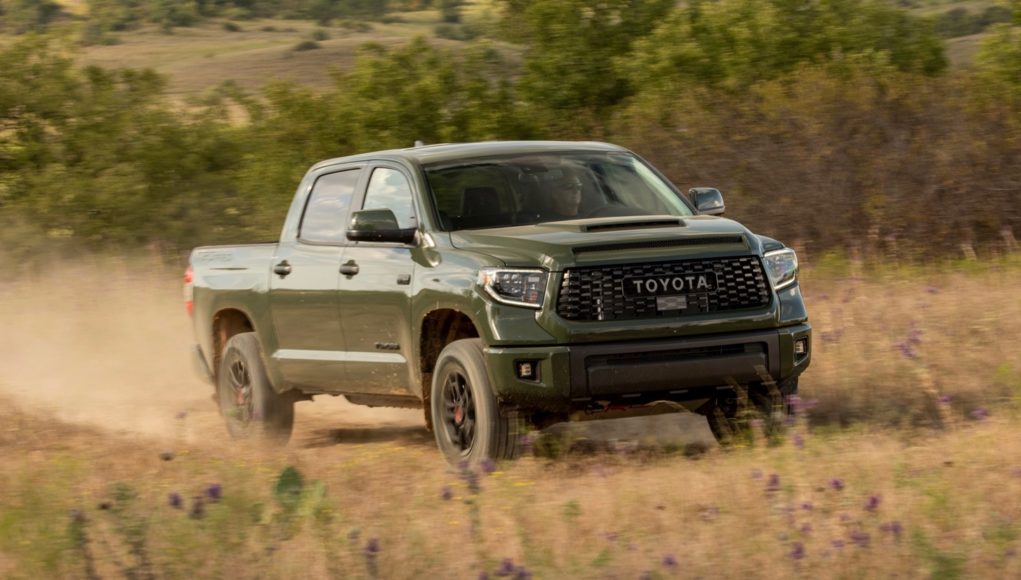 The full size truck segment has been dominated for years by the big three, but that doesn’t mean that there aren’t some good alternatives out there if you don’t feel like getting wrapped up in the Chevy vs. Ford vs. Ram tired fight. It’s been 20 years since Toyota introduced the Tundra and although many truck buyers may forget that Toyota offers a bigger truck than the popular Tacoma, the Tundra has managed to build a strong following over the years.

The current Tundra is easily the oldest truck in the full size segment, since the last time we saw an all-new Tundra debut was back in 2006, with the arrival of the 2007 Tundra. Since then Toyota has given its full size pickup a few styling changes and updated tech features, but it given the fact that we’re now 14 years since the latest Tundra debuted, we’re wondering how much longer we have to go until the next-generation Tundra will arrive. There are rumors that a new Tundra is coming as early as the 2021 model year, but Toyota has yet to confirm anything.

In the meantime, should truck buyers even bother checking out the 2020 Tundra? Yes, while the does feel a bit dated, especially when you check out the interior, it’s still a capable full size pickup. The 2020 Tundra is offered in several trim levels: SR, SR5, Limited, TRD Pro, Platinum, and 1794 Edition.

All trim levels are powered by the same 5.7-liter V8 which generates 381 horsepower and 401 lb-ft. of torque, that’s mated to a six-speed automatic transmission. Those specs compare pretty closely to the 5.0-liter V8 you can get in the Ford F-150, at 395-hp and 400 lb-ft. But the F-150 sends its power to the wheels via a more modern 10-speed automatic. Ford also offers buyers a lot more engine options in the F-150, since buyers can also choose from a range of turbocharged V6 engines and even a diesel.

While its American rivals offer more powertrain options than the Tundra, the Tundra lines up closest to the Nissan Titan, which also only offers one engine, a 5.6-liter V8. The Tundra does offer more towing capacity than the Titan at 10,100 pounds compared to 9,370 pounds.

On the road the 5.7-liter V8 packs a good punch and its six-speed automatic shifts smoothly and always managed to keep the engine in its power band to make moving down the road effortless. Push it hard and you’re greeted with a nice growl from the exhaust. There’s one obvious disadvantage to the six-speed automatic, the Tundra’s powertrain is thirsty. The two-wheel drive versions are rated at 13 mpg in the city and 18 mpg on the highway, while the four-wheel drive versions are less fuel efficient at 13/17 mpg.

If going off-road or at least looking like you like to go off-road is something you love, then you’ll want to check the box for the Tundra TRD Pro, which adds fun things like Fox shocks, off-road hungry tires, and a dual exhaust. The 2020 Tundra TRD Pro also looks cool in its exclusive Army Green color.

Inside the Tundra’s interior is huge with ample room and buyers can choose either the Double Cab or Crew Max body styles. The Crew Max offers the most room, especially for rear seat passengers. For the 2020 model year, the Tundra’s interior has been upgraded with some new tech features, like Apple CarPlay, Android Auto and Amazon Alexa connectivity. While we welcome the updated infotainment system, the rest of the Tundra’s interior feels a bit dated with hard materials.

On the safety front, the 2020 Tundra comes standard with the latest driver assistance features, like adaptive cruise control, automatic emergency braking and lane departure warning. The IIHS hasn’t been too kind to the Tundra, since it’s rated at “Marginal” and “Poor” in the in the driver- and passenger-side small-overlap tests.

Since the current generation Tundra has been around for over a decade, it’s no surprise that it comes up a bit short compared to its Big Three rivals. The Tundra only offers one engine and its interior is dated. But even if it could use some serious updates, the Tundra is a tried and true full size pickup that’s not going to let you down. The pricing for the 2020 Tundra starts at $33,575 and goes all the way up to $48,775 for the Platinum and 1794 Edition trim levels.