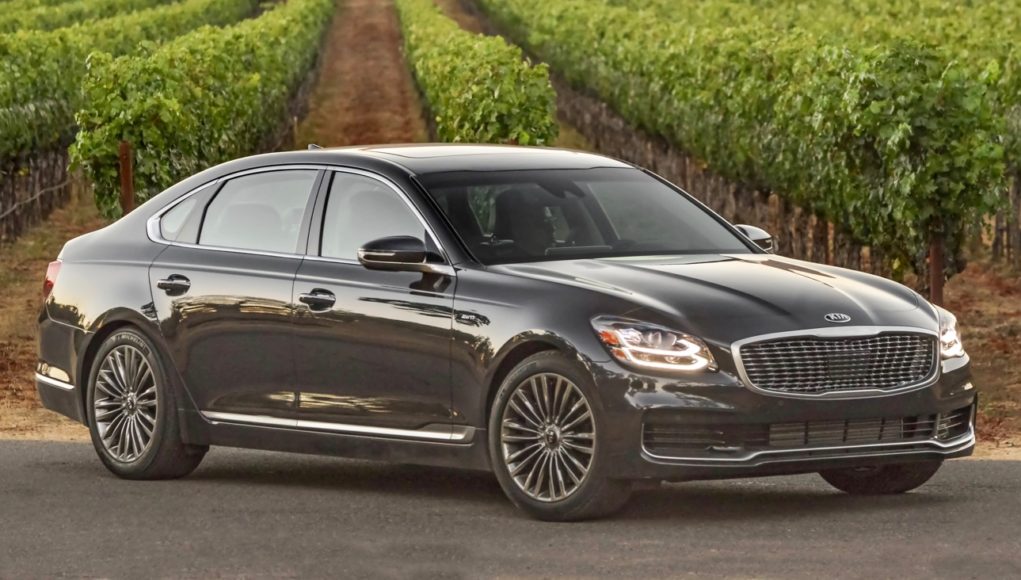 Want a full-size luxury sedan without the full-size luxury sedan price? Well you might not know it, but Kia makes the K900, which is a rival to other luxury sedans, like the Cadillac CT6, Lincoln Continental and Volvo S60. The 2019 Kia K900 has been fully redesigned and it’s easily better in almost every way than its predecessor. But will anyone notice?

The 2019 Kia K900 introduces the second-generation of Kia’s flagship sedan. Besides the redesigned exterior, the K900 is now powered by the same excellent twin-turbocharged V6 as the fun Stinger and only comes with all-wheel drive. the 2019 K900 is also a bit larger than before, while Kia has also amped up the luxuriousness inside.

The last generation K900 was a wallflower with its styling that you’d easily forget. The 2019 K900 isn’t exactly exciting to look at, but it is a little less bland than before. We do wish that Kia took a little risks with the K900 to help it stand out more, but at least now it has a more sophisticated, classic look than before.

Inside the K900’s interior is big and comfortable. The interior is wrapped in a combination of higher quality materials, like wood, leather and metal. The overall styling of the 2019 K900’s interior isn’t entirely ground breaking, but it is all about comfort. The front seats are uber comfortable with their multiple adjustments and even the rear seats can be adjusted.

At the front, the K900’s dashboard is dominated by a large 12.3-inch touchscreen infotainment system. The touchscreen is so large that it can be divided into three areas to display as much info as possible. There’s also a head-up display and the digital gauge cluster also shows displays what’s going on, on each side of the sedan when you turn on the blinker to switch lanes. The system is pretty useful and since it’s directly in front of the driver, it’s easier to use than Honda’s similar LaneWatch system.

Under the hood there’s only one engine available, the 3.3L V6 that also powers the Stinger GT. The engine generates 365 horsepower and 376 lb-ft. of torque in the K900 and is mated to an eight-speed automatic transmission. The power is routed to all four wheels via the standard all-wheel drive system. With 365 horsepower on tap, the K900 comes up a bit short compared to the performance versions of its rivals, like the Continental, which is available with a twin-turbocharged V6 with 400 horsepower. The Genesis G90 is also available with a 5.0L V8 with 420 horsepower.

Even if the K900’s horsepower rating is a bit lower than its rivals, the twin-turbocharged V6 is quite powerful, making it a bit more exciting to drive than the last-generation K900. You’ll easily zoom past the legal speed limits in the K900 in a matter of seconds, while the eight-speed automatic transmission does a great job of always picking the right gear. The K900 is rated at 18 mpg in the city and 25 mpg on the highway.

Drivers can choose from several driving modes: Comfort, Eco, Sport, Custom and Smart. The Sport mode tightens things up a bit, like the suspension, steering and throttle response. Although the K900 does share its platform with the excellent Stinger, the K900 is designed more as a large luxury cruiser, than a sport sedan. The K900 isn’t at home carving up a back country road, like the Stinger, but that’s ok because in everyday driving the K900 stands out as a comfortable, large luxury sedan.

While the 2019 Kia K900 is a big improvement over its predecessor, it remains to be seen how many people will actually notice. Last year Kia only sold 354 units, which was down from 455 in 2017. Either way, the new K900 proves that Kia can build a world class luxury sedan at an attainable price (it starts at $59,900).

January 16, 2020
The 2020 Acura MDX three-row crossover makes all the right moves for family buyers. It's spacious for up to seven, with handsome lines...