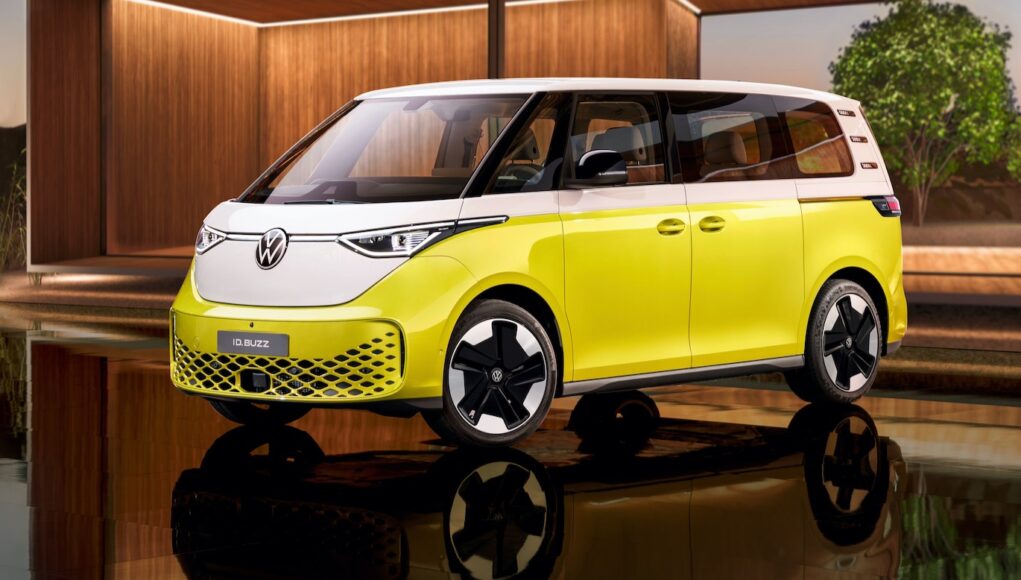 Back in 2017, Volkswagen unveiled the ID. Buzz concept, a futuristic electric van that was inspired by the original microbus. Now the production version is here. VW has unveiled the ID. Buzz, which will be sold in two versions: ID. Buzz and ID. Buzz cargo. The versions you see here are what will go on sale in Europe later this year. The US version will have a long wheelbase that is going to debut in 2023 and go on sale in 2024.

On the outside the ID. Buzz straddles the line between being retro and futuristic. There are retro design details, like its huge badges, two-tone paint options and the rear pillar is inspired by the air intake vents from the Type 2.

Inside the minimalistic interior is similar to the ID.4 SUV. It features two-tone color options with matching inserts in the doors that align it with the exterior color. There’s also an optional panoramic sunroof to give it an airy feel. A 10-inch infotainment screen is standard, while a larger 12-inch screen is optional. There are also optional massaging front seats and as a nod to sustainability, the seats are wrapped in a non-leather material and there are plenty of recycled materials in the interior.

The ID. Buzz is based on the MEB platform, which is also used by the ID.4. When it launches it will be offered in a single-motor version with 201 horsepower and 229 pound-feet of torque. The single motor powers the rear wheels and is mated to a 84-kWh battery. We don’t have its official specs yet, but it’s expected that the driving range will be in the 250-260 mile range. A dual-motor version is expected.

Now we just have to wait to see the long-wheel base version, which we will get to see next year.