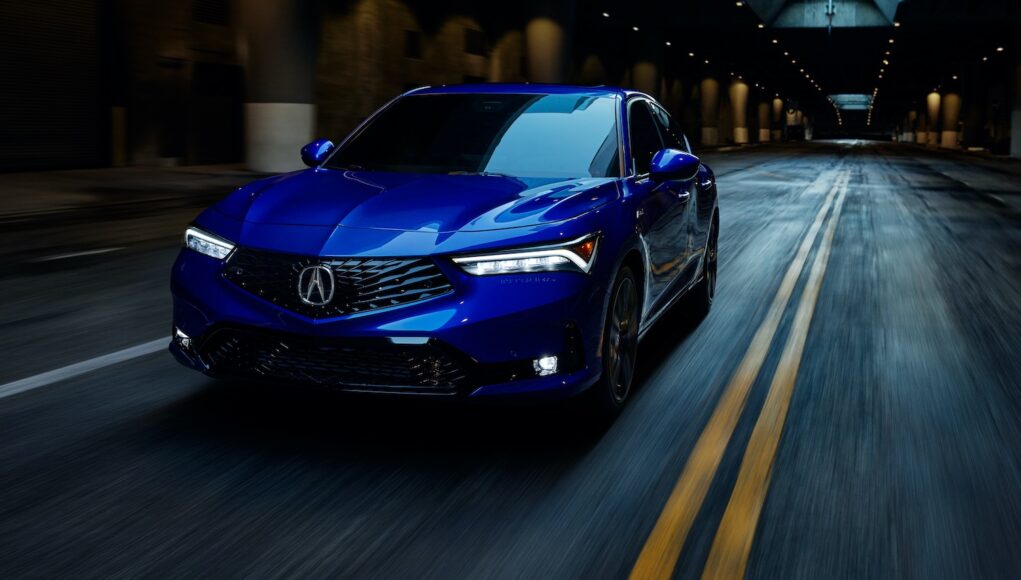 The Acura Integra is officially back! Acura has unveiled the 2023 Integra, which is slated to arrive at dealers this spring. Acura previewed the new Integra as a prototype late last year and as expected, the production version is nearly identical. The only differences are some trim updates and different wheels.

The 2023 Integra arrives as a five-door hatchback, just like the original Integra back in the 1980’s. It has a sleek exterior with a coupe-like roofline that gives it a sportier look than the outgoing ILX. Just like every Integra before it, the 2023 Integra is based on the same platform as the Honda Civic. The good news is that the two do not share any sheetmetal.

Under the hood there’s only one engine option, the same 1.5-liter turbocharged four-cylinder as the Civic Si. It generates 200 horsepower and 192 pound-feet of torque, which is the same as the Civic Si. While the Civic Si is only available with a six-speed manual, the Integra can be equipped with either the manual transmission or a CVT. The CVT also comes standard with steering wheel-mounted shifter paddles and the six-speed manual also gets a helical limited-slip differential.

For buyers that were hoping for more power under the hood, you’ll want to wait for the Integra Type S, which might get the same 2.0-liter four-cylinder as the Civic Type R.

Although they share the same powertrains, we’ll have to wait and see if the Integra drives better than the Civic Si. Acura says that the Integra is stiffer than the Civic Si and it also different suspension tuning. Speaking of the suspension, there’s an available Adaptive Damper System, which alters the suspension depending on which drive mode you select (Comfort, Normal, or Sport). The different modes also adjust the steering and engine response.

Inside the Integra has a more luxurious interior than you get with the Civic, but there are some things that are similar. For example the available 9-inch display looks just like the one in the Civic, but Acura updated the interface to make it more in line with the rest of the Acura lineup. The standard 10.2-inch digital cluster also looks familiar, but it does get some different graphics to help it stand out. If you opt for the Technology Package the infotainment system gets a larger screen (7- vs 9-inch), wireless Apple CarPlay and Android Auto, Alexa integration, wireless charging and a 5.3-inch head-up display. There’s also an optional 16-speaker ELS Studio 3D audio system.

Acura has not announced the pricing for the 2023 Integra other than stating that it will start around $30,000. Acura is taking reservations now for the Integra and the first 500 customers to reserve the 2023 Integra will have the opportunity to claim a limited edition NFT.