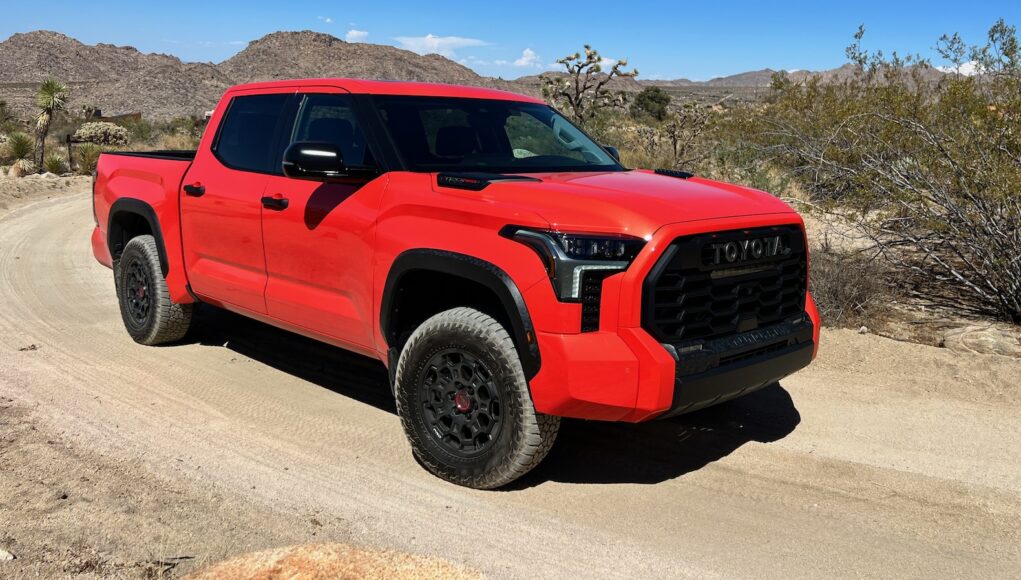 Toyota finally revamped the Toyota Tundra for the 2022 model year, which now makes it more competitive with rivals, like the Ford F-150, Chevy Silverado and Ram 1500. Everything from the previous generation has been thrown out, which includes the new 3.5-liter turbocharged V6, a new 10-speed automatic transmission, and improved tech.

Starting with what’s under the hood, the old 5.7-liter V8 has been thrown out. The Tundra is available with a choice of two 3.5-liter twin-turbocharged V6 engines. The TRD Pro comes standard with the more powerful i-Force Max hybrid version, which combines the V6 with a 48 hp electric drive motor and the 10-speed automatic transmission. Yup the most rugged version of the Tundra lineup, also has a slight focus on fuel efficiency. The powertrain generates a nice 437 horsepower and 583 pound-feet of torque.

While the first ever Tundra hybrid is a great addition, the i-Force Max powertrain is more focused on power than fuel efficiency. The Tundra TRD Pro is rated at 18 mpg city, 20 mpg highway and 19 mpg combined, which is only a slight improvement over the standard i-Force engine that’s rated at 17/22/19 mpg with four-wheel drive. During our week with the Tundra TRD Pro, which mostly involved highway driving, we only averaged 16 mpg. The Ford F-150 hybrid beats the Tundra hybrid, with up to 25 mpg across the board for the two-wheel drive version and 23 mpg with four-wheel drive.

Under the skin, the 2022 Tundra is based on a new GA-F truck platform that has already spawned the new Land Cruiser and Sequoia. The next-generation Tacoma and 4Runner will also be based on the same platform. The new platform helps the Tundra drop weight and it’s also 20 percent more rigid. At the rear there’s also another big change, the traditional rear leaf springs have been deleted and replaced by a five-link suspension with coil springs. The TRD Pro ups the ante with 2.5-inch Fox internal bypass coil-overs and a 1.1-inch front lift, which makes it even more capable when the pavement ends.

On the road, the 2022 Tundra is a huge improvement over its predecessor. The hybrid powertrain packs a nice punch thanks to all that torque that’s available at only 2,400 rpm. The hybrid system’s transition between the gas engine and electric motor is seamless. Most of the time it’s hard to tell if you’re in EV mode, but most of the time you aren’t since it can only stay in EV mode up to 18 mph. Compared to the last Tundra, the new suspension is incredibly smooth even with the more off-road geared setup with the TRD Pro. The Tundra TRD Pro is definitely smoother and more refined on the road, than the TRD Pro versions of the Tacoma and 4Runner. Its steering is also nicely weighted with more feedback.

When the pavement ends the Tundra TRD Pro shines. It’s not as rugged as the Ford F-150 Raptor or Ram TRX, but once you don’t have that expectation, you’ll see how great the Tundra is. The TRD Pro can take nearly everything that you can throw at it. The Fox dampers keep everything under control and the five-link rear suspension helps it feel more refined than you would probably expect in this segment. Overall the latest Tundra TRD Pro is more capable and fun to drive than before.

The Tundra also gets the Crawl Control and Multi Terrain Select systems and an electronic locking rear differential. The Crawl Control, which is basically a cruise control system for off-roading, is a great companion.

There isn’t a bad seat in the house with a comfortable and spacious interior. The TRD Pro also comes standard with the panoramic sunroof, which provides an airy feel, in addition to the power rear window. The TRD Pro also comes standard with leather seats, and heated and ventilated front seats that provide a more luxurious feel. Even with its off-road focus, the TRD Pro’s interior is quiet and serene.

At the end of the day, the 2022 Toyota Tundra TRD Pro is massive improvement over the last generation. It’s impressive powertrain, updated tech and more capable chassis are stand outs.