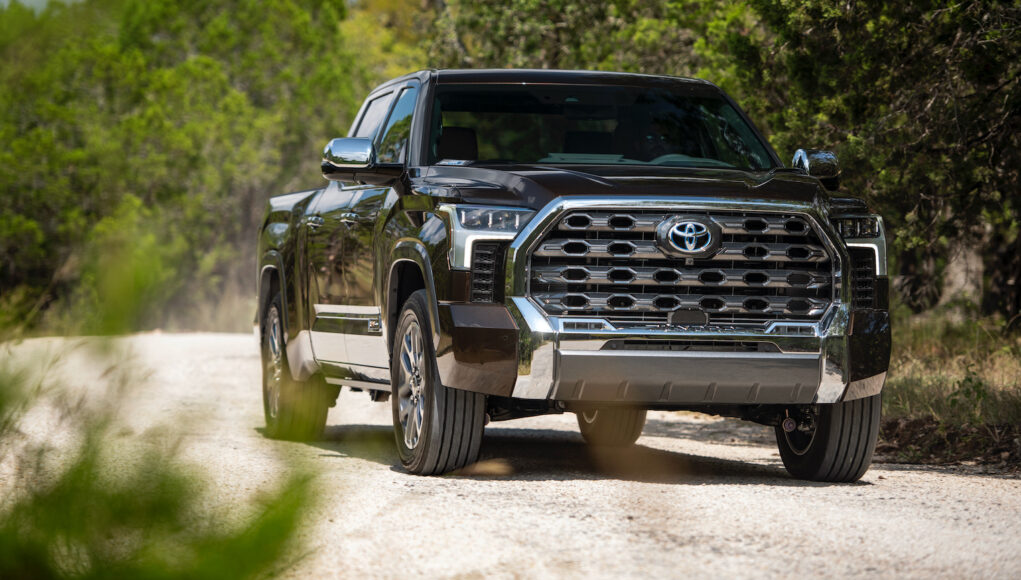 It’s been a long time since Toyota released a new Toyota Tundra, but the new truck is finally here. The new Tundra throws out everything from its predecessor, since it’s new from the ground up. The end result is a much more modern full size pickup truck with improved powertrains, a more modern interior and a bolder exterior.

For starters the 2022 Tundra switches to a new global platform that is shared with the new Land Cruiser. This same platform is also expected to be used by the next-generation Tacoma, 4Runner and Sequoia models. We can expect all of the models built off this platform to use similar powertrains and the same suspensions.

Under the skin, there’s a big change at the rear where the former leaf springs have been replaced by coil springs and a five-link suspension. The rear coil springs improve the ride and handling of the Tundra, while not compromising towing or payload capacity. There are also optional load-leveling rear air springs. There are actually five different suspensions available, with three of them being TRD versions.

The TRD Sport package adds Bilstein shocks that are tuned more for on road performance, while the TRD Off-Road package is tuned for off-roading. The Tundra TRD Pro adds Fox 2.5-inch internal bypass shocks, a TRD anti-roll bar and a 1.1-inch lift at the front. The TRD Pro is also the most adventure-ready version with its locking rear differential and off-road driving tech, like Crawl Control.

The suspension and new electric power steering system significantly improve the Tundra’s driving dynamics. The steering feels more direct and the suspension does a good job of limiting body roll. The TRD Sport suspension is a bit rough over uneven pavement, but some of that could also be due to the larger wheels.

Now for what powers the new Tundra. The big news is that the V8 from the last Tundra has been thrown out and in its place, the Tundra is now powered by an i-Force 3.5-liter turbocharged V6. Before you freak out, the new V6 actually packs more power than the old V8. The V6 generates 389 horsepower and 479 pound-feet of torque, which is eight more hp and 78 lb-ft. more than the old 5.7-liter V8. The V8 is mated to a new 10-speed automatic transmission.

Toyota gave us the opportunity to drive the old Tundra and the new Tundra back to back and the differences are significant. The new engine feels more refined than the old V8. The engine has an impressive torque curve and gets the Tundra moving down the road with ease. But if you still want more power, there’s the new hybrid powertrain.

The hybrid engine is called i-Force Max, which mates the 3.5-liter V6 to an electric motor that’s sandwiched in between the engine and 10-speed automatic transmission. The powertrain generates a combined 437 hp and 583 lb-ft. of torque. The electric motor is powered by a 1.87-kWh nickel-metal hydride battery pack that sits below the rear seats. While the idea of a hybrid truck may grab the attention of buyers that want to save fuel, the caveat here is that the Tundra hybrid is tuned more for power than fuel efficiency.

The Tundra hybrid will get slightly better fuel economy than the standard version, but its small battery only gives it a short window to stay in EV mode. At speeds below around 18 mph the electric motor can power the truck, but that also depends on how much you punch the throttle. Pull away from a stop slowly then the engine will probably stay off longer, but if you move aggressively away from a stop, the engine will power up sooner. Toyota has not revealed the Tundra hybrid’s EV range, but there also isn’t an EV button, so you’re at the mercy of the powertrain.

Around town the hybrid powertrain packs more of a punch than the standard engine, which is Toyota’s goal. The V6 and electric motor operate seamlessly and it’s easy to feel the extra instantaneous torque from the electric motor. Toyota has yet to release the fuel economy specs for the hybrid, but we wouldn’t expect a huge difference from the standard engine. For now we’ll just have to wait until a fully electric Tundra arrives.

It’s worth noting that the iForceMax hybrid powertrain is standard on the TRD Pro and optional on the Limited, Platinum and 1794 models.

The Tundra can tow between 11,170 to 12,000 pounds depending on which version you choose. The non-hybrid version has the highest tow rating. The Tundra also has a maximum payload rating of 1,940 pounds. Neither the payload rating or tow ratings are class leading. There are two tow modes: Tow/Haul and Tow/Haul+, with the latter being for heavier loads.

The new Tundra also gets a dent resistant sheet-moulded compound bed. There’s also a clever new button on the driver’s side taillight that you can push to drop the tailgate when your hands are full.

Inside is where it’s at. The new Tundra has a vastly improved interior that feels more modern and luxurious than any of its predecessors. The big news is the addition of a new infotainment system that is light years ahead of Toyota’s current system. This is the first application of the new system that has more modern graphics and better usability. The system is available in either an 8- or 14-inch touchscreen. The Tundra also comes standard with wireless Apple CarPlay and Android Auto. A Wi-Fi hotspot is available, which lets you stream Apple Music and Amazon Music directly in the system without your phone.

In front of the driver there’s a new optional 12.3-inch digital display, while analog gauges and a 4.2-inch MID display are standard. Other new features, include a digital rearview mirror, wireless charging, heated and cooled front and rear seats, and a panoramic sunroof. The power rear window is only on the CrewMax model.

While the new Tundra won’t likely make a big dent in Ford F-Series or Ram 1500 sales, Toyota isn’t really marketing the new truck as a workhorse. Instead it’s designed as a fun, active truck for adventure seekers. Given that, Toyota has largely succeeded with the new Tundra. It’s bold styling stands out, the new interior is a significant improvement and the new powertrains make you forget all about that old V8.

Toyota has not announced the pricing for the 2022 Tundra, but it will go on sale in December. If you want the i-Force Max engine you will have to wait until next spring.