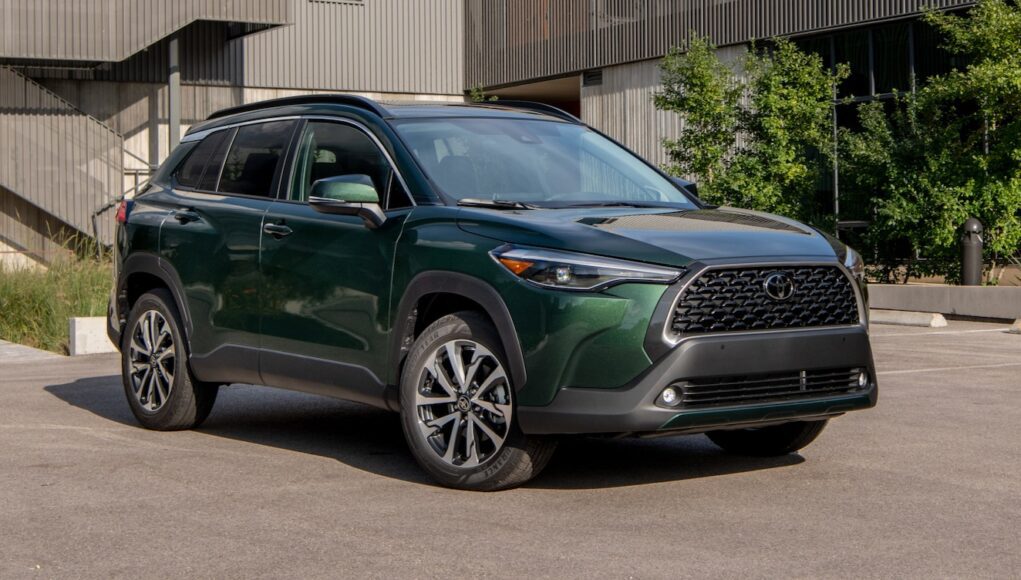 Crossover and SUVs continue to dominate the sales charts, so it’s no surprise that automakers have continued to carve out new segments to continue filling up their lineups with them. Toyota already has a pretty big crossover/ SUV lineup, but now it’s adding a new one – the 2022 Toyota Corolla Cross. As its name suggests, the Corolla Cross is a crossover version of the popular Corolla.

It’s clearly aimed at Corolla buyers who want more versatility than the hatchback or sedan versions can provide. This is very evident on the inside where the interior is nearly identical to the other Corolla models. It’s more spacious than the C-HR, but a bit more snug than the RAV4, as you would expect. It also has up to 26.5 cubic feet of cargo space with the rear seats up, which enlarges to up to 66.8 cubic feet with the seats folded.

The Corolla Cross’s cabin is just as comfortable as the sedan with the extra ride height adding the icing on the top. The interior can easily fit five passengers, although the wider RAV4 adds more room for the three passengers in the back. On our drive around Austin, Texas, the Corolla Cross’s interior is quiet and serene with the only noise coming in being from the powertrain when you push it hard.

Speaking of the powertrain, the Corolla Cross is powered by a 2.0-liter four-cylinder engine with 169 horsepower, that’s mated to a CVT. Around town the engine packs enough power to get the Corolla Cross moving down the road, but if you need to pick up speed fast, like on a highway on ramp, the engine runs out of steam. While we would like a bit more power under the hood, the Corolla Cross’s performance is on par with the rest of its small crossover rivals.

Moving past the powertrain, the overall driving experience is not entirely sporty, but close to what the experience you get with the sedan. The steering is really light and the suspension is tuned more for comfort, so getting from point A to B is easy and drama free, but not very fun.

We did ask if Toyota has plans to make any sportier versions of the Corolla Cross, like an SE or XSE version, but as of right now Toyota says that it has no plans to. It does seem odd that an SE or XSE trim level isn’t available considering that the sedan and hatchback offer the sportier trim levels. But that could easily change if buyers ask for a more stylish and sporty version. An XSE would also liven up the exterior a bit, which is more conservative than both the C-HR and RAV4.

The Corolla Cross is available with all-wheel drive, unlike the C-HR, which is only available with front-wheel drive. The all-wheel drive system can send up to 50 percent of the power to the rear wheels. It can also tow up to 1,500 pounds. The FWD version gets an estimated 32 mpg combined, while the AWD version gets up to 30 mpg. For buyers that want more fuel efficiency, Toyota has confirmed that a Corolla Cross hybrid will debut in 2022, likely as a 2023 model.

On the tech front, the Corolla Cross comes standard with a 4.2-inch display in the gauge cluster and a 7-inch display with Apple CarPlay and Android Auto compatibility. The LE and XLE trim levels get a larger 8-inch screen and wireless charging for your phone. Neither screen offers wireless Apple CarPlay or Android Auto. The top spec XLE also gets a 7-inch digital display in the gauge cluster. Both the infotainment system and 7-inch MID display do look a bit old with dated graphics.

At the end of the day, the 2022 Corolla Cross is a solid new entry in the small crossover segment. It takes everything that buyers already love about the Corolla sedan with some extra versatility thrown in. Toyota says that it can build up to 150,000 units a year and we can easily bet that Toyota will not have a hard time selling that many.