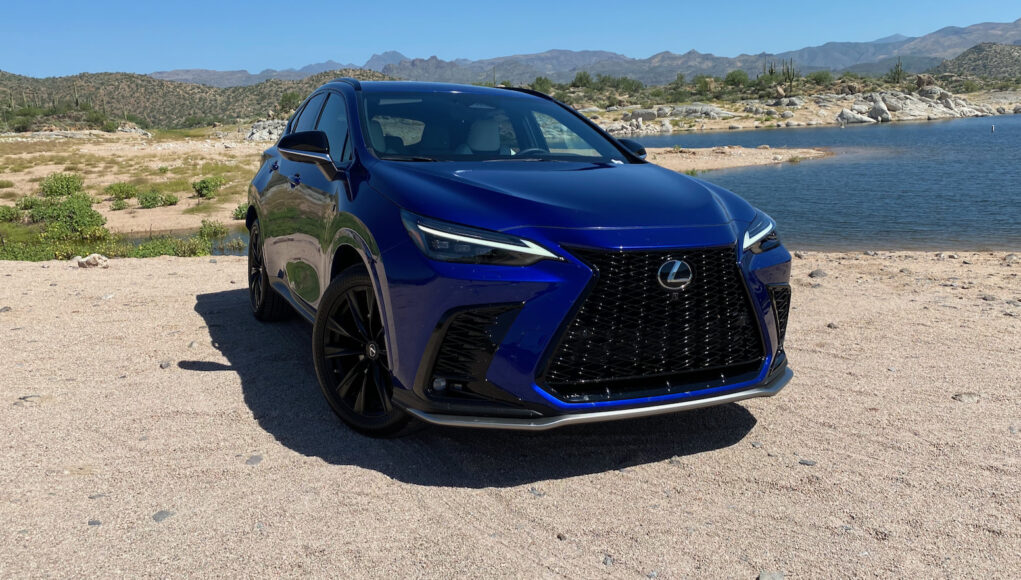 The Lexus NX compact crossover originally debuted in 2014 as a strong rival to other small crossovers, like the Acura RDX and BMW X3. Over the years some of its rivals have leap frogged the NX, but now Lexus is out to put the NX at the top of the class with the all-new 2022 NX.

On the outside the new NX isn’t a huge departure from the first generation, but it has grown a bit, which translates to more interior room and cargo space. The shape may look similar, but it the styling has been refined to give it a cleaner look and at the same time look slightly more aggressive. At the end of the day if you already liked the way the first NX looked, you shouldn’t have any issues with the styling of the 2022 NX. We also like the new Lexus badge at the rear that replaces the traditional L badge.

Inside the changes are much bigger where the new NX now has a more modern and luxurious interior than its predecessor. The interior is wrapped in higher quality materials and the overall design of the interior is a lot more attractive. The optional panoramic sunroof also helps make the interior feel more spacious.

The biggest news inside is that the NX ditches the old, much hated infotainment system for an entirely new system called Lexus Interface. The new system is now one of the best in the class. It comes in two flavors, either a 9.8-inch touchscreen or a larger 14-inch screen. Yup that means you no longer have to look down to the small mouse pad to control, like in the old NX. The system also looks far more modern and it’s very responsive.

Lexus Interface also comes with wireless Apple CarPlay and Android Auto, plus it integrates Apple Music and Amazon Music in the system via the 4G LTE modem. The system also loves voice commands, which you can start by simply saying “Hey Lexus” and the system will perform many tasks, from finding you the nearest dry cleaners to turning on the windshield wipers. The system can also store user profiles in the cloud. The NX also lets you use your phone as a key, which also lets you create a temporary key for several friends.

The new infotainment system is just one of the tech upgrades, since there’s also a new digital gauge cluster and an optional head-up display. There’s also a new steering wheel with improved buttons.

On the safety front the NX comes standard with the Safety System Plus 3.0, which includes automatic emergency braking, adaptive cruise control, automatic high beams, lane-departure warning and road-sign recognition. Some new additions include the system’s ability to detect oncoming cars during a left turn and apply the brakes to avoid a collision. When turning right it can also detect pedestrians or cyclists and also apply the brakes if needed.

Now for the changes under the hood. The 2022 NX is available with four different powertrains. The base NX 250 is powered by a 2.5-liter naturally-aspirated four-cylinder with 203 horsepower and 184 pound-feet of torque, that’s mated to an eight-speed automatic transmission. It’s rated at 25 mpg city and 32 mpg highway. The NX 250 is available with front- or all-wheel drive, but the other powertrains are only available with AWD.

Lexus says that the NX 350 will be the top selling model in the lineup and the good news is that the new turbocharged four-cylinder is up for the task. It packs enough punch to get you moving around town with ease and the transmission shifts smoothly. The 2.4-liter engine will easily satisfy the needs of most buyers.

The NX’s driving dynamics have also been improved, since it now sticks to the road better when the road gets a bit twisty. Body roll has also been reduced, making the new NX more fun to drive than its predecessor.

At the end of the day there is little to complain about in the new NX. Lexus has improved the interior significantly, which will help Lexus attract younger buyers. The new exterior keeps it looking fresh and the four different powertrains will help it appeal to the masses. Kudos to Lexus for the much improved 2022 NX.