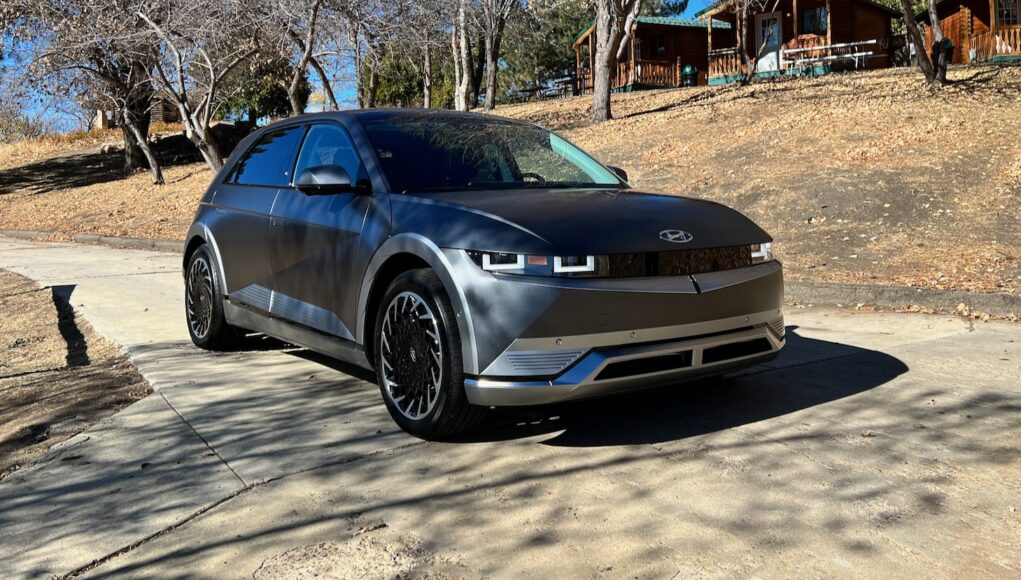 Hyundai will soon offer several models under the Ioniq sub-brand and the first of those is the 2022 Ioniq 5. It’s an electric SUV with styling that gets it noticed and specs that are hard to ignore.

The Ioniq 5 is based on Hyundai’s new E-GMP platform, which is a dedicated EV platform. The Kia EV6 and Genesis GV60 are also based on the same platform. Compared to the original Ioniq, the Ioniq 5 keeps its hatchback-like shape, but it’s got a larger footprint. The Ioniq 5’s wheelbase is longer than the three-row Palisade’s at 118.1-inches. It’s also 182.5-inches long.

Thanks to those dimensions, the Ioniq 5’s interior is spacious, in fact it’s more spacious tan the Ford Mustang Mach-E and Volkswagen ID.4 with 106.5 cubic feet of interior volume. The only area where it suffers a bit is in the back where it only has 27.2 cubic feet of cargo space, which is less than you’ll find in some of its rivals.

On the outside, the Ioniq 5 looks great with a futuristic/ retro look that helps it stand out from other electric SUVs. The hard creases and unique front and rear lighting are definitely attention grabbers.

The 2022 Ioniq 5 is available in either single- or dual-motor versions, in addition to two battery pack options. The base Ioniq 5 SE Standard Range features a single electric motor at the rear and a 58 kWh battery pack. It has 168 horsepower and a 220 mile driving range. The rest of the Ioniq 5 lineup gets a 77.4 kWh battery, which gives it up to 303 miles of range with the single motor or 256 miles with the dual-motors.

The long-range SE has 225 hp, while the dual-motor version packs 320 hp. The all-wheel drive version is the quickest version with a 0-60 mph time around five seconds. How does it compare to its rivals, the Ioniq 5 with the 77.4-kWh battery has a longer range than the Chevy Bolt (259 miles) and the VW ID.4 (260 miles), but it’s still a few miles below the Tesla Model Y (316 miles).

To eeek out as many miles as possible, the front motor has a clutch that can mechanically disconnect it from the wheels when it’s not needed. If you put it in the Sport or Snow both motors are powered up, while in Normal mode the system automatically disengages the front motor when it’s not needed. In Eco mode most of the power comes from the rear motor.

The Ioniq 5 is no slouch when both motors are on, the Ioniq 5 accelerates with ease. It’s not as sporty as the Mustang Mach-E, but it’s more fun to drive than the ID.4. The dual-motor version picks up speed fast, but it’s suspension is geared more towards comfort, than sport. The suspension is soft, but body roll is kept to a minimum. The steering is also light, but it’s still good. Overall we were impressed with how responsive the Ioniq 5 is.

There are also five regenerative braking settings that can be selected via the steering wheel paddles. We also liked the I-Pedal mode that allows for the fun one-pedal driving, since it can bring the Ioniq 5 to a stop without using the brake pedal.

Charging the Ioniq 5 is impressive, since it’s capable of taking up to 250-kilowatt charging speeds using a DC fast charger. With the fastest charging speed you can charge the battery from 10-80 percent in around 18 minutes. Using a 240-volt charger, it takes seven hours to fully charge it from 10 percent.

The Ioniq 5 also has a vehicle-to-load feature that with the optional adapter, you can plug in small appliances via the charging port. This is excellent for a tailgating party or a camping trip. The Ioniq can also charge another electric vehicle via its 120-volt outlet.

Inside the Ioniq 5’s interior features a minimalistic and modern design that looks and feels like a big step up from the original Ioniq. In front of the driver there are two 12.3-inch screens that includes the gauge cluster and the infotainment system. Both screens look modern and clean, but since they have a hoodless design, they are pretty bright at night. It would also be great if some of the settings, like the seat heaters could be turned on via a button, instead of using the touchscreen.

The Ioniq 5’s interior feels very spacious in the front with a big open space in between the driver and front passenger. The center console is big enough to hold a small bag and it can slide rearward. While you’re waiting for it to charge you can also sit back and relax thanks it its front seats that nearly fold flat and retractable leg rests.

On the safety front, the Ioniq 5 comes standard with a long list of features, like a blind-spot monitor, front collision avoidance with pedestrian and cyclist detection, and rear-cross traffic alert. The Ioniq 5 will also help you avoid a collision when making a left-hand turn thanks to its front sensors that can detect oncoming traffic. The sensors can also help you avoid a T-bone collision when crossing an intersection.

The adaptive cruise control also features machine learning so that it can customize the acceleration, braking and even the spacing that you prefer. The Highway Driving Assist II system also adds lane-centering steering assist, which will adjust the Ioniq 5’s position in a lane if a vehicle in the adjacent lane crosses the line or gets too close. If you opt for the Limited trim level you also get a 360-degree camera system and a blind-spot camera that turns on with the turn signal.

Now for the pricing, the base Ioniq 5 starts at $40,925, including destination, but before any tax incentives. The SE with the bigger battery pack and rear-wheel drive starts at $44,875, while the dual-motor version starts at $48,375. The top spec Limited AWD version is priced at $55,725. The Ioniq 5 is eligible for the $7,500 federal tax credit in addition to any state incentives.

Hyundai is ready to battle other small electric SUVs with the Ioniq 5’s bold styling, long driving range and attractive pricing. Right now we can easily say that the Ioniq 5 is one of our favorite models in the segment. It sets a new standard.