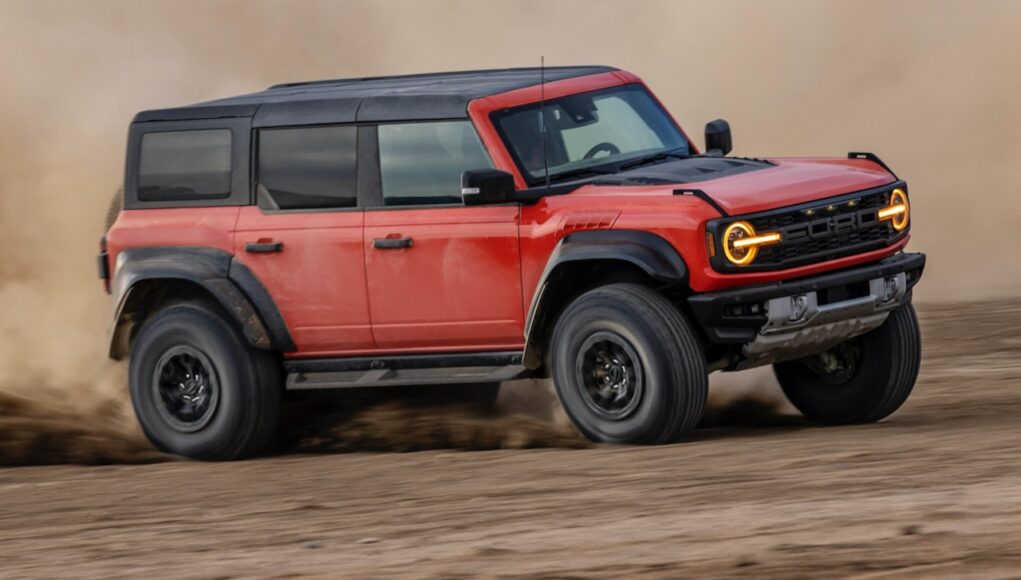 It’s here! Ford has officially unveiled the 2022 Ford Bronco Raptor – the high performance version of the off-roader. The Bronco Raptor gets a long list of upgrades over the standard Bronco, including a different engine, a new long-travel suspension and some styling changes.

Starting with the exterior, the Bronco Raptor is taller and wider than any of the other Bronco models at 77.8-inches and 9.8-inches wider. Its track widths are also 8.6-inches wider. The Bronco Raptor rides on 17×8.5-inch beadlock-capable wheels wrapped in 37-inch BFGoodrich K02 tires. It also gets bigger fenders that are made from a new sheet-molding material.

You can also easily spot a Bronco Raptor thanks to its unique F-O-R-D grille that has 50% greater flow-through to improve cooling. The grille also has a set of amber clearance lights that are required, due to how wide the Raptor is. Speaking of width, the Bronco Raptor is almost a foot wider than the Jeep Wrangler Rubicon. Other upgrades include a new modular steel bumper with integrated Rigid LED fog-and off-road lights, and a power-dome hood.

At the rear there’s a new beefier spare tire carrier, which required that Ford also update the lighting at the back with new taillights and a redesigned third brake light. The new larger spare tire would have blocked the view of the original taillights from some angles, so you’ll notice that the new ones stick out more.

Now for what’s under the hood. The Bronco Raptor is powered by a twin-turbocharged 3.0-liter EcoBoost V6 that’s also used by the Ford Explorer ST and Lincoln Aviator. Ford hasn’t released the specs, but it does say that the engine is “targeted to deliver more than 400 horsepower.” The V6 is mated to a 10-speed automatic transmission and you can control it via the new paddle shifters behind the steering wheel. Sadly a manual transmission isn’t happening.

To make it even more capable off-road, there’s a three-mode four-wheel drive system gets a higher-capacity clutch and an uprated transfer case that delivers a 67.7:1 crawl ratio. The disconnecting front sway bar also reconnects at higher speeds at 30 mph on road and 50 mph off road. The base Bronco can reconnect at 20 mph. The rear axle features a semi-float Dana 50 Advantek axle with a 9.3-inch ring gear and at the front there’s a Dana 44 Advantek with 8.3-inch ring gear.

The suspension has also been upgraded with new shock towers, control arms and other parts. The Bronco Raptor has 13 inches of suspension travel at the front and 14 inches at the rear, plus 13.1-inches of ground clearance. The Raptor also gets adaptive Fox internal-bypass shocks from the F-150 Raptor.

Inside there’s a new steering wheel, performance seats, and code orange and fake carbon-fiber accents. In front of the driver there’s also a new 12-inch fully digital gauge cluster, which is an improvement over the standard gauge cluster.

The 2022 Ford Bronco Raptor is slated to arrive this summer. The pricing starts at $69,995, including destination.