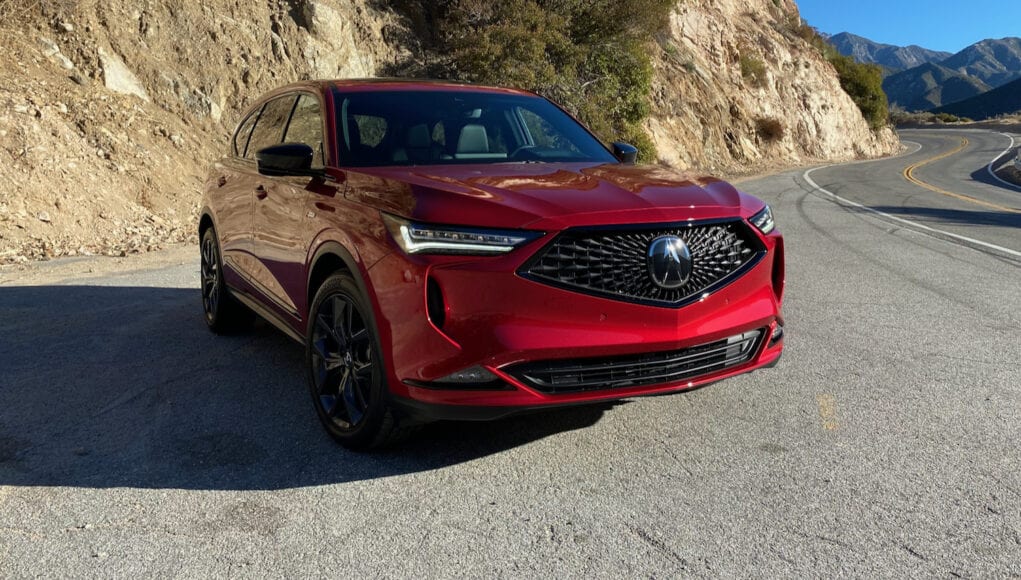 Acura recently introduced an all-new TLX and next month the next new model will arrive at dealerships, the 2022 MDX. The redesigned TLX is a nice improvement over its predecessor and now we’re ready to see if Acura has the same success with the fourth-generation MDX.

The 2022 MDX is important for the brand, since it’s not only the brand’s best selling model of all time, but it’s also now positioned as the brand’s flagship, since the RLX sedan has been discontinued. Although the MDX is incredibly important, Acura decided to not play it safe with the 2022 MDX and we are very happy about that.

The 2022 MDX gets the same sporty and sculpted look as the TLX. It’s now the most stylish MDX yet and thanks to a longer dash-to-axle ratio (4 inches longer), it’s proportions are more similar to a rear-wheel drive based SUV. It’s also longer and wider than its predecessor. Overall the look helps the MDX stand out more in the crowded crossover segment.

Thanks to the increased length and width, the interior also now has more room where it’s needed, in the third row. There are now 2.4-inches more legroom and the headroom has been increased slightly to give the two passengers in the third row more space. A 6-foot tall passenger can now fit back there without squirming too much. One negative is that we wish the third row seats had a power folding feature, which is something that is offered by the MDX’s rivals.

Cargo space has also increased slightly too, since there’s now 16 cubic feet of cargo space behind the third row, one more cubic feet than before.

The MDX comes standard with seven seats, but the center seat in the second row can either be folded down to create a large center console or removed to create two captain’s chairs. If you’ve ever spent some time with the Honda Odyssey, you’ll realize the center seat is similar. The good news is that this means that buyers don’t have to choose between either a three-row bench seat or two-person captain’s chairs at the dealership, like the MDX’s other rivals.

Just like the exterior, the interior of the new MDX is a major style improvement. The design is similar to the RDX and TLX, but it feels and looks even more luxurious. The materials have been significantly improved with genuine wood and metal. The center of the dash features a 12.3-inch infotainment system with the available ELS Studio audio system. Although we’ve already have experience with the touchpad for the infotainment system, it still takes a bit to get used to.

In front of the driver there’s also Acura’s first digital instrument cluster. The 12.3-inch screen can be customized with a few different layouts to show what info is important to the driver.

Under the hood not much has changed, since the naturally-aspirated 3.5-liter V6 carries over. It generates 290 horsepower and 267 pound-feet of torque. Acura decided against offering its 2.0-liter turbo in the MDX. There is a new transmission though, since the nine-speed automatic has been swapped out for a new 10-speed automatic.

The V6 packs ample power to get the MDX moving down the road with ease and the lower first gear helps improve its performance off the line. Gear changes are smooth from the new automatic and we do like the sound of the V6 when it’s pushed hard.

If you want more power, then you’ll want to wait for the MDX Type S that’s coming this summer. It’s powered by a 3.0-liter turbocharged V6 with 355 horsepower and 354 pound-feet of torque. That’s also the same engine that will power the TLX Type S.

The last generation MDX was offered with a hybrid powertrain and although Acura hasn’t announced any plans for a new MDX hybrid, it’s most likely coming in the future, since Honda plans to electrify most of its lineup in the coming years.

One downside is that the new MDX is slightly less fuel efficient than its predecessor with its combined rating losing 1 mpg for both the front- and all-wheel drive versions.

The MDX is also based on a new light truck platform that’s exclusive to the Acura brand. The new platform is more rigid and at the front the MDX gets an independent double wishbone suspension, like the new TLX. The new front suspension provides a larger tire contact patch in corners and improves the overall ride quality. At the rear there’s also a new multi-link suspension. On our drive through the hills of Los Angeles, the MDX felt sportier than you’d expect from a large three-row crossover. The MDX liked being pushed hard around corners and it felt a lot more nimble than others in this segment.

We can also credit Acura’s SH-AWD system for how great the MDX drives. The latest version can send up to 70 percent of the torque to the rear wheels and up to 100 percent of that available torque to either rear wheel. The system is one of the MDX’s highlights and is definitely worth the $2,000 upgrade over the front-wheel drive version.

If you want to dial up the fun a bit more, there’s the Sport mode that adds a little more weight to the variable-ratio steering and also sends more power to the rear wheels.

Acura has added something for everyone with the new MDX. There’s more interior space for the family, it’s now more fun to drive and the added tech features are welcome additions to the three-row crossover.