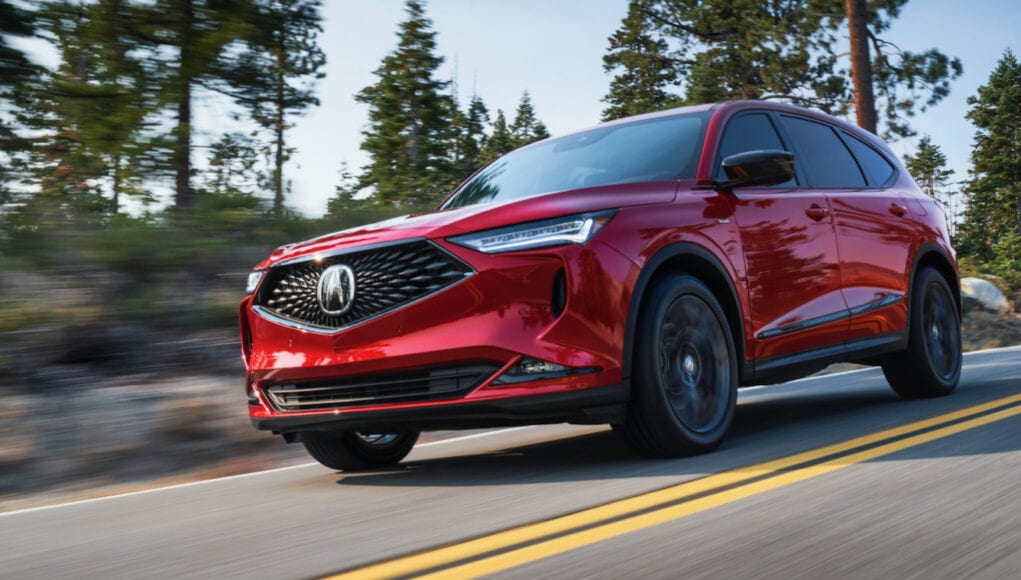 Acura recently gave us a preview of the 2022 MDX with the MDX Prototype in October and now we have our first look at the production version. The good news, just as we expected, is that the 2022 MDX is pretty much identical to the prototype.

Acura says that the 2022 MDX has received its most “radical design transformation yet” and that it also features “most high-tech and advanced cockpit in the brand’s 35-year history.”

The 2022 MDX is now more stylish than any of its predecessors with its sculpted body and more aggressive stance. It’s also larger than before, at 2.2-inches longer, 1.0-inch wider, and 0.6-inches taller. It’s wheelbase has also been stretched 2.8-inches, which provides more interior space than before.

The new MDX is based on a light truck platform with its first-ever double-wishbone front suspension and a new multilink rear suspension. The new platform is more rigid and thanks to the upgraded suspension, the new MDX “targets the driving dynamics of a sport sedan.” It also more powerful brakes with larger and thicker front brake rotors, and a new electric brake booster.

The 2022 MDX has an improved steering system with a new belt-driven Electric Power Steering (EPS) with a high-output electric motor for increased steering assist, which Acura says is essential for the quicker steering ratio afforded by the new variable gear ratio steering system.

Under the hood the MDX is powered by a 3.5-liter V6 with 290 horsepower and 267 pound-feet of torque that’s mated to a 10-speed automatic transmission. The rear-biased Super Handling All-Wheel Drive system is optional. It can send up to 70 percent of the engine torque to the rear axle normal driving conditions and up to 100 percent of that rear-axle torque between either the left or right rear wheels.

For those that want more power, Acura has also announced the first ever MDX Type S, which is powered by the same 3.0-liter turbocharged V6 as the TLX Type S. It generates an estimated 355 horsepower and 354 pound-feet of torque. The MDX Type S comes standard with all-wheel drive, 21-inch wheels, larger brakes and 4-piston Brembo front calipers. The MDX Type S will arrive in the summer of 2021.

Inside the MDX now has its most luxurious interior yet with high quality materials like, open-pore wood, brushed aluminum and Milano leather. The 12-way front seats feature three levels of seat heating and three-position memory, while the MDX A-Spec adds ventilated front seats and 16-way adjustment. In the second row the middle seat can be used for a seventh passenger, folded down for a wide center armrest or removed entirely.

On the tech front, the 2022 MDX features the Acura Precision Cockpit, which replaces the analog gauges with a 12.3-inch digital driver’s meter. A 10.5-inch head-up display is available and in the center of the dashboard there’s a 12.3-inch display for the infotainment system. The infotainment system is controlled via a touchpad. Lastly there are three different audio systems available: a base system with 9-speakers and 350 watts, an ELS Studio system with 12 speakers and 550 watts and a ELS Studio 3D system with 16 speakers and 710 watts.

The MDX comes standard with the AcuraWatch safety suite, which includes adaptive cruise control, road departure mitigation, traffic sign recognition, pedestrian detection and traffic jam assist. The MDX will feature a new front and rear automatic braking system that uses parking sensors to detect objects at low speeds. It can warn the driver or applies the brakes to avoid a collision. Lastly the 2022 MDX also gets the new front passenger airbag that launched with the 2021 TLX, which uses a three-chamber design that functions much like a baseball catcher’s mitt to protect the front passenger’s head in a collision.