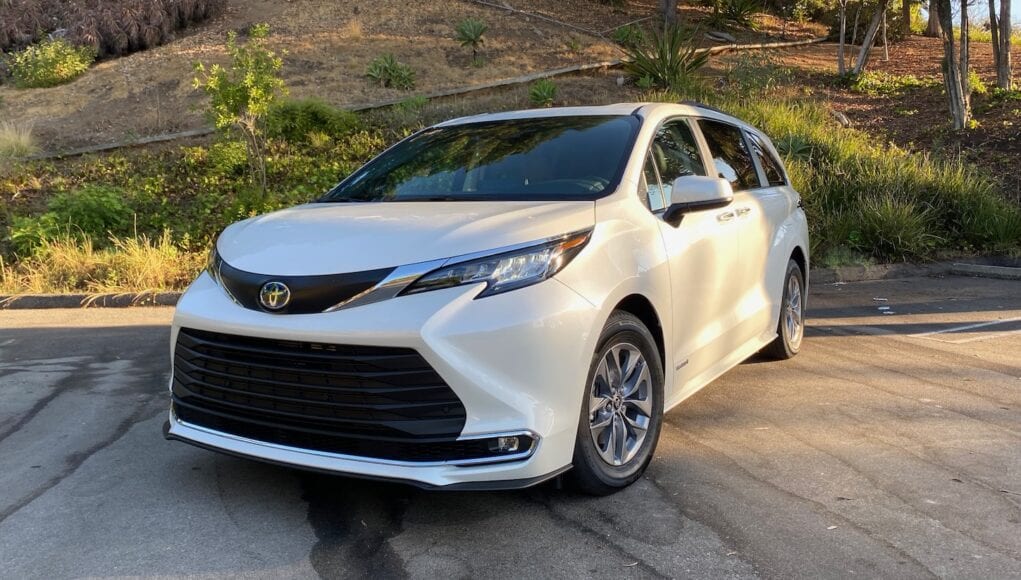 No one has ever said that a minivan is cool, although Toyota tried to get close with the “Swagger Van” marketing campaign for the previous generation Sienna. Now Toyota is trying even harder to ditch the stigma that have plagued minivans ever since they became popular in the 1980s and 1990s with the 2021 Sienna. It’s the most aggressively styled Sienna to date.

The 2021 Sienna has a bold new exterior that does try to look a bit more like an SUV than before. It’s taller hood makes you think the Sienna is an SUV, well from at least the front. The sliding doors make it impossible to ignore the fact that the new Sienna is still a minivan. As you move back, the Sienna looks more pleasing with its sculpted body.

Under that more stylish exterior, the Sienna is now based on Toyota’s TNGA-K platform, which is also used by the Highlander and RAV4. The wheelbase is 1.2-inches longer and a new multilink rear suspension improves the how the Sienna feels on the road. The Sienna feels more planted to the road than before and its steering has also been improved.

Under the hood there’s now only powertrain option, a hybrid powertrain. The ld 3.5-liter V6 has been ditched and now the Sienna is powered by a 2.5-liter four-cylinder engine that’s mated to two electric motors to generate a combined 245 horsepower. If you want all-wheel drive, that’s an option, but that system has changed too. The all-wheel drive Sienna gets a third electric motor that powers the rear wheels. Its two biggest rivals, the Honda Odyssey and Chrysler Pacifica both have more horsepower with the Odyssey packing 280 hp and the Pacifica having 287 hp under the hood.

Those ratings put the Sienna ahead of the Honda Odyssey and the standard Chrysler Pacifica, which are both rated at  19 mpg city, 28 mpg highway and 22 mpg combined.

Also even with its small 1.9 kWh nickel-metal-hydride battery, the Sienna can travel short distances, at low speeds in electric mode.

Minivan buyers don’t really care about acceleration numbers and instead care more about fuel efficiency, which is why Toyota made the right decision to switch to a hybrid powertrain. The 2021 Sienna is slower off the line than the last generation, but again few buyers will actually care. Around town the new Sienna gets up to speed without too much drama, but it does feel a bit slower than the Odyssey and Pacifica. The Odyssey is also a bit more fun to drive than the Sienna. The good news is that it can tow up to 3,500 pounds.

Inside the interior is a significant improvement over the last Sienna. This time it feels more luxurious and less like a bus behind the wheel. The dashboard is more stylish and there’s plenty of tech features, like a 10-inch color head-up display, a 9-inch touchscreen and a 12-speaker JBL audio system. We do wish that Toyota had upgraded the software for the infotainment system, since it still feels old and the gauge cluster also doesn’t feel very modern.

The good news is that the Sienna does comes standard with Apple CarPlay and Android Auto and there’s an available 11.6-inch rear-seat entertainment screen. An integrated vacuum cleaner and a mini refrigerator are also eventually going to be available.

Your friends and family will appreciate the attention that Toyota paid to the Sienna’s interior. It’s more spacious and comfortable than before. The second row seats can even more 25 inches fore and aft, plus if you opt for the Limited or Platinum version with front-wheel drive, the seats turn into recliners with a lower fold-out section to make you even more comfortable. The third row is also comfortable and it can completely fold down to provide more space for your stuff.

Minivans may not get as much attention as they used to, but you’ll have a hard time finding a more versatile vehicle for the family. If you are in the market for one, the segment is getting more competitive with the arrival of the new Sienna and the refreshed Chrysler Pacifica and Honda Odyssey. This time around the Sienna stands out more thanks to its excellent fuel economy, more stylish exterior and an interior that will keep even the most vocal kid comfortable.