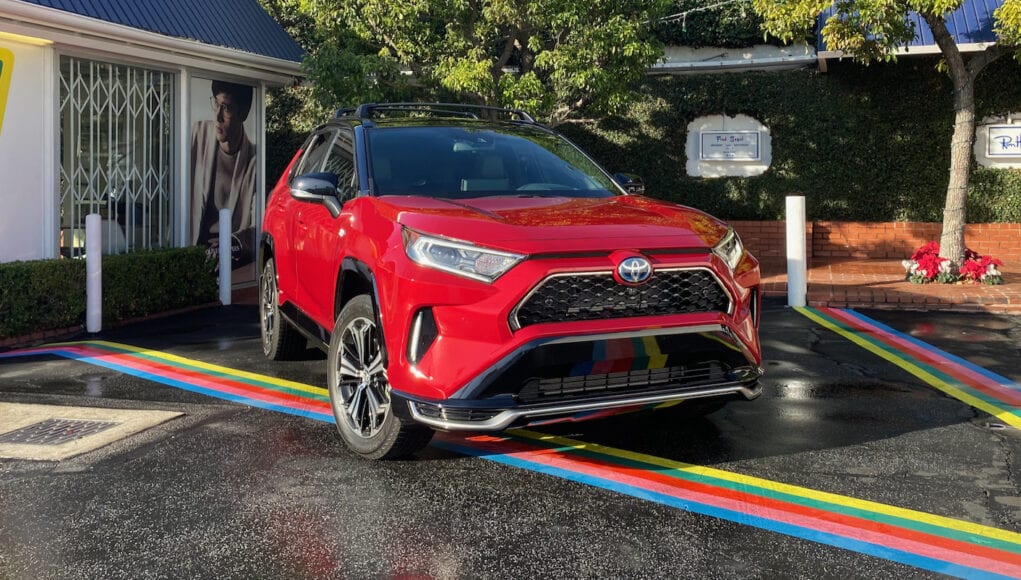 Toyota is credited for putting hybrid vehicles on the map, but we’ve been waiting for Toyota to jump in the fully electric vehicle segment for a while. Fortunately Toyota recently confirmed that it will unveil two new EVs for the US at some point this year. But in the meantime, Toyota does offer an excellent plug-in hybrid, the 2021 RAV4 Prime.

The 2021 Toyota RAV4 Prime sits at the top of the RAV4 lineup, not only because it can travel up to 42 miles on a single charge, but it’s also the most powerful RAV4 available.

The RAV4 Prime is powered by a 177-hp 2.5-liter Atkinson-cycle four-cylinder that’s mated to Toyota’s Hybrid Synergy Drive system. The two permanent-magnet synchronous AC motor-generators at the front generate a combined 179 horsepower and 199 pound-feet of torque. There’s also an additional electric motor with 53 hp and 89 lb-ft. that powers the rear wheels. That means that the RAV4 Prime comes standard with all-wheel drive.

The powertrain also features an 18.1 kWh lithium-ion battery pack. The plug-in hybrid powertrain generates a combined 302 horsepower which is 83 more hp than the RAV4 hybrid.

Due to the extra components, the RAV4 Prime weighs 4,300 pounds, which is 545 more than the hybrid. Even with the extra weight, the RAV4 Prime can accelerate from 0-60 mph in 5.7 seconds, which makes it the second quickest model in Toyota’s lineup. Only the Supra is quicker.

It’s doubtful that many RAV4 Prime drivers will be racing for pink slips, so what’s more important is how efficient the plug-in hybrid is. In EV mode it has a 42 mile range, which beats the Ford Escape plug-in hybrid. It can also reach speeds up to 84 mph in EV mode.

On the road you can put it Auto/HV mode, which powers up the engine when you need extra power, like when you’re accelerating onto the highway. There’s also the full EV mode, which keeps the four-cylinder engine turned off. Plus there’s a hybrid mode that retains the charge of the battery and uses the engine to add some juice back into the battery.

In fully electric mode the RAV4 Prime takes 9.2 seconds to reach 60 mph. Accelerating from a stop is smooth and drama free. The transition from the internal-combustion engine to electric power is also seamless, but the four-cylinder engine does get a bit loud when it’s pressed hard. The continuously variable transmission also doesn’t help the soundtrack.

While the RAV4 Prime sounds sporty on paper, the driving dynamics are about the same as the other RAV4 models. Its suspension gives the RAV4 a smooth ride, but there’s a bit more body roll than we’d like. The steering is also a bit too light and the brakes aren’t great.

Charging the RAV4 Prime using a standard outlet will take 12 hours, while a 240-volt Level 2 outlet can charge the RAV4 in 4.5 hours. If you opt for the more powerful 6.6-KW onboard charger, you can recharge the battery in only 2.5 hours.

Inside most buyers will find a hard time differentiating the RAV4 Prime from the RAV4 Hybrid. The interior is spacious and the dashboard has a clean design with everything placed where it should be. Our only gripe is with the digital gauge cluster and the graphics for the infotainment system, which already look dated. The back-up camera also could be better.

The good news is that even with the large battery mounted under the floor, the RAV4 Prime has the same passenger volume as the other RAV4 models. Cargo space is down slightly at 33.5 cubic feet behind the second row, compared to 37.5 cubic feet in the other models.

The RAV4 Prime is offered in two versions: SE and XSE. The RAV4 Prime SE starts at $39,275 and comes standard with 18-inch wheels, an 9.0-inch touchscreen with Apple CarPlay and Android Auto, LED headlights. There’s an SE Prime Weather and Moonroof Package for $1,665 that adds a heated steering wheel, rear outboard passenger heated seats, rain sensing wipers and a moonroof.

The Prime XSE starts at $42,600 and comes standard with 19-inch wheels, a 9.0-inch touchscreen, and leatherette seats. There are two packages available. The Premium Audio, Dynamic Navigation Package for $2,435, which adds a heated steering wheel, rain-sensing wipers, a JBL audio system with 11 speakers and rear heated seats.

As of right now the RAV4 Prime only has two real competitors, the Ford Escape PHEV and the Mitsubishi Outlander PHEV. The RAV4 Prime has a better interior and also has a longer EV range than the Escape or Outlander.

At the end of the day we didn’t want to give the RAV4 Prime back. It takes everything that buyers already love about the RAV4, like its spacious interior and comfortable driving dynamics and adds in a great plug-in hybrid powertrain. Thanks to its 42 mile range, most buyers will rarely ever have to use the gas engine on their daily commutes. The RAV4 Prime is the prime example of a great compact plug-in hybrid SUV.