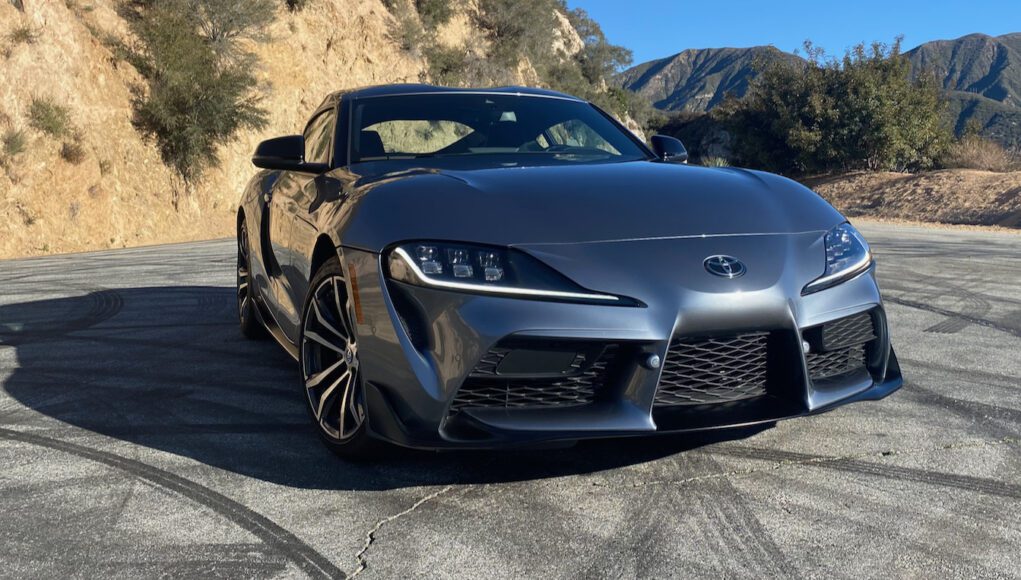 The return of the Toyota Supra was one of the most exciting recent additions to the Toyota lineup, but with a price tag over $50k, the GR Supra 3.0 is out of reach for most sports car buyers. Well if you’ve been drooling over the 2021 Supra, Toyota has made it a little easier to get the keys. Toyota has introduced the Supra 2.0, which is powered by a four-cylinder and starts at a more reasonable $44,085.

We like the lower starting price, but is the lesser powered Supra 2.0 just as exciting as the six-cylinder powered Supra 3.0? The turbocharged 2.0-liter four-cylinder generates 255 horsepower and 295 pound-feet of torque, compared to the turbocharged 3.0-liter inline six that packs 382 hp and 368 lb-ft. Both engines are mated to an eight-speed automatic transmission.

With 127 less horsepower, the Supra 2.0 is a bit slower than the Supra 3.0 with a 0-60 mph time of 5.0 seconds vs 3.9 seconds. Both models have an electronically limited top speed of 155 mph. One positive is that the four-cylinder powered Supra weighs in at 3,181 pounds compared to the heavier six-cylinder version at 3,400 pounds.

Toyota was able to shave off some weight in addition to the lighter engine, by giving the Supra 2.0 smaller wheels (18-inch vs 19-inch), smaller front brake rotors, and manual seats. Toyota also deleted the adaptive dampers and electronically controlled limited-slip differential.

We do wish a manual transmission was on the options list, but the eight-speed automatic works well here. It’s just not as engaging to drive as manual. The Supra’s suspension does an excellent job with killing any sort of body roll when you enter a corner and its steering is perfectly weighted.

The four-cylinder Supra not only saves you money at the dealership, since it’s also more fuel efficient than the six-cylinder. It’s rated at 25 mpg city, 32 mpg highway and 28 mpg combined, compared to 22/30/25 for the six-cylinder.

The other good news is that the Supra 2.0 doesn’t look that different from the Supra 3.0. Both versions get the same sculpted body with a look that stands out. We love the double-bubble roof and the broad hips that makes sure the Supra gets noticed.

Inside the supportive seats are wrapped in leather and Alcantara. You may think it’s odd that they aren’t powered, but the seats have multiple settings to make sure you and your friend are comfortable. At the top of the dashboard, there’s an 8.8-inch display that runs an old version of the BMW iDrive system. The system is not very easy to navigate, but it does offer wireless Apple CarPlay. Sorry Android users.

If you’ve been in a BMW lately, you’ll easily recognize the climate controls and other buttons that are sourced directly from BMW. Our biggest gripe with the interior is that it’s really hard to see out of the Supra. The big roof pillars and sculpted body hurt the visibility. If you do go for the Supra, we recommend you add the Safety and Technology package ($3,485), which adds blind-spot monitoring, rear cross-traffic alert, parking sensors and adaptive cruise control.

At the end of the day, the question remains. Should you buy the Supra 2.0 or the more powerful Supra 3.0? While we can’t ignore the soundtrack and power of the Supra 3.0 with its 382 hp six-cylinder, the four-cylinder Supra 2.0 is almost just as fun. It has the same sexy styling and handles almost just as well as the more powerful version. Plus at the end of the day, the Supra 2.0 is more affordable with a price tag that starts $8k lower than the Supra 3.0.