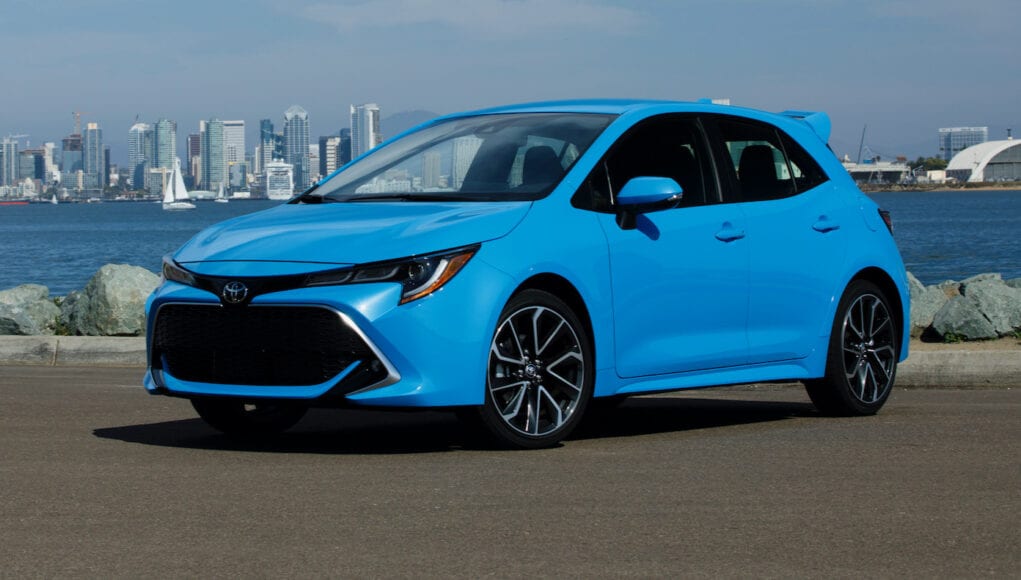 When the current generation Toyota Corolla debuted, Toyota first introduced the new generation with the Corolla Hatchback. We were pleasantly surprised that Toyota finally injected some excitement into the Corolla lineup – something that had been missing for years. Now two years after it arrived, the 2021 Corolla Hatchback is still a stylish compact hatchback that can hold its own against the Honda Civic and Mazda 3 hatchbacks.

In terms of styling, the Corolla Hatchback sits somewhere in the middle between the conservative, although classy Mazda 3 and the over the top Civic. It’s definitely far more stylish than most would expect from anything with a Corolla badge on it. The sculpted body looks sporty, especially if you opt for the XSE trim level with its 18-inch alloy wheels or the SE Nightshade Edition with its 18-inch black wheels and black trim and special body kit.

Inside the Corolla Hatchback’s interior looks modern and minimalistic. The focal point of the interior is the 8-inch touchscreen that sits just above the simple controls for the climate control system. The Corolla Hatchback comes standard with Apple CarPlay and Android Auto. If you opt for the CVT-equipped version, you can also add a navigation system and a JBL audio system. It comes standard with a 4.2-inch digital display in the gauge cluster, while a larger 7-inch display is optional.

The materials are also up to par with the more premium Mazda 3, especially if you opt for the XSE, which comes with leather seats, an eight-way power driver’s seat, dual zone climate control and optional wireless charging.

The only downside, is the interior doesn’t feel as spacious as the Civic Hatchback, especially in the back seat. The Corolla Hatchback has only 29.9-inches of rear legroom compared to 36.0-inches in the Civic. Cargo space is also not great with only 17.8 cubic feet of space with the rear seat up compared to 25.7 cubic feet in the Civic.

On the safety front, the Corolla comes standard with Toyota’s Safety Sense 2.0 package, which includes a pre-collision system, lane departure alert and adaptive cruise control. A blind spot monitor is available on the SE, but standard on the XSE trim level.

Currently the Corolla Hatchback is only available with one engine, a naturally-aspirated 2.0-liter four-cylinder with 168 horsepower and 151 pound-feet of torque. The good news is that a six-speed manual transmission is available if you want something more exciting than the CVT. The four-cylinder packs adequate power, but it’s not very exciting and sounds a bit unrefined when you push it hard. With a 0-60 mph time around eight seconds, the Corolla Hatchback is no “hot hatch”. Both the Civic and Mazda 3 have more power.

Our tester came with the manual transmission, which made it a bit more fun to drive, but even with the sport mode engaged, it’s still not as fun to drive as its rivals. The good news is that Toyota has already announced a fix. A GR Corolla hot hatch is coming and it’s expected to get a turbocharged three-cylinder. We can’t wait!

Driving the Corolla around town we can still see that Toyota placed more emphasis on comfort than sport. The Corolla Hatchback does have a sport-tuned suspension, but it still doesn’t feel as athletic as the Civic or Mazda 3. The suspension has a bit too much body roll and the light steering doesn’t provide much feedback.

If gas mileage is on your checklist, the Corolla Hatchback does have good specs with its 32 mpg city, 41 mpg highway and 35 mpg combined rating with the CVT. The manual version is rated at 28/37/31 mpg.

The 2021 Corolla Hatchback is offered in three trim levels, SE Nightshade Edition, SE and XSE. The pricing starts at $21,560 for the SE with the six-speed manual, while the CVT-equipped version starts at $22,660, including the destination charge.

At the end of the day the 2021 Toyota Corolla Hatchback is a strong rival to several fun to drive compact models, like the Civic and Mazda 3. It’s more stylish than several of its predecessors, comfortable and easy to live with. With the arrival of the Special Edition, Toyota already told us something even better is coming, “the 2021 Hatchback Special Edition foreshadows even more excitement still to come in the hatchback segment …” We can’t wait to see what the future holds.