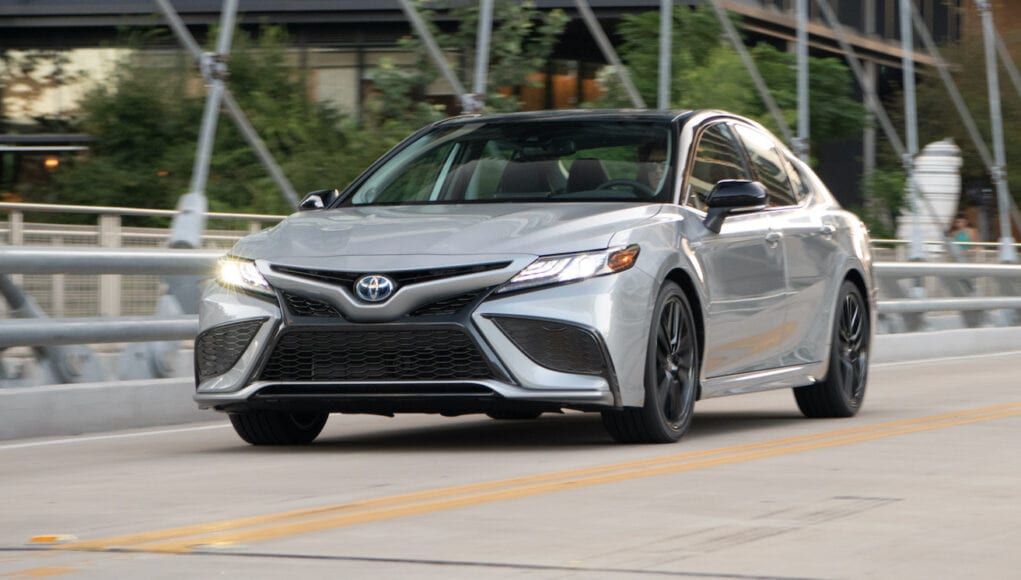 When the current generation Toyota Camry debuted for the 2018 model year, Toyota finally gave us what we had been asking for, for years, a more exciting Camry. Now three years later, the 2021 Camry is still a stylish midsize sedan that continues to stand out in the crowded segment. This year Toyota has given the Camry a midlife refresh that adds a sportier trim level for the Camry Hybrid and an updated infotainment system.

The biggest news for the 2021 model year is the addition of the XSE trim level for the Camry Hybrid. It combines the sporty styling and suspension of the SE trim level with the more luxurious interior of the XLE. The Camry XSE gives buyers that want a sporty midsize sedan all the style they need, combined with the more efficient powertrain. It’s basically the no compromise version to choose in the Camry lineup.

Inside the biggest change is the new infotainment screen that replaces the old screen that was integrated in the dashboard. The new screen “floats” at the top of the dashboard and measures 9 inches. A smaller 7 inch screen is standard on lower trim levels. The new 9-inch screen looks more modern than the previous version, but it still operates the same Entune software as before.

The Entune software isn’t too bad, since it doesn’t lag too much and it also has Apple CarPlay and Android Auto. We do wish it was a bit more updated though, since some of the graphics look a bit dated. The backup camera also could be clearer.

Inside five people can fit comfortably with taller passengers not having to complain about a lack of legroom in either the front or the back. There is a bit more room in the Accord, but the Camry is nearly just as roomy. Since the battery pack for the hybrid powertrain is located under the rear seats, there’s no compromise in the trunk. The Camry Hybrid has 15.1 cubic feet of cargo space, which is less than you’ll get in the Honda Accord Hybrid with its 16.7 cubic feet.

Under the hood the 2021 Camry Hybrid is powered by the same powertrain as before without any changes. It’s powered by a 2.5-liter four-cylinder and two motor-generators that generate a combined 208 horsepower and 163 pound-feet of torque. That’s more than enough power to get the Camry moving down the road with ease. During our week with the Camry Hybrid, we never that it was underpowered and the powertrain also has a nice refined feel.

The best part is that the Camry Hybrid is rated at 51 mpg city, 53 mpg highway and 52 mpg combined if you choose the LE trim level, while the SE, XLE and XSE trim levels are rated at 44/47/46 mpg.

The Camry Hybrid’s suspension also feels so smooth that you’ll think you’re driving a Lexus. The suspension does an excellent job of smoothing the road’s imperfections without too much body roll. We can thank the Toyota New Global Architecture (TNGA) platform for how well the Camry drives, since it feels more composed on the road than many of its predecessors. We might even use the term “athletic” to describe it.

The only downside we found had to do with the brakes, which are a bit too sensitive at lower speeds. This can cause some jerky braking until you get used to it.

At the end of the day, the 2021 Toyota Camry Hybrid is an impressive midsize sedan that’s powered by a great hybrid powertrain. It’s not boring to drive and if you aren’t a fan of the Prius, the good thing is that the Camry Hybrid has almost the same mpg ratings.