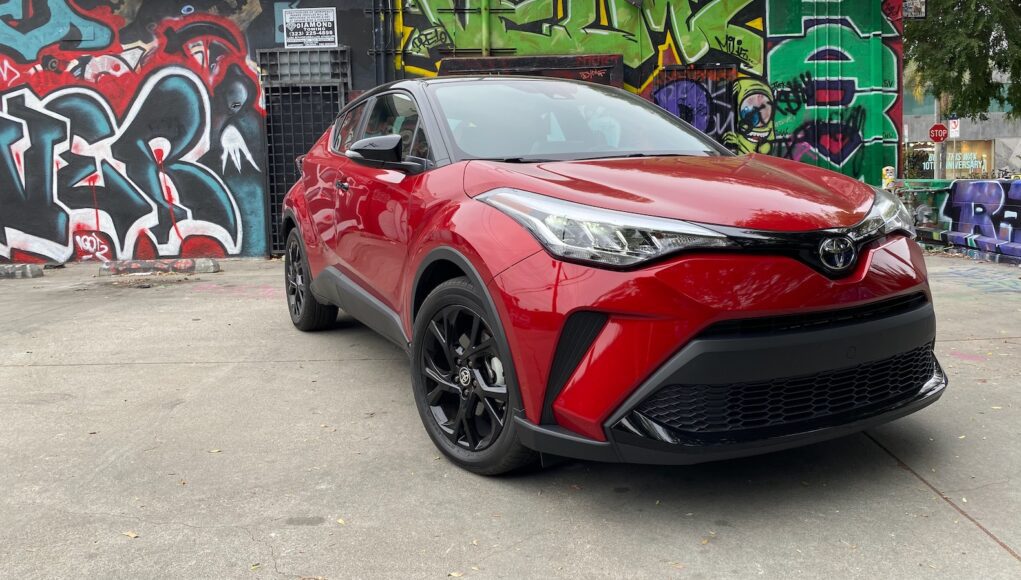 The small crossover segment is packed with models, ranging from the Honda HR-V, the Jeep Renegade and the Chevy Trax. With so many options we have to give Toyota props for trying to stand out more in the segment with the aggressively styled Toyota C-HR. The subcompact C-HR is a small SUV that’s perfect for an urban environment, but does its styling make up for some of its shortcomings?

The 2021 Toyota C-HR is powered by a 2.0-liter four-cylinder engine with 144 horsepower and 139 pound-feet of torque, that’s mated to a continuously variable transmission. The small engine works hard to get the C-HR up to speed and the CVT isn’t quite the soundtrack that our ears like. Push it hard and the cabin fills with noise from the powertrain, but without much speed. There is a Sport mode, but it just adjusts the transmission mapping, but it definitely doesn’t make the CH-R sportier to drive.

The C-HR is only available with front-wheel drive, which is just like the Nissan Kicks and Hyundai Venue. If you need AWD, you’ll want to check out the Honda HR-V, Jeep Renegade or Mazda CX-3. The C-HR is pretty efficient with its 27 miles per gallon city, 31 mpg highway and 29 mpg combined ratings, but those specs are below its rivals. The Nissan Kicks gets up to 36 mpg on the highway.

Around town the C-HR is comfortable and easy to drive, but if you want to drive up a twisty back road, the CH-R is not your friend. The steering is too light and vague, while the suspension is anything but sporty. We really wish the driving experience was as fun as the exterior would lead you to believe.

Inside there’s ample space for four passengers, with a fifth being able to squeeze in for short trips. There’s also plenty of legroom in the rear, even if the front passengers are on the taller side. The only gripe we have is the styling of the rear doors adds an awkward rear window that makes it have a really high beltline. This makes the rear seat feel smaller and somewhat claustrophobic.

That aggressive styling also doesn’t help the cargo capacity, since the C-HR only has 19.1 cubic feet of cargo space with the rear seats up. That increases to 37 cubic feet with the seats folded. To compare, the HR-V has up to 58.8 cubic feet of space.

The C-HR features an 8-inch touchscreen infotainment system with Apple CarPlay and Android Auto compatibility. Unfortunately the system is running the Entune system with its dated graphics. We also don’t understand why the back up camera is a low-res system, which makes it not very clear. The entire infotainment system just feels old, in fact, even older than the C-HR. Luckily Toyota is already working on a new infotainment system for its vehicles.

On the safety front, the 2021 C-HR comes standard with Toyota’s Safety Sense 2.5 tech suite, which includes adaptive cruise control, lane-departure warning, and forward-collision warning. A blind spot monitor is standard on all the trim levels, expect the base LE trim. Since everything else is included, we’re baffled that Toyota would not have the blind spot monitor standard.

The 2021 Toyota C-HR starts at $22,620, including destination, which makes it more expensive than several of its rivals. The midlevel XLE trim level starts at $24,655 and adds the blind spot monitor and a proximity key. The C-HR Nightshade edition that you see here features a black roof, black trim and black wheels. It starts at $25,420.

At the end of the day we’re happy that Toyota is placing more emphasis on style, but there are just too many compromises here that make it not as appealing as its rivals. Several of its rivals offer a sportier driving experience, more cargo space and a cheaper starting price.