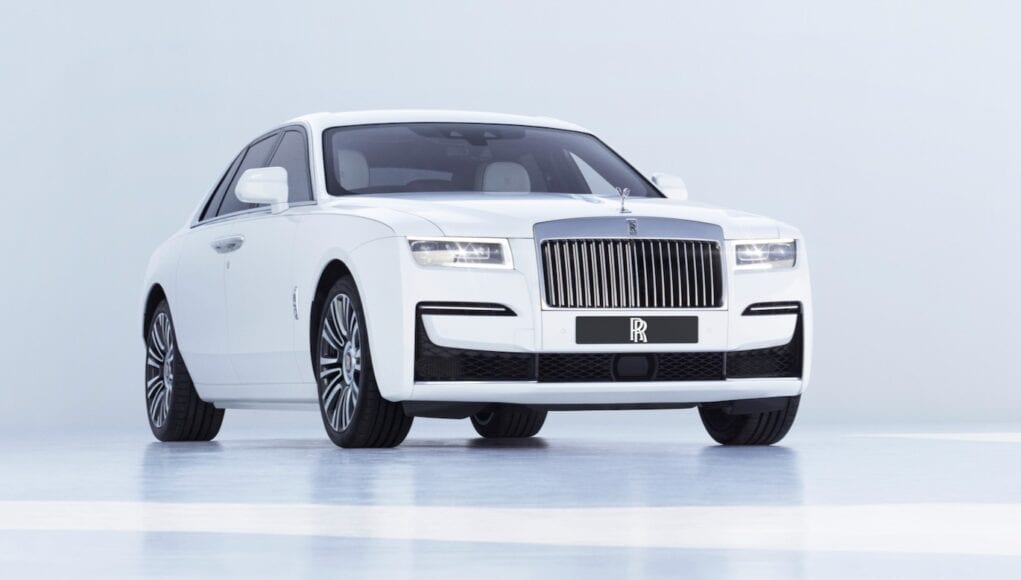 The new Rolls-Royce Ghost is officially here, since the covers were pulled off today. But at first glance it does look quite familiar, since the designers decided to not rock the boat too much with the new Ghost. Although it doesn’t look dramatically different than the last Ghost, the 2021 Rolls-Royce Ghost only shares two parts with its predecessor, the door umbrellas and Spirit of Ecstasy hood ornament.

For the 2021 Ghost, the designers went with a “Post Opulence” minimalistic approach, which gives the sedan a cleaner, smoother look. The Spirit of Ecstasy also now sits within its own “lake of bonnet” rather than on a separate panel. The headlights and taillights are also larger with a bit more style than before and the grille even has 20 LED lights under the top that shine down on the brush metal spokes.

Under the skin a lot more has changed, since the new Ghost ditches the BMW parts from the last model, which were shared with the BMW 7 Series sedan. Now the 2021 Ghost rides on the dedicated Rolls-Royce Architecture of Luxury, which is also used by the Cullinan and Phantom. The Ghost has the same 129.7-inch wheelbase as the Cullinan, but it’s 8-inches shorter.

The 2021 Ghost is powered by a 6.75-liter twin-turbocharged V12 engine that generates 563 horsepower and 627 pound-feet of torque. That’s enough power to give it a 0-60 mph time of 4.6 seconds and a top speed of 155 mph. All that power is now sent to all four wheels, which will help the Ghost appeal more to buyers that need all-wheel drive. The Ghost also now has rear-axle steering, which will make it a bit more agile and easier to drive at slow speeds, like in parking lots or valet lines.

Most Ghost buyers aren’t really interested in the 0-60 mph time and instead care about how smooth it drives, which is why Rolls-Royce created the “magic carpet ride”‘ effect with the Planar Suspension System. Rolls-Royce says that the suspension will “create a sense of flight on land never before achieved by a motor car.”

The Ghost has an upper-wishbone damper unit above the front suspension assembly, which will make the ride even more serene. The Ghost also has a stereo camera in the windshield that scans the road ahead and adjusts the dampers based on upcoming road-surface changes.

Inside the 2021 Ghost’s interior is cleaner and even more luxurious. The old interior has been swapped out with a design that is more minimalistic. There’s open-pore wood and all the leather is stitched together by hand. Even the “cold-to-the-touch real metal vents” are cool. Plus you don’t have to worry about breathing any dirty contaminants, since there’s the new Microenvironment Purification System. The air filtration system “is capable of removing nearly all ultrafine particles from the Rolls-Royce’s microenvironment in less than 2 minutes.”

While a lot has changed, there is one thing that hasn’t changed too much, the infotainment system. The Ghost now has an updated version of BMW’s iDrive 6 infotainment system, which means that Apple CarPlay and Android Auto aren’t available. But there are a pair of tablets for rear-seat passengers and a Wi-Fi hotspot to keep everyone connected. Also we can’t not notice the Illuminated Fascia, which is an illuminated faceplate on the passenger side of the dashboard with stars and the word “Ghost” that’s backlit when the cabin lights are on.