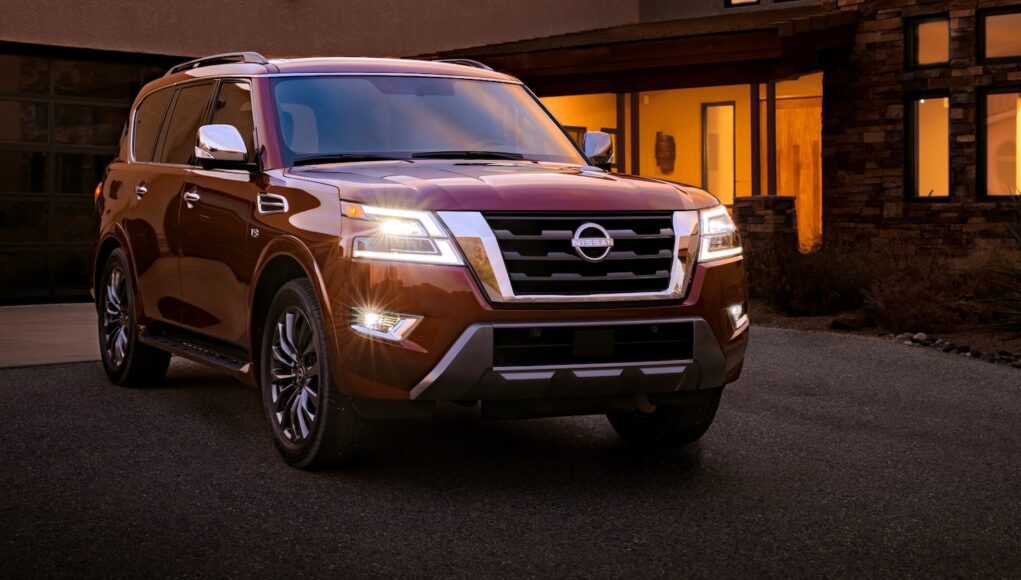 SUVs are all the rage right now, with automakers offer so many different types to appeal to the masses. Nissan has struggled over the past few years, but in one area it’s continued to offer a full lineup of options – SUVs. Today the brand offers six SUVs and Nissan is hoping that the major revamps that it’s given to its SUVs will help turn its fortunes around. The Pathfinder is all new and the small Kicks even got a refresh. At the other end of the lineup the big rugged Armada has also been given a throughout update.

We’ve already covered the updates to the Kicks, which will keep it at the top of the list for new car buyers. Now we got to spend some time with the 2021 Armada. The Armada is unlike any other SUV in Nissan’s lineup, since it is a big body-on-frame SUV, which is sold in other markets as the Nissan Patrol. It’s also closely related to the Infiniti QX80.

While the new Armada isn’t a complete redo, it does get styling updates and a more modern interior to help it rival other big SUVs, like the Ford Expedition and Chevy Tahoe. On the outside Nissan has squared things off a bit with boxier face with a new version of Nissan’s V-Motion grille, new headlights, a restyled bumper and a new hood. At the rear there are also new taillights and a new bumper to complete the more rugged look. While we would like to see an all-new Armada, the updates do freshen things up a bit.

Inside the big news is that there’s a new 12.3-inch touchscreen infotainment system. The new infotainment system is easy to operate and looks modern. It also gets a Wi-Fi hotspot, wireless charging pad and wireless Apple CarPlay. Android Auto is included as well, but you have to use a cord to operate it. We also like the Intelligent Rear View Mirror and 360-degree camera system. If you opt for the Platinum trim level you also get a rear seat entertainment system with two 8.0-inch screens. Will most buyers use the dual screens? Probably not since it’s a chore to get your device to connect to them. Most rear seat passengers will probably just use their phone or iPad to keep them from getting bored on a long road trip.

Getting in the Armada takes quite a jump, but once you’re inside the interior is spacious and comfortable. It actually feels quite luxurious, especially with the quilted leather seats on the Platinum trim level. Due to its higher ride height you also have a commanding view of the road. Accessing the third row isn’t too hard since the second row seats flip forward with the pull of a lever. The Armada has room for up to eight passengers, the third row can actually fit adults, but it’s not as roomy back there as the Expedition or Tahoe.

Under the hood 2021 Armada is powered by the same 5.6-liter Endurance V8, but now it has slightly more power at 400 hp and 413 pound-feet of torque. The V8 is mated to a seven-speed automatic transmission. The powertrain is smooth and packs a nice punch when you need it. The V8 accelerates without any drama and the transmission always managed to be in the perfect gear. The Armada can also tow up to 8,500 pounds, but as you’d expect its fuel economy specs are not great. It’s rated at 14 mpg city, 19 mpg highway and 16 mpg combined. Those specs drop by 1 mpg across the board if you go with the four-wheel drive version.

While the powertrain is good, driving the Armada takes a bit to get used to. Since it rides on a body-on-frame chassis and given its off-roading roots, it’s no surprise that the Armada is not sporty to drive. It feels top heavy and when the road gets twisty it lets you know that it’s not a crossover. There’s way too much body roll. Its steering could also be better, since it’s a bit vague without any actual feedback. The suspension may not be sporty, but it does manage to keep the road’s bumps and imperfections from ruining your day.

Nissan did a good job updating the Armada, which looks and feels more modern. The updates will help keep it competitive with its rivals until an all-new version arrives. The Armada is now a stylish large SUV for buyers that want good towing capability, 8 passenger seating and rugged off-road capabilities.