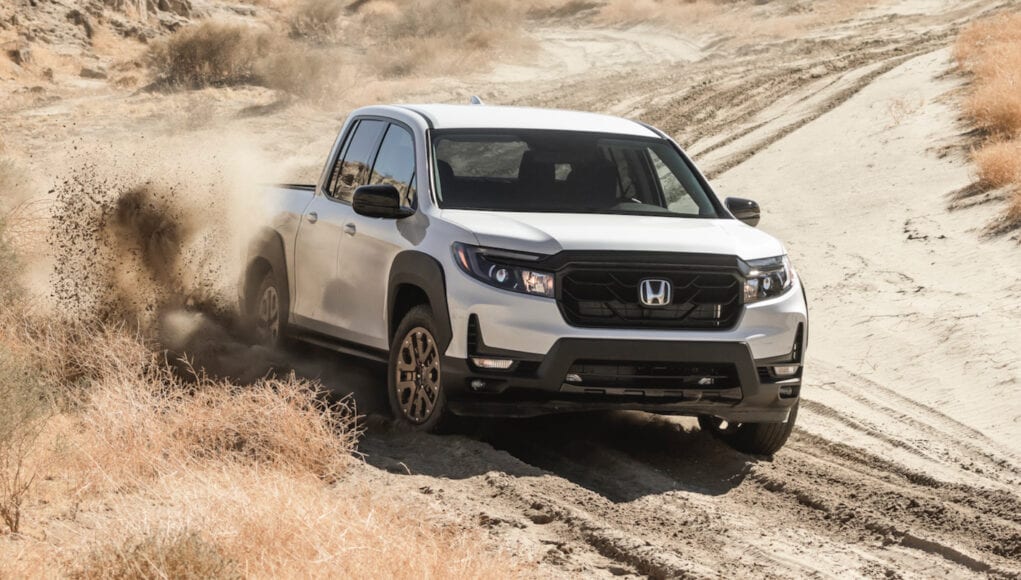 The Honda Ridgeline debuted back in 2005 with a unique take on the midsize pickup that was innovative, but it didn’t really make a big splash in the segment. When Honda revealed the second-generation Ridgeline in 2016, Honda softened the exterior to make it look more aerodynamic and fuel efficient, but then at the same time buyers said it didn’t look like a truck. Instead it was labeled as a Pilot with a pickup bed. Well now Honda has made some big updates for the 2021 Ridgeline and we can say it’s a great midsize pickup.

The biggest issue with the current generation Ridgeline had to do with its face being too soft and car-like. Meaning that it looked too much like a crossover, mainly the Pilot and Passport, which did nothing for truck buyers that want the rugged image that a truck provides. For the 2021 model year, Honda gave the Ridgeline a big facelift with everything ahead of the A-pillar being redesigned.

The hood and face are now taller and more squared off to make the Ridgeline look more like a truck now. The Ridgeline’s grille is bigger and more imposing, plus there are new headlights as well. Put the 2021 Ridgeline next to the 2020 model and the differences are big and noticeable. The other updates include new wheel designs and a redesigned rear bumper with exposed dual exhaust tips.

Inside the updates are smaller with the biggest update being new cloth seats and some new accents on the center console and dashboard. The interior is spacious and comfortable with lots of storage areas and functional features, like the rear seat that can be flipped up or down. The interior does have some hard plastic parts, but it’s still one of the best interiors in the midsize pickup segment.

The Ridgeline comes standard with an 8-inch touchscreen, with Apple CarPlay and Android Auto. The display audio infotainment system does look and feel quite dated, which is easily our only gripe with the Ridgeline’s interior.

The Ridgeline comes standard with automatic emergency braking, adaptive cruise control, lane-departure warning and mitigation, and lane-keeping assist. We do wish that blind-spot monitoring was standard, since all the trim levels get it besides the base Sport.

Under the hood, the Ridgeline is only offered with one engine, a naturally-aspirated 3.5-liter V6 that generates 280 horsepower and 262 pound-feet of torque, that’s mated to a 9-speed automatic transmission. Honda has killed off the front-wheel drive version, so every Ridgeline now comes standard with all-wheel drive with torque vectoring.

Truck buyers have dinged the Ridgeline by saying that it’s not a real truck, thanks to its crossover DNA, but Honda wanted to prove to us how capable it is. Honda gave us a chance to wring out the Ridgeline at its Proving Center in the Mojave desert.

During our adventure, we first started on a dirt course, with some hills and tight corners to show us how well the Ridgeline’s all-wheel drive system works. Then the second course took us through some deep sand, long straightways and tight corners to again prove how capable the Ridgeline is on the trails. The all-wheel drive system has the ability to send 70 percent of the torque to the rear wheels and 100 percent of that torque can be sent to either rear wheel.

The Ridgeline offers different driving modes, like Sand and Mud and Snow, which automatically adjusts how much power is sent to the rear wheels. In Sand mode we were able to punch the throttle from a stop and get the Ridgeline moving fast in the sand.

Back on the road, the Ridgeline really stands out compared to rivals, like the Chevy Colorado and Toyota Tacoma. The Ridgeline features an independent rear suspension that helps give it a more comfortable ride. The Ridgeline also has less body roll than its body-on-frame rivals. Driving down the highway, the Ridgeline feels more sophisticated and modern than the Tacoma or Colorado.

Being a Honda, it’s no surprise that the Ridgeline has some other tricks up its sleeve, like the dual-hinged tailgate that can swing both down or out. There’s also a 7.3 cubic feet lockable in-bed storage compartment. The Ridgeline is also the only midsize pickup truck that can carry a 4-foot wide piece of wood or any other object of that size between the wheel wells.

The Honda Ridgeline may not be as capable off-road as its body-on-frame rivals, but that’s ok. The majority of buyers aren’t climbing over hills and rocks everyday and instead still spend most of their time commuting to work, driving the kids to school and running errands to Home Depot. This is where the Ridgeline shines, it drives better than its rivals and its versatility puts it ahead of its class.