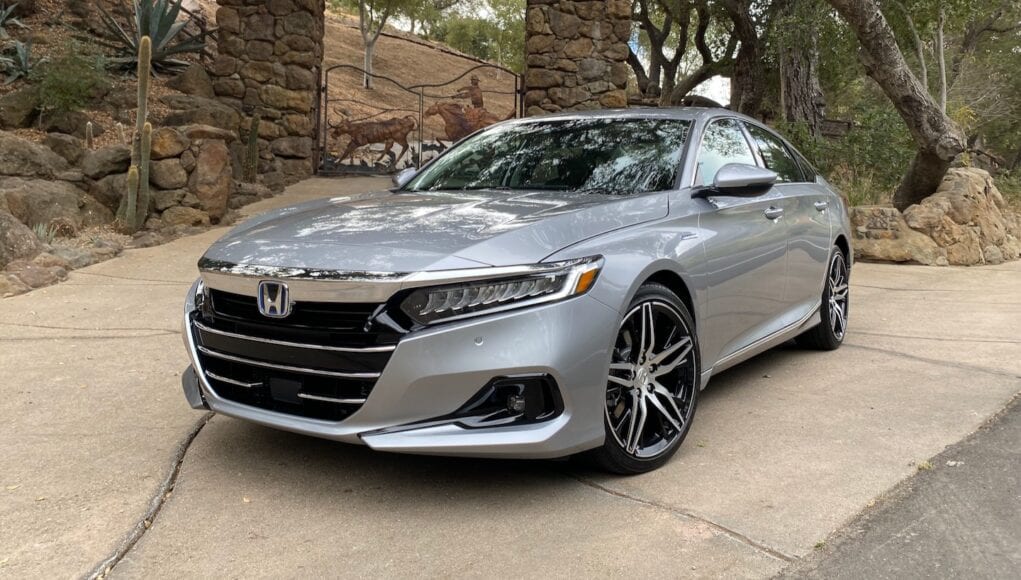 Gone are the days when a hybrid had to look dorky to squeeze out a few extra mpg. Today there are plenty of stylish hybrids on the market and one of them is the 2021 Honda Accord Hybrid. It’s a sexy midsize hybrid sedan, that not only looks good, but it’s fun to drive as well – something you’d never say about a hybrid just a few years ago.

For the 2021 model year, Honda has updated the Accord Hybrid with some small styling tweaks, new tech features and even a few adjustments to its hybrid powertrain.

On the outside, you probably won’t notice the styling changes too much, but they are there. At the front the Accord Hybrid’s face gets a new wider grille, that’s flanked by LED fog lights and new LED headlights on upper trim levels. The radar integration has also been improved to be a bit more discreet.

Inside the Accord Hybrid now comes standard with the 8.0-inch touchscreen with Apple CarPlay and Android Auto, which can be connected are wirelessly on upper trim levels. Wireless charging and rear seat USB chargers are also available and lastly there’s a new rear seatbelt reminder system.

On the safety front, a rear seat reminder system has been added as well as a new low speed braking control system, which can automatically apply the brakes if a collision is possible. Honda also updated the adaptive cruise control system to make it smoother and the lane keeping assist system has been updated to give it a “more natural feeling.”

Under the hood, the Accord Hybrid is powered by the same 2.0-liter four-cylinder engine that’s mated to two electric motors. The gas engine acts primarily as a generator for the electric motors that power the front wheels, but in some situations it can power up to send power directly to the wheels as well. The electric motors can also power the Accord Hybrid alone for short stretches. The powertrain generates 212 horsepower and 232 pound-feet of torque. The updates to the powertrain improve the acceleration and also improve the overall sound to make it sound more natural, which basically means that rubber-band sound has been reduced.

The updates make the Accord Hybrid feel a bit more responsive than before and although we still love the turbocharged 2.0-liter, the hybrid powertrain is now the sweet spot between the base 1.5-liter and the more powerful engine in the lineup. The hybrid powertrain not only has more power than the Accord’s base engine, but it also feels more refined. At higher revs the engine’s soundtrack does still get a bit loud, but it’s quieter than the CR-V Hybrid and Insight.

If you want to liven things up a bit more, there’s a Sport mode that improves the throttle response and also tightens up the adaptive dampers on the Touring trim level. Push the Sport mode button and you’ll be surprised at how nimble the Accord Hybrid is once your throw it into a corner. It feels planted and eager to have some fun in the twisties, which is something you probably wouldn’t expect from a hybrid midsize sedan.

Even with all the improvements to the 2021 Accord Hybrid, the good news is that it’s still affordable. The Accord Hybrid starts at $27,325, including the destination charge and the top of the line Touring trim level is priced at $37,195.

The Accord Hybrid is no longer just the sedan for buyers that want the greener option, since just like the CR-V Hybrid, it’s also the more refined and sportier option.