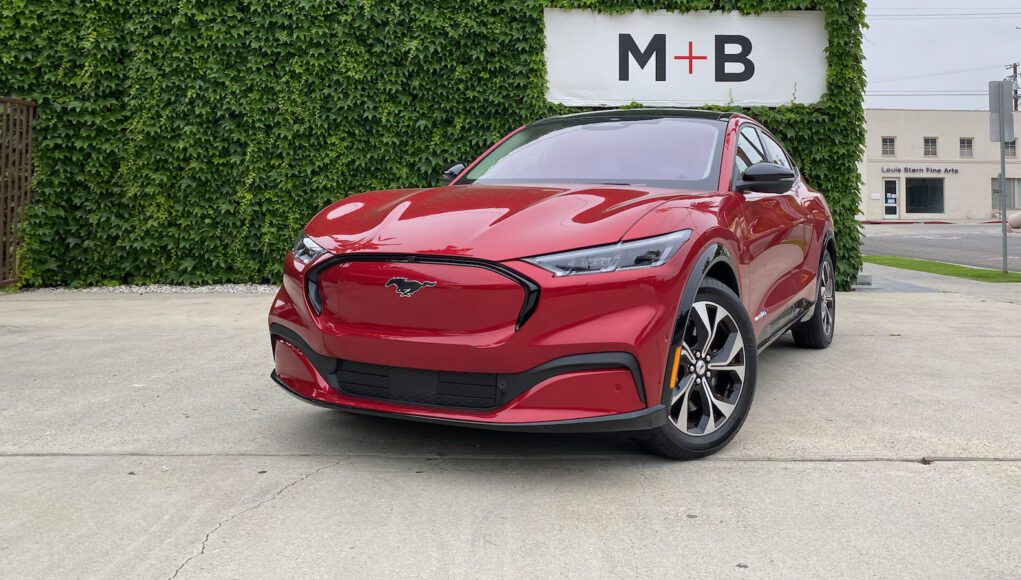 The electric crossover segment is heating up quick with several entries, like the Tesla Model Y, Volvo XC40 Recharge, VW ID.4 and the Ford Mustang Mach-E. So far one of them stands out – the Mustang Mach-E. Why? It’s inspired by the iconic pony car, but with its fully electric powertrain, spacious interior and instantaneous acceleration, it’s one of the best new arrivals in the EV segment.

Many Mustang fans may balk at the idea of an electric crossover with the Mustang name on it, but we can see why Ford chose this route, rather than just making a run of the mill EV. Design traits, like its long sloping hood line, the big grille and even the triple-bar taillights help it stand out. Compared to the Model Y, which can look a bit dowdy from some angles, the Mustang Mach-E looks sleek and sporty.

While the exterior takes some inspiration from the icon, the interior of the Mach-E is nothing like any other Mustang. To get inside you press a button on the door and then pull a tab to open the door. It takes a bit to get used to, but once you do it’s a cool trick. Inside there’s a huge 15.5-inch vertical touchscreen and a smaller digital instrument cluster. The vertical touchscreen looks great and the Sync 4 infotainment system is near perfect. It does take a bit to learn how to use it, since there are so many controls embedded in it. Lastly it does have Apple CarPlay and Android Auto compatibility.

The overall design is clean and minimalistic with premium materials, like its a faux stitched leather. Hard plastic has also been keep to a minimum, which makes the Mach-E look and feel luxurious.

Sadly if you want leather, you won’t be able to get it here, since the Mustang Mach-E is only available with a vegan option, called ActiveX faux leather. As with most EVs, the design of the exterior is optimized to give more room inside. The interior feels spacious and with up to 40.5 inches of rear headroom your taller friends won’t complain. There’s also 29.7 cubic feet of cargo space behind the second row and 59.7 cubic feet with the seats folded. In the front there’s the “frunk” to store a few smaller items.

The extended-range all-wheel drive Mach-E that we spent time with can accelerate from 0-60 mph in 4.8 seconds. Beyond the instantaneous acceleration, the Mach-E loves a good curvy road. The steering is nicely weighted and responsive and the suspension keeps everything flat without any significant amount of body roll.

The Mach-E is also great around town as well. It’s quiet and has a smooth ride, plus the one-pedal driving makes it even easier to drive, since the Mach-E comes to a complete stop when you lift your foot off the accelerator. If you don’t like the aggressive regen, you can also simply turn it off.

The Mustang Mach-E starts at $42,895 for the base Select trim level before any federal or state tax credits. That means the Mach-E is a bit more expensive than the ID.4 at $39,995 and the Chevy Bolt, which starts at $31,995. While the price may be a bit higher, it’s justified, since the Mach-E feels more premium with a lot more “sport” thrown into the mix than its rivals.

At the end of the day, the Ford Mustang Mach-E sits at the top of the growing list of electric crossovers. The styling stands out and its fun to drive. If the Mustang Mach-E is a preview of what we can expect from Ford in the future, its rivals better watch out.