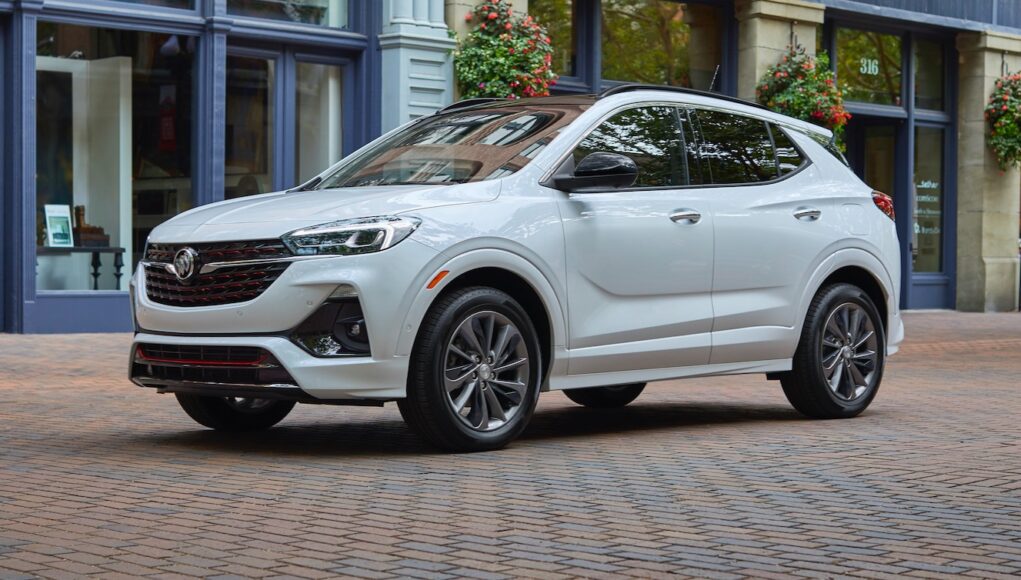 The 2021 Buick Encore GX steals the parking spot left between the smallest mainstream and luxury crossovers. Buick does a double take for the 2021 model year. It’s offering the older Encore hatchback while it introduces the new Encore GX, which isn’t much more expensive but slightly bigger. The GX is the Encore you want to drive, though, thanks to gains in styling, safety, and features. Offered in Preferred, Select, and Essence versions.

A turbo-3 engine powers the Encore GX, and it’s more impressive than the 4-cylinder it replaces. A lower-output 1.2-liter version comes standard, but a $395 upcharge brings the Encore GX a better-tuned 1.3-liter turbo-3 with 155 horsepower and ample low-end torque. Teamed with a continuously variable automatic transmission (CVT) or a 9-speed automatic (front- and all-wheel drive, respectively), the powertrain lays down eight-second 0-60 mph times, plenty for the Encore GX’s commuter-car mission. It rides well, but it’s not so interested in the loopy country roads you save for weekends.

Interior space seems more expansive in the Encore GX, though it’s not much larger than the Encore. Four adults fit well, but Buick fits narrow front seats that don’t fit wider bodies well. Ample back-seat head and leg room turn into 50.2 cubic feet of cargo space with the back seats folded down.

The 2021 Encore GX ranges from about $26,000 to more than $34,000. With standard touchscreen infotainment, power features, newly standard wireless Apple CarPlay and Android Auto, and options for Bose audio and a panoramic roof, we think the best Encore GX is the Select trim, with a sticker price near $27,000. Every Encore GX has automatic emergency braking, while blind-spot monitors and adaptive cruise control are available.

Our bottom line: The 2021 Buick Encore GX steals the parking spot left between the smallest mainstream and luxury crossovers. We think the Encore GX Select with the 1.3-liter, which comes with automatic emergency braking and a few choice features, is the best buy at about $27,000.