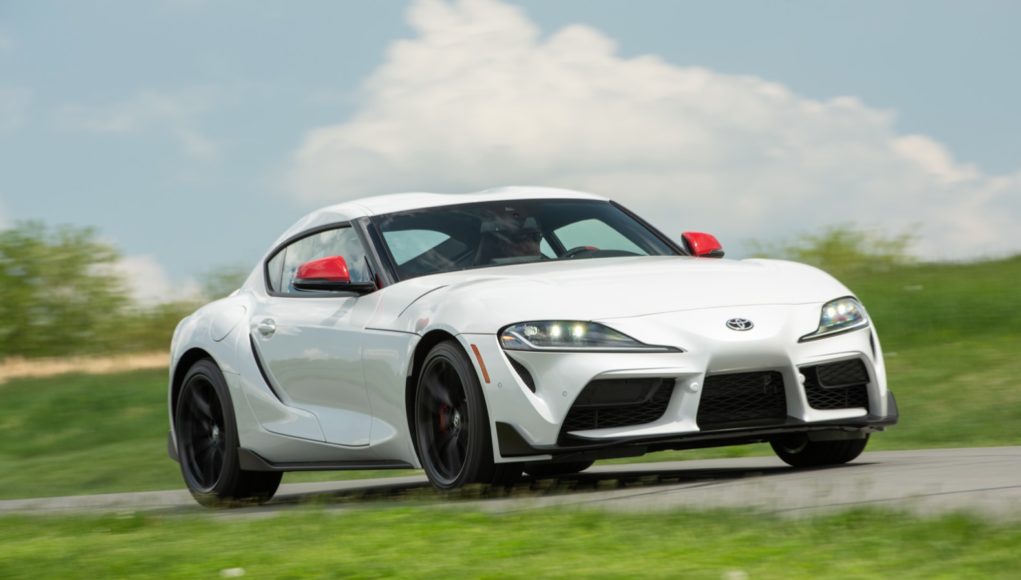 “No More Boring Cars!” That was Toyota’s mission when its new CEO came on board and we can definitely say that Toyota has succeeded with this goal. Look at the new Camry, RAV4 and even the Corolla. Toyota is finally giving a crap about style and fun. Well its mission would not be complete without bringing back its iconic sports car, the Supra and guess what – it’s back! The 2020 Supra will officially show up in showrooms this summer and we can’t be more excited to see Toyota add an additional sports car to its lineup.

The 2020 Toyota Supra does bring back some of the iconic traits that we’d expect from anything with a Supra badge on it. There’s a six-cylinder turbocharged engine, perfect 50:50 weight distribution and a sculpted body that takes styling traits from not only the past Supras, but even the 2000GT. While there are some familiarities, there’s a lot more that is completely different for the fifth-generation Supra.

It’s no secret that the sports car segment has changed significantly since the fourth-generation Supra A80 left the US at the end of the 90s. Today niche models are too expensive for an automaker to produce on its own. Look at the Mazda MX-5 Miata and the Fiat 124 Spider or the Toyota 86 and Subaru BRZ, they are close cousins.

Toyota couldn’t justify spending the money on its own to bring the Supra back, so it reached out to BMW. Why BMW? BMW is known for its excellent inline-six cylinder engines, which is something that was essential for the new Supra.

So what we end up with is the BMW Z4 and Toyota Supra being close cousins. Luckily they aren’t nearly identical like the 86 and BRZ, but under the skin both models share similar DNA.

To start with the Supra is powered by BMW’s twin-turbocharged 3.0L six-cylinder engine that generates 335 horsepower and 365 lb-ft. of torque. The six-cylinder is mated to an eight-speed ZF transmission. Sadly Toyota has no plans to offer a manual version. If you care, the Supra is rated at 24/31 mpg.

Although the Supra and Z4 have the same engine, the Z4 has more power at 382 hp. Yes the Supra has less horsepower than the Z4, but it isn’t a slug. The six-cylinder has a nice flat torque curve from 1,600 to 4,500 rpm. Toyota says that the Supra is now the quickest model its ever built with a 0-60 mph time of 4.1 seconds. The top speed is electronically limited to 155 mph.

On the outside it’s hard to tell to see how much BMW DNA has been injected into the GR Supra, but inside it’s a different story. The center stack looks like it came straight out of a BMW, the buttons are all the same and even the infotainment system is directly from BMW. For those drivers that have spent a lot of time in BMWs, it can be a bit confusing with the Toyota badge on the steering wheel, while everything else is clearly not from Japan.

BMW DNA aside, the 2020 GR Supra’s interior is snug, yet comfortable. The interior has ample space for two, although our taller friends will need to watch their heads when getting in.

Even if Toyota partnered with BMW to bring the Supra back, Toyota says that it took a lot of time to tweak the Supra on its own. This includes the suspension, steering and brakes. So even though the Supra is motivated by Germany, the rest is all from Japan, well at least in regards to how it drives.

The last generation Supra was more of a Grand Tourer than an agile track car. Everyone loves the A80, but for the A90, Toyota decided to focus more on agility and driving dynamics. To develop the Supra, Toyota benchmarked the Porsche Cayman S.

The perfect 50/50 weight distribution and 3,397 lb curb weight are great starting points, but then you also need to dig a bit deeper to see what else makes the new Supra so great. Like its double-joint McPherson strut front suspension and multi-link rear setup. An electronic differential also transfers power between the rear wheels when needed.

Press the start button and the Supra powers up with a nice growl. Around town and on the highway it’s a comfortable sports car, but put it in “Sport” mode and it really wakes up. In Sport mode the steering gets tighter, the throttle response is tweaked and the suspension gets more aggressive. Easily the favorite part of being in Sport mode is the crackle that you get from the exhaust – it’s addicting.

Throughout our drive in West Virginia, the Supra loved every corner we could throw at it. The Michelin Pilot Super Sport tires have lots of grip and the Supra’s nimble handling made it a joy on those back country roads.

Toyota gave us some time to wring the Supra out at Summit Point. While the 2020 Supra has been designed to be a bit more agile than the A80 and its excellent chassis and adaptive suspension are up to the task. On the track the Supra remained composed largely thanks to its super stiff structure. The six-cylinder is always ready to push the Supra further and the Brembo brakes are there to keep you from killing your new Supra.

Toyota might have benchmarked the Porsche Cayman for the Supra, but there’s one big difference, the price. The Supra is basically a bargain with a $49,990 starting price for the base 3.0 model. The Supra 3.0 Premium model starts at $53,990.

The conversation still centers around the fact that there’s so much BMW DNA in the GR Supra, but if it wasn’t for BMW there wouldn’t be a new Supra. And while we do wish that Toyota did put a bit more of its own touches in the interior, we have to give credit where it’s due. The Supra is back and with it comes Toyota’s best driver’s car.