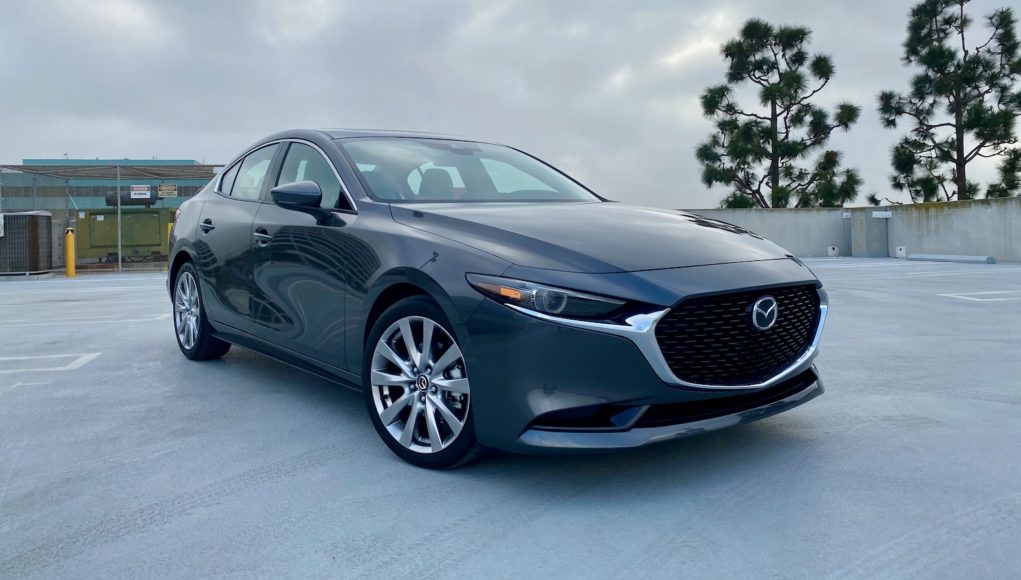 When the Mazda3 first entered the compact segment way back in 2003, it changed the way we thought of compact sedans and hatchbacks. The Mazda3 added a “premium” feel that the segment was largely missing and now 17 years later, Mazda is still positioning the Mazda3 as the more premium alternative in the crowded compact segment.

The 2020 Mazda3 easily feels a class above its two biggest rivals, the Honda Civic and Toyota Corolla. The Mazda3’s exterior has a more classy look than its crosstown rivals and inside you can easily mistake its interior from being from a luxury brand.

Starting with the exterior, the 2020 Mazda3 has a sculpted, yet classy look that’s basically the opposite of the somewhat polarizing Civic. The Mazda3 does is devoid of sharp lines to give it a smoother look. The sedan is handsomely styled, but if you want a slightly more aggressive look, you’ll want to go with the Mazda3 hatchback with its chunky c-pillar.

Inside the Mazda3 feels and looks like a compact luxury sedan. The minimalistic layout is clean and everything is wrapped in high quality materials. At the front of the driver, there’s a large digital speedometer that’s flanked by two analog gauges. At the top of the dash there’s a sleek 8.8-inch screen, which has the latest tech features, like Apple CarPlay and Android Auto. The only frustrating part about the new infotainment system is that it’s operated by a large console-mounted knob. It’s not as easy to use as a touchscreen and it can be a little distracting to try to use when you’re on the move.

Compared to the Corolla, the Mazda3’s interior dimensions are a bit closer, but it does have slightly more rear legroom than the Corolla at 35.1-inches vs 34.8-inches.

Under the hood there’s only one engine option, a 2.5-liter four-cylinder with 186 horsepower and 186 lb-ft. of torque that’s mated to a six-speed automatic transmission. That means that the Mazda 3 comes standard with more power than the Civic, Corolla or even the the new Nissan Sentra. The Mazda3 is also available with one feature that you can’t get on any other compact vehicle in its segment, besides the Subaru Impreza, all-wheel drive.

The naturally-aspirated 2.5-liter has pretty good power, but it lacks the low end punch that it’s turbocharged rivals offer. The engine is good around town, but even if it has more power on paper than the turbocharged Civic, the Mazda3 doesn’t feel very sporty. Which is somewhat of a disappointment considering how great the last generation felt.

If you go for the front-wheel drive, the Mazda3 is rated at 27 mpg city, 36 mpg highway and 30 mpg combined. Those specs are lower than the Corolla, which is rated at 29/37/32 mpg and the turbocharged Civic which is even more fuel efficient at 32/42/36 mpg.

The all-wheel drive Mazda3 is rated at 25 mpg city, 33 mpg highway and 28 mpg combined, which is lower than the Impreza. The most efficient version of the Impreza is rated at 28/36/31 mpg.

The 2020 Mazda3 represents a near perfect compact sedan and hatchback in the crowded segment. Its styling looks more upscale than its rivals and inside you could easily mistake it for a compact luxury vehicle. We do wish Mazda would inject a bit more fun into the Mazda3, which would probably help it get noticed more – hello bring back the Mazdaspeed3.