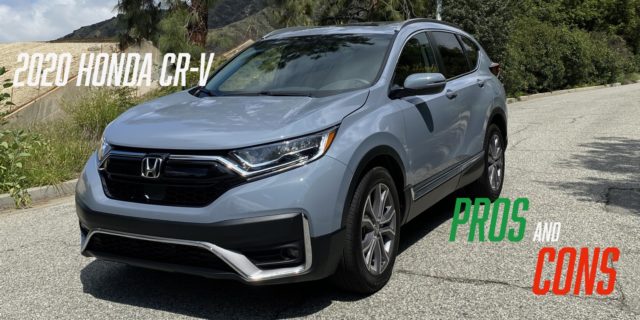 The Honda CR-V has been one of our favorite compact crossovers for years and it’s also no surprise that it’s one of the top selling models in its class. For the 2020 model year Honda has given the CR-V a light refresh and also introduced the first ever CR-V Hybrid.

While the CR-V is facing increased competition from longtime rival, the Toyota RAV4, the new Ford Escape and even the upcoming 2021 Rogue are going to continue to battle the CR-V. The good news is that there are very few things to complain about with the CR-V – meaning there are definitely more Pros than Cons.

Pro: The CR-V moves down the road with a level of confidence that sets it apart from the current Nissan Rogue and the Toyota RAV4. The suspension is well calibrated with out too much body roll and the steering is nicely weighted.

Pro: The 2020 CR-V says goodbye to the base 2.4-liter naturally-aspirated four-cylinder, which means that all the trim levels now come standard with a turbocharged 1.5-liter four-cylinder engine. The 1.5-liter engine generates 190 horsepower and 179 lb-ft. of torque, that’s mated to a CVT transmission. With front-wheel drive, the CR-V is rated at 28 mpg city, 34 mpg highway and 30 mpg combined. All-wheel drive makes the CR-V only slightly less fuel efficient with its 27/32/29 mpg rating.

Pro: The CR-V has a nice and spacious interior that will easily fit five passengers and all their gear. The front seats are big and comfy, while there’s plenty of legroom in the second row. The CR-V has 40.4-inches of rear legroom compared to 37.8-inches in the RAV4.

Pro: The CR-V Hybrid has now joined the lineup, which is the first Honda SUV to get a hybrid powertrain. The hybrid powertrain features two electric motors and a 2.0-liter four-cylinder Atkinson cycle engine. The CR-V’s two-motor system operates without the need for a conventional automatic transmission and generates a combined 212 horsepower. It’s rated at 40 mpg city, 35 mpg highway and 38 mpg combined.

Pro: The CR-V is available in four trim levels: LX, EX, EX-L and Touring. It comes standard with the Honda Sensing safety suite of driver assistance features, like automatic emergency braking, adaptive cruise control and a lane keeping system. A 7-inch touchscreen with Apple CarPlay and Android Auto, heated seats, a blind spot monitor, heated seats and a moonroof are standard on every trim level except the base CR-V LX.

Con: The CR-V’s infotainment system features a 7-inch touchscreen and the latest features, like Apple CarPlay and Android Auto. While those features are good additions, if you aren’t using either Apple or Google’s operating systems, the overall system feels a bit dated. The navigation system on the CR-V Touring looks a few years old and the overall system has the look and feel of an older system.

Con: The CR-V is only available with one transmission, a Continuously Variable Transmission (CVT). Around town the transmission does an adequate job without too much noise. Push it hard and you’re greeted with the lovely drone that plague most CVTs. The CVT also makes the CR-V feel a lot slower than it actually is.