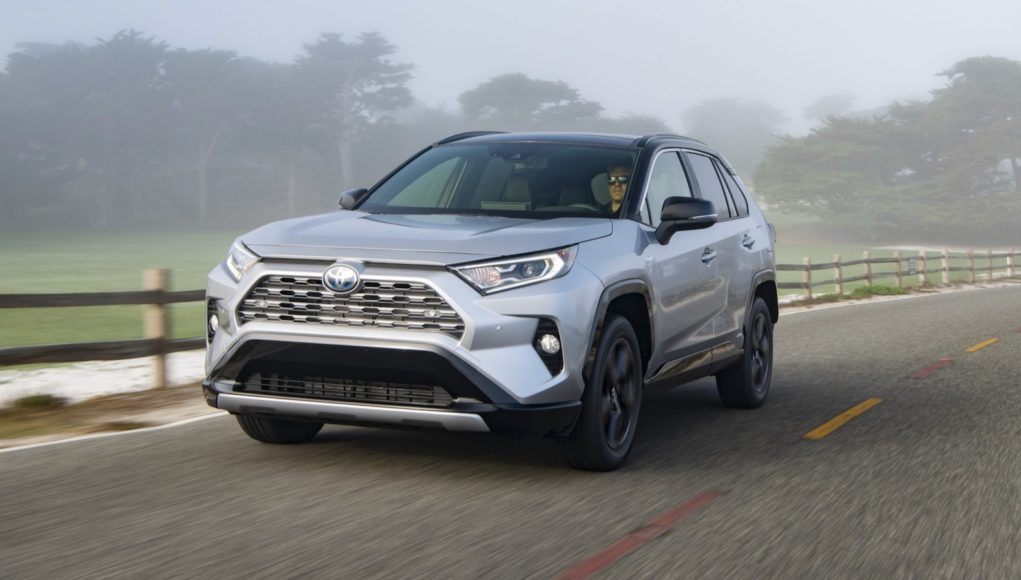 The 2020 Toyota RAV4 covers more bases this year with smartphone compatibility and tough-looking off-road trims. One of the most popular crossovers on the planet finally looks like it can go anywhere on earth, too. The 2020 Toyota RAV4 adds a TRD Off-Road trim level this year that bolsters the soft-roader’s trail-running resume and gives shoppers another reason to get lost. This year the RAV4 is available in LE, XLE, Adventure, TRD Off-Road, and Limited trim levels. The RAV4 Hybrid is offered in LE, XLE, XSE, and Limited trim levels.  The RAV4’s good looks go further in TRD Off-Road models. They add more off road-adjacent hardware and twin-tube shocks, chunky 18-inch wheels with all-terrain tires, and gray exterior accents.

Four average adults won’t have any problems fitting into the RAV4. Every RAV4 is equipped with automatic emergency braking, active lane control, adaptive cruise control, and automatic high beams. Blind-spot monitors are standard on most models, and a surround-view camera system is on the options list. The redesigned 2019 RAV4 earned top crash-test scores from safety officials, which should be peace of mind for small families and new-car buyers. Every RAV4 gets a 7.0-inch touchscreen with Apple CarPlay and Android Auto compatibility, Bluetooth connectivity, at least one USB port, and power features. Most RAV4s have five USB ports, dual-zone climate control, and options for heated seats.

The 2020 RAV4 swings for the fences and hits a stylish home run among compact crossovers. We’re still figuring out how the 2020 Toyota RAV4 can come from the same automaker as the Prius. To our eyes, the RAV4 is stylish without being brash, angular without being busy, trendy without being tired. The RAV4 channels the 4Runner and Tacoma in all the right ways. The mini off-roader may not have the hardware, but it certainly has the look, maybe that’s all you need?

In profile, the RAV4’s roof is low and stylish without overplaying its hand with too-small windows. The chunky fenders are a good look, but the fat rear roof pillar can compromise rear outward vision. The tail has high-mounted tail-lights that are connected with a small panel that can add contrast to the blocky rear end. Adventure and TRD Off-Road models add tougher-looking parts (even if they’re not completely functional) including a fake skid plate. RAV4 Hybrids have small differences in the front grille and bumpers, but are virtually identical to the others.

The news for the 2020 Toyota RAV4 is an available TRD Off-Road package that adds “mucho” to the already-macho soft-roader’s looks, just not much hardware. Every crossover, TRD Off-Road or otherwise, is powered by an inline-4. RAV4 Hybrids, which was our test vehicle, add an electric motor and batteries for better fuel efficiency. Gas-only RAV4’s are powered by a workaday 2.5-liter inline-4 paired to an 8-speed automatic that makes 203 hp. Front-wheel drive is standard on all crossovers, and all-wheel drive is optional on all trim levels except Adventure and TRD Off-Road, where it’s standard.

Toyota offers two all-wheel-drive systems in the RAV4: LE and XLE trims get a conventional system that shuttles power around unobtrusively; TRD Off-Road, Adventure, and Limited versions get an all-wheel-drive system that also uses the brakes to grip side-to-side. When the latter system detects slip in wheels, it brakes those wheels for better grip to the wheels that aren’t slipping. It’s a slick system but slightly dents fuel economy.

The RAV4 Hybrid adds a nickel-metal hydride battery and electric motor to the 2.5-liter inline-4 for 219 hp, and uses an electronic continuously variable automatic transmission (CVT) to keep the crossover efficient. Compared to the regular RAV4, the RAV4 Hybrid’s 39 mpg combined rating by the EPA is impressive. Compared to just about any other car on the road, the 39 mpg rating is impressive, too. The CVT works to keep the RAV4 Hybrid in low revs; stamp on the accelerator and the Hybrid growls just the same too. The RAV4 Hybrid is only available in all-wheel drive, but it’s not a slick setup like the RAV4 Adventure of TRD Off-Road trims. The RAV4 Hybrid can scramble to find traction and take a second or two.

Considering the extra weight, the RAV4 hybrid doesn’t ride roughly or poorly, it’s just as composed and calm as the RAV4 regular in our tests. The RAV4’s stiff frame and four-wheel independent suspension, struts in front with multi-link trailing wishbones in the rear, give the RAV4 a decent ride over rough bumps, but competitors such as the Subaru Forester and Honda CR-V are a little softer. Our test vehicle was an XSE Hybrid and if we have one critic it’s that the XSE, Adventure, and TRD Off-Road RAV4’s ride to firm for our taste.

The 2020 Toyota RAV4 is economical with its fuel compared to other compact crossovers. Spend more on the crossover and the RAV4 can be economical with its fuel compared to any other car on the road. The EPA rates front-wheel-drive versions of the 2020 RAV4 at 26 mpg city, 35 highway, 30 combined. Adding all-wheel drive doesn’t sink fuel economy either. The EPA rates most RAV4 AWD models at 25/33/28 mpg, with the base RAV4 LE with smaller wheels and all-wheel drive faring slightly better at 27/34/30 mpg.

Good active safety features complement great crash-test scores in the 2020 Toyota RAV4. Federal and independent safety officials give the RAV4 high marks for its crashworthiness. Standard automatic emergency braking on every model adds to the Toyota crossover’s impressive resume. The IIHS calls the 2020 RAV4 a Top Safety Pick thanks to its top “Good” scores in all crash tests, a front crash prevention system rated “Superior” at preventing forward crashes, and headlights that were rated as “Good” in Hybrid Limited trim with an optional package. Federal testers gave the RAV4 a top five-star overall rating.

Outside of the report card, the RAV4 is equipped with automatic emergency braking, active lane control, adaptive cruise control, and automatic high beams. Blind-spot monitors are standard on XLE and higher trim levels. That’s exceptional safety hardware and software for the RAV4 which could help save lives on the road.  We recommend the 2020 RAV4 XLE not only for the optional equipment covered below but also for its standard blind-spot monitors. The new RAV4’s body style makes some concessions to outward vision in the name of style.

The 2020 RAV4’s ruggedly stylish exterior continues into the interior. The RAV4’s dash is wide and horizontal, punctuated by a tablet-style touchscreen planted on top of the vents. There’s good storage inside that’s helpful, although it may be surrounded by cheaper-feeling plastic in lower trims. Most versions of the RAV4 have softer materials on the places that are frequently touched. The trims are differentiated by accent stitching and upholstery patterns, which we like. For example, the RAV4 TRD Off-Road gets red stitching on black synthetic leather upholstery, with a red accent in the center console and stitched headrest accents that play up the high-contrast, rugged feel.

Front passengers may want for more head room so taller riders may need to drive before you buy. Starting from the front seats, the available moonroof can cut into head room for taller passengers. This 6’1″ editors head hit the headliner while sitting in the driver’s seat so it had to be reclined. The spacious rear seats are a little lower and offer a little more head room. The seat bottoms are firm but still reasonably comfortable even for long trips. Three abreast in the back is possible, but not preferred for wider bodies. There are more than 37 inches of rear leg room, which should be enough for average builds.
Behind the second row is more than 37 cubic feet of cargo space is good by any measure, even in the hybrid version. The load floor is a little higher than other compact crossovers, including the 2020 Ford Escape, but the cutout is wide and the opening can accommodate big boxes. With the second row folded, the RAV4 holds about 69 cubic feet of cargo.

This year, the 2020 RAV4 adds a TRD Off-Road, based on the Adventure trim, to its lineup of LE, XLE, XLE Premium, and Limited trim levels for regular gas versions. RAV4 Hybrid models are available in LE, XLE, Limited, and XSE trims with hybrid versions equipped similarly to their gas-powered equivalents.. The 2020 RAV4 LE costs about $27,000, including destination, and includes cloth upholstery, 17-inch wheels with hubcaps, a split-folding rear seat, the 7.0-inch touchscreen, one USB port, and a suite of active safety features that we describe above.

A 2020 RAV4 XLE costs $28,265 for a gas-powered model or $30,515 for a hybrid model with all-wheel drive. The XLE adds 17-inch alloy wheels, fog lights, a power-adjustable driver’s seat, keyless ignition, five USB chargers, and more available options including heated seats and safety add-ons. The top RAV4 Limited models go all-in with synthetic leather upholstery, premium audio, 19-inch alloy wheels, and unique bumper. For $36,900 with all-wheel drive, the 2020 RAV4 Limited costs nearly as much as a Lexus NX, which has more power and nicer interior materials. All-wheel drive is optional and costs $1,400 but standard on Hybrid, Adventure, and TRD Off-Road RAV4s are equipped with all-wheel drive as standard equipment.

The 2020 Toyota RAV4 is a great competitor is the compact crossover class. It does everything you’d want with Toyota refinement and reliability, and in Hybrid versions, great fuel economy. If we were to buy one our money would be on the Hybrid XLE giving you the best of both worlds and avoiding the firmer suspension. However, Toyota ever at the front of the pack is getting ready to launch their all-new amazing 2021 RAV4 Prime plug-in hybrid with almost 40 miles of all-electric range. Stay tuned.