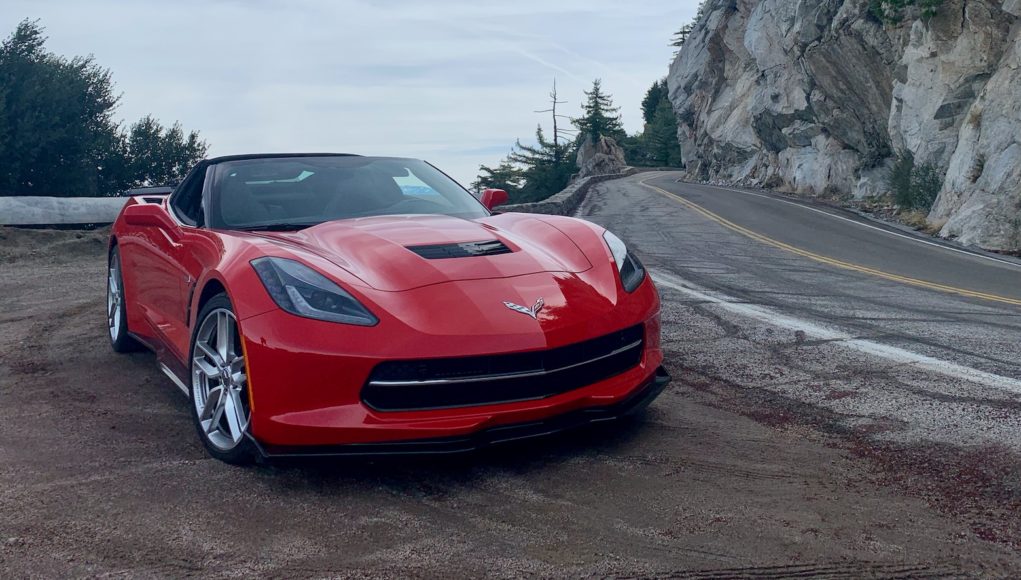 While GM has been focusing more on electrified models, like the Chevy Bolt, it’s great to see that it still builds excellent muscle cars, like the Chevy Camaro and Corvette. Both models are likely to get some big changes in the future, like a hybrid powertrain for the Camaro and an even bigger change for the Corvette – a switch to a mid-engine layout. But with the mid-engine C8 just around the corner, is the current generation Chevy Corvette (C7) showing its age?

Our tester was painted in eye catching Torch Red, while the optional carbon fiber ground effects package with its front splitter made it look like it was ready to eat the road. The Z51 Performance Package also adds an aero package with an aggressive rear spoiler to reduce lift, plus several performance upgrades, like larger front brakes, an electronic limited-slip differential and unique shocks, springs and stabilizer bars.

Inside the Corvette Z51 treads a fine line between comfort and sport with its 8-inch infotainment system, head-up display, heated and cooled seats, and Bose audio system. The Corvette’s seats manage to hug your body perfectly when you’re ready to carve up a mountain road, but then they’re also comfortable when you’re cruising down the freeway.

The interior is showing its age a bit when it comes to the available tech features. The Corvette features an 8-inch touchscreen with Apple CarPlay and Android Auto compatibility. The infotainment system does offer the latest tech, but it’s a bit slow to respond. There were several times that we had to touch the screen multiple times to get it to respond, which is likely due to being based on the old MyLink infotainment system. The Corvette is also missing the latest driver assistance tech, like adaptive cruise control, lane keeping assist or even a blind-spot monitor.

Open the door, slide into the seat and press the start button and the Corvette Z51 comes to life (sorry neighbors). The Corvette Z51 is powered by a punchy 6.2L V8 with 460 horsepower and 465 lb-ft. of torque that can be mated to either an eight-speed automatic or seven-speed manual with rev matching. Thankfully Chevy was kind enough to let us shift our own gears. There are also three drive modes depending on your mood: Touring, Sport and Track.

While you’ll find it hard to not have a smile on your face behind the wheel of the Corvette Stingray Z51, there are a few items that could be improved. For starters the rev matching feature is excellent, but it’s a little weird to turn it on or off with the steering wheel paddle shifters. Also the shifter could be a bit better, since it’s a little sloppy. Those few quibbles aside, the Corvette Z51’s naturally-aspirated V8 is always ready to play and the soundtrack is nearly perfect.

With a starting price set at $56,995 the 2019 Corvette is more attainable than several of its rivals, like the Jaguar F-Type. Sure its interior is showing its age, but the Corvette never lets you down with what’s important – having fun.