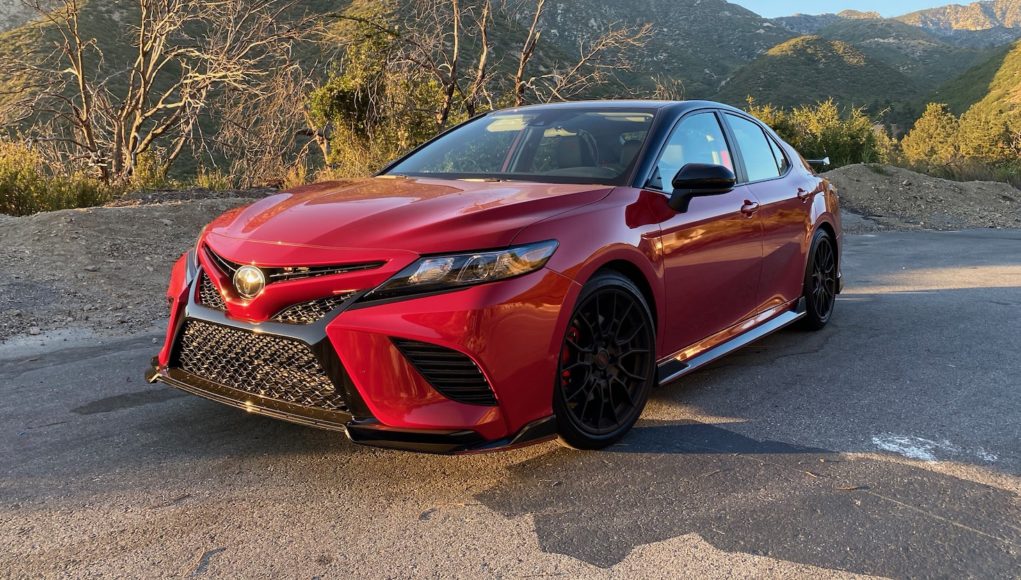 For years the Toyota Camry has won the hearts of midsize sedan buyers with its combination of features, reliability and overall value. But no one has hardly ever been able to describe the Camry as sporty. Well that now changes with the introduction of the 2020 Toyota Camry TRD. The Toyota Racing Development team has waved their magic wand at the Camry and what we have now is something surprising – a Camry that can be labeled as a sport sedan.

The transformation from a standard Camry to the Camry TRD involves not only a sporty body kit, but also several upgrades under the hood. On the outside, the Camry TRD gets an aggressive body kit that includes a front splitter, side aero skirts, trunk lid spoiler, and rear diffuser. At the rear there are also cat-back dual exhaust tips that provide a nice sound. The look is a bit boy racer, but at least you can’t call the Camry TRD boring. The ride height has also been reduced by 0.6-inch and the Camry TRD rides on 19-inch matte black alloy wheels, which are 3.1 pounds lighter than the XSE’s 19-inch wheels. The wheels can also be wrapped in Bridgestone Potenza summer tires.

The suspension has also been upgraded with stiffer springs and new front and rear anti-roll bars that tighten up the Camry’s roll stiffness by 44 percent and 67 percent, respectively. Lastly bigger brakes help the Camry TRD stop faster than the standard Camry.

There’s one area that the TRD team didn’t touch – the engine. The Camry TRD is powered by the same 3.0-liter V6 as the standard V6 powered Camry. It generates 301 horsepower and 267 pound-feet of torque and is mated to an eight-speed automatic transmission. the engine calibration and transmission’s tuning also wasn’t touched. It would be cool if the Camry TRD also came with all-wheel drive, but sadly the only AWD Camry you can get has the four-cylinder under the hood.

The Camry TRD is rated at 22 mpg city, 31 mpg highway and 25 mpg combined, which is 1 mpg less in each category compared to the V6 XSE.

Inside there aren’t any big changes, but you will notice the red seatbelts and the red contrast stitching on the dashboard, steering wheel, seats, and shifter. Lastly red TRD logos have been applied to the front headrests. We do wish that Toyota upgraded the front seats, since they lack lateral support, which means you’re going to slide around in the seat more than you’d want to.

The Camry TRD sits in the middle of the Camry lineup, so you’ll also notice that the interior is missing several items, like wireless charging or a head-up display. The Camry TRD also doesn’t come with a sunroof and it comes with a smaller 7-inch screen for the infotainment system compared to the 8-inch screen you get on the Camry XSE. In the rear we were also surprised to see the air vents deleted.

How does it drive? Press the start button and you’re greeted with a nice throaty sound thanks to the cat-back exhaust system. It’s a nice sound that you probably wouldn’t ever expect from a sedan with a Camry badge on it. Since there isn’t more power under the hood, the Camry TRD accelerates just like the six-cylinder Camry XSE and XLE models. Since the Camry TRD doesn’t have a turbocharged engine like its competitors, the naturally-aspirated V6 has to be pushed higher in its rev range to get it going.

We do wish that the transmission had been retuned a bit, since it’s geared more for efficiency and is sometimes a bit slow to downshift.

Thanks to the suspension upgrades and lower ride height, the Camry TRD hugs the road with very little body roll. The summer tires also help here and the upgraded brakes also reduce brake fade. The steering ratio is the same as the rest of the Camry lineup, which means that there isn’t any additional steering feedback, which we would have liked.

Overall although the upgrades seem small, it shows how capable the latest Camry already is. The Camry TRD is a fun, aggressively styled midsize sedan that isn’t for your grandma.