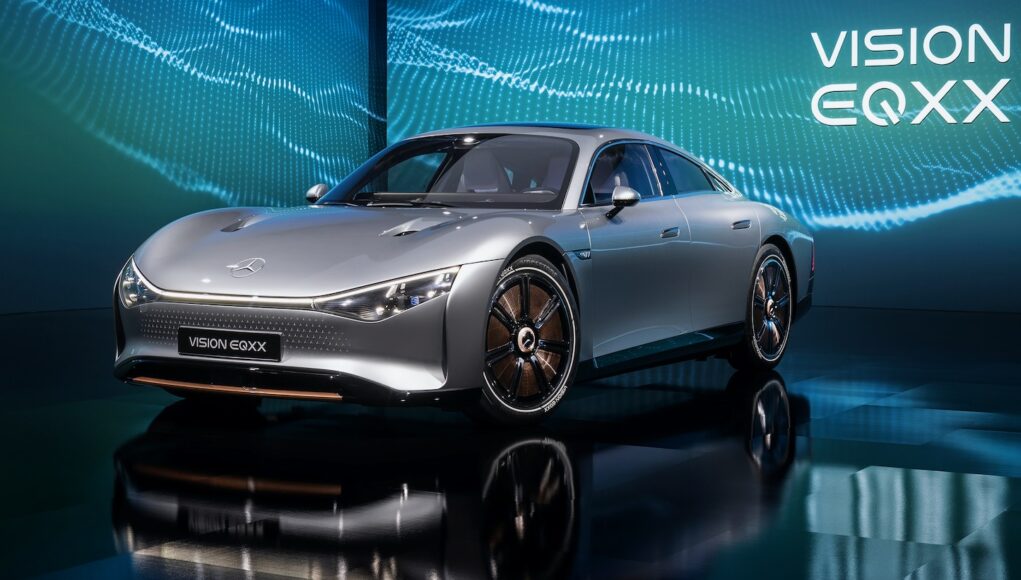 Mercedes-Benz has unveiled its latest concept, the Vision EQXX, which is debuting this week at CES in Las Vegas. The Vision EQXX concept is not all about horsepower, like some of the more recent EVs, but instead it prioritizes efficiency to give it a range over 620 miles on a single charge.

That long range beats the Lucid Air Dream’s 520-mile EPA rating, but Mercedes-Benz says that the range is not based on an EPA or WLTP estimate. Instead the 620 mile range figure is the result of “digital simulations based in real-life traffic conditions.” The EQXX only has 201 horsepower, but its range is impressive.

The EQXX is a compact sedan and it looks close to a production model, but it likely just previews what the brand has planned for its EV future. According to Mercedes-Benz, the EQXX is a “technology blueprint for series production.”

On the outside the EQXX features a sleek body with a drag coefficient of only 0.17. That sleek shape is part of the reason that the EQXX has such a long driving range. Mercedes-Benz says that the EQXX can travel six miles on only 1.0 kWh of electrical energy. The powertrain is also 95 percent efficient with only five percent of the energy that is put back into the battery pack not being used.

The EQXX is powered by a 900-volt battery pack and its battery is 50 percent smaller than the battery in the EQS. Mercedes-Benz has not revealed if the single motor powers the front or rear wheels. It does also get solar panels that can add up to 15 miles of range on a sunny day.

Inside the futuristic interior features an ELX screen that spans the entire width of the dashboard. It’s 47.5 inches wide and has 8K resolution with a 7680-by-660-pixel display. The interior is all about sustainability too with carpet made from bamboo and seats that are made out of either mushrooms or cactus fibers.